And he said, “Hear ye now, O house of David; Is it a small thing for you to weary men, but will you weary my God also? Therefore the Lord Himself will give you a sign: Behold, a virgin shall conceive, and bear a son, and shall call his name Immanuel.” Isaiah 7:13, 14

Eight hundred years before Christ was born, a small summit conference was being held in Jerusalem between Judah’s king and God’s prophet. King Ahaz and the prophet Isaiah were discussing the nation’s terrible plight. The king had to make a decision. It was a decision that would affect the lives of every person in Palestine, not only for a few years or decades, but, as history reveals, for thousands of years. History rarely forces a ruler to make a decision as momentous as the one Ahaz had before him.

King Ahaz was confronted with a severe crisis. The king of Israel and the king of Syria, the two kingdoms north of Judah, had banded together. They wanted to kill King Ahaz and set up a puppet king they could control in his place. These kings had not yet been successful in their attempts at overthrowing King Ahaz, but the followed the old axiom: “If at first you don’t succeed, try, try again.” This time they were more powerful than ever. Humanly speaking the odds were not in favor of King Ahaz, and he was well aware of it.

The continual invasion of Judah by two foreign armies had given the nation a bad case of the jitters. Although Jerusalem had not been captured, the land had been invaded. When the king and his people heard that war had broken out yet again, they were filled with fear.

The prophet of God came to the king and offered him immense comfort. Isaiah told King Ahaz that he had nothing to fear because the armies could not defeat him. He had God’s own promise to that effect. Hearing this should have given the king peace of mind, but Ahaz was anything but comforted by Isaiah’s news. He remained a troubled king.

All of this set the stage for the summit between Judah’s king and God’s prophet. Isaiah came to the king with a message from God: Ask for a sign. God had graciously sought to give the king all the assurance he would need that Jerusalem would not be conquered. All would be well if Ahaz would stand firm in his faith and trust God to defeat the enemy for him.

“Ask anything!” Isaiah says. After all, the request was going to the almighty, sovereign, covenant God. The One being asked was the great Creator of heaven and earth who had called all nations into being and who had set Ahaz on the throne. It was a blank check and Jehovah had signed it! All Ahaz had to do was write in the amount—any amount—and God would honor it.

His response sounds so pious. He replies, “I will not ask, neither will I tempt the Lord.” It is, however, a far from holy answer. King Ahaz had already made up his mind and was not about to be turned away from the decision that he had made. This earthly king rebuffed the sovereign God saying, in essence, “I do not need your sign. As a matter of fact, I do not need you. I can get out of this mess by myself.”

Then the anger of the Lord comes through the prophet Isaiah. He says, “Hear ye now, O house of David; Is it a small thing for you to weary men, but will you weary my God also? Therefore the Lord Himself will give you a sign.” Whether Ahaz wants it or not, God will give him a sign. The king may have his mind made up, but God is still in control and when the Almighty is determined to act, no king can refuse Him! And this shall be the sign: “Behold, a virgin shall conceive, and bear a son, and shall call his name Immanuel.”

Too often, when we read this passage, the idea is stressed that it is an announcement of a virgin birth. In the Hebrew, the word so often translated as “virgin” can also be translated as “young maiden.” We translate it today as “virgin” because we read back into the text our knowledge of Christ, the Son of God, born of the virgin, Mary. 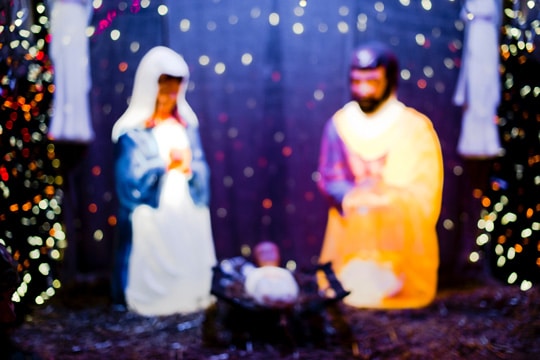 When Isaiah spoke, his usage of the word may well have meant “virgin,” but the word King Ahaz received in his mind was “young maiden.” To Ahaz, this really was no extraordinary sign. A young woman was to give birth? Big deal. It happened every day in the city. Except for the name of the baby, everything else appeared normal to King Ahaz.

To Isaiah, not only was the virgin birth unique, so was the name being given to the child. As a matter of fact, the baby’s name is the key to the sign. His name shall be “Immanuel” meaning “God with us.” The baby’s name should have told King Ahaz that God would be with him during this national crisis if only the king would trust Him. It was God’s way of saying to King Ahaz that he had nothing to fear.

The sign came with both a promise and a warning. The king is told that before this child would reach the age when he could tell right from wrong, the two kingdoms that threatened Jerusalem would be destroyed. In a short time the fearsome danger that hung over Judah like a black cloud would be blown away. That was the good news; the short–range forecast of this sign.

The long–range forecast was not so good. Terrible years would follow for King Ahaz and his people because of his refusal to trust completely in God. The sign indicated that a different nation would lay Judah low; not Syria or Israel, but Assyria.

That was quite a statement for the prophet to make at this summit conference. How could he possibly have known that King Ahaz had already made up his mind to strike up a bargain with Assyria to help Judah fight these two nations currently attacking him? Ahaz had been warned: God knew his plans.

At the summit’s end, the king still had a decision to make. A national crisis confronted him. What made this crisis so severe was that he would not trust God’s sign. The threat from the north was more real to him than the promise of God. Taking a large sum of money gathered from the national treasury and from the temple treasury, King Ahaz went to the emperor of Assyria and asked him to save him from the armies of Syria and Judah.

In response, the emperor marched out with his massive army and wiped out the two oppressing armies. In the short run, Ahaz’s strategy worked out just fine; but in the long run it backfired. The time came when the emperor of Assyria wondered if there was any more money in the treasuries of Judah. He took the same massive army that brought relief to Judah and forced Judah to become a vassal state to Assyria. From that time on Judah had been under foreign domination. King Ahaz has been called the Judas of the Old Testament because he sold out his country. Because King Ahaz would not accept God’s sign, he had to accept God’s judgment.

Over eight hundred years later, a couple got married. The young woman was expecting a baby and the young man was not the father. Instead, the Holy Spirit of God had created this life within the womb of the young girl. Matthew writes, “Now all this was done, that it might be fulfilled which was spoken of the Lord by the prophet, saying, ‘Behold a virgin shall be with child, and shall bring forth a son, and they shall call his name Emmanuel, which being interpreted is God with us’” (Matthew 1:22, 23).

It is at this point that the words of Isaiah become important to us. In Matthew 1, the sign that God gave to King Ahaz becomes the sign that God gives to us. Emmanuel still means “God with us.” The little child whose birth we celebrate this month is God with us. That is the good news that arches over all human history like a rainbow: God with us. We are not orphans; we are not forsaken or forlorn; we are not destined to be fugitives from God. He has promised to save us, and the sign of His presence is the Son of God breaking into human history at Bethlehem.

Do not take this part of the miracle of Christmas for granted. It boggles the mind to think that the infinite Creator of this vast universe—the edges of which have not yet been discovered—has chosen to make His home with us. Scripture asks, “Is anything to hard for God?” Mary asked a similar question when told she would become the virgin mother of God’s own son, “How can this be?” The answer given by the angel: “With God nothing is impossible.”

The worst thing that could ever happen to us would be for God to separate Himself from us, no longer being our Emmanuel. The results would be devastating, even as they were for King Ahaz. He lost everything.

When the prophet Isaiah met the king at the beginning of their summit, he said, “Ask the Lord your God for a sign.”

Ahaz refused. Isaiah responded by saying, “Will you try the patience of my God?” Not “your God” as before but “my God.” That subtle change indicated that the Lord had removed His grace from Ahaz. The king had alienated himself and his house from God. He traded the comfort of God’s presence for the protection of Assyria. He thought he had a better deal and lost everything.

Emmanuel is God’s gift to you in Jesus Christ. In this season and always, may God’s presence give you the comfort that escaped King Ahaz.