The First Death and the Son’s Wealth

My New Testament professor at seminary taught us to look for surprises in the parables. I see two of them when the son comes with his request to his father. The first surprise? His demand to receive his inheritance NOW. A responsible father would most certainly divide his possessions and land while he was still healthy. But that inheritance would rarely, if ever, pass to his sons BEFORE he died. You see, when this son demands his inheritance NOW, he is expressing his wish for the death of his father.

Can’t wait, gotta have it now, wish you were gone! He asks his father to jeopardize his own future and that of the rest of his family, in order to provide him with independent wealth to squander.

The second surprise? The father fulfills the son’s request! It would be harder in ancient times to come up with a more insidious corrosion of the father/son relationship than is found in the younger son’s request. In fact, I don’t think anyone would have blamed the father if he treated his son as dead, having forfeited the rights to his love and wealth. And yet, instead of slamming the door in his son’s face, the text literally says that he divides up his own life. He gives his life away so that his son might become rich. One-third to him, two-thirds to the eldest son, empire gone.

The Second Death and the Son’s Restoration

I hardly need to outline the details of younger son’s life since you know them. He sells what his father gives him and skips town. He journeys to a far country, which for the listeners meant outside of Israel among the Gentiles. He wasted his inheritance in some kind of dissolute fashion. His father’s work, his father’s life, his father’s name, his father’s inheritance, meant that little to him. Disaster soon struck. The money runs out and at the same time a drought infects the land. He is able to compel a citizen of the country to give him a job. He becomes the lowest of the low: a feeder of pigs. The pods the pigs ate were practically useless to a human, covered in black, bitter berries as they were. Look on the side for the nutritional value of the meal and you won’t find any. He is slowly starving to death.

His strategy for returning to his father is well thought out and not without sincerity. He will present himself as a hired servant. Not a bondsman, that is, a servant who lived as a part of the family and estate. Not one of the lower class slaves who also lived in-house. No, a hired servant, an independent man with his own income (verse19). “Father, I won’t take anymore of your wealth, I am outside of the family, I’m dead, I know that. I’ll live outside, and even begin to perhaps pay you back some of what I stole from you.” The son is convinced that the seriousness of his sin lay in stealing from his father’s hard-earned savings.

“I am no longer worthy to be called your son.” No kidding! Basically, he had treated his father as dead. He has wasted his beautiful inheritance among unclean Gentiles. He ended up feeding and living with pigs, those unclean animals. What do you think the citizens were thinking when they saw the prodigal coming through the gates of the village? “How dare you show your face around here again?” comes to mind. This parable seems headed for an unpromising conclusion.

There is only one thing that will cure this appalling scene, and that is a scene that is even more appalling in appearance. Keep your eyes on the father and you‘ll see another surprise. You see, noblemen in the ancient Middle East do not run with their expensive, flowing robes through the streets of the village (verse 20). Noblemen do not fall on the necks of unclean traitors like this man and kiss them. Except for this nobleman. The ugly sight of this rebellious son returning is overwhelmed by the unthinkable sight of his dignified father doing very undignified, unexpected things. The father takes the burden of shame upon himself. He dies again so that his son does not need to be ashamed and humiliated, but rather, restored.

Did you notice the change in the son’s words in verse 21? It’s the rehearsed lines, all right. Or is it? He leaves the crucial part out, the part about becoming a hired servant. Why? Because he has come apart at the seams, he has come undone, he has wilted, he has surrendered, he has given up and he has given in. He asks for no favors, no monthly repayment plan. Here is what he finally does: he confesses that he is dead unless someone else breathes life into him.

His father’s love convinced him. Nothing else. It is not as if his father’s actions have convinced him to think, “Hey, things are better than I thought, a robe, a ring, sandals, the whole bit. Forget the servant thing!” No! He repents, plain and simple. His father’s love has convinced him that the squandering of the inheritance was never the issue. The issue was always the covenant between himself and his father, the family relationship. The love of his father, in the context of his hatred and murder and waste and uncleanness and misery, finally drives him to the end of himself. One author writes, “Confession is not a transaction, not a negotiation in order to secure forgiveness; it is the after-the-last gasp of a corpse that finally can afford to admit it’s dead and accept resurrection. Forgiveness surrounds us, beats upon our lives.” 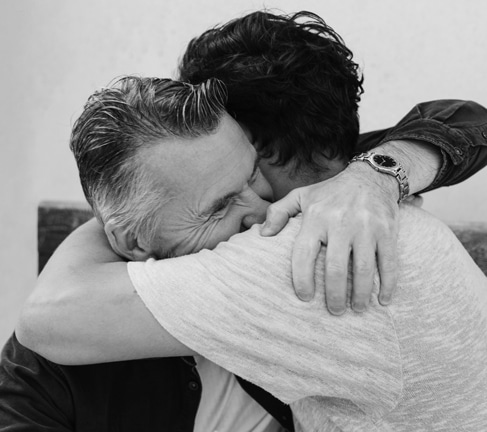 The Third Death and the Son’s Party

The third and final death occurs at the party. The calf has been getting fat, just waiting for a time like this to die. And the father who twice died on behalf of his son, the son he always loved, now throws a party because his son is back. And his son finally gets the picture.

The Pharisees complained of Jesus: “This man receive sinners and eats with them.” You had better believe it! Them and no others. Does this gospel sound almost too good to be true? You had better believe that, too! I wonder if we can find ourselves in this story. Have we returned home by losing our spiritual composure in the light of our sin? We’re not still bargaining with God, looking to make payments, wanting to remain hired servants, out of the household, away from His care and concern and judgment and discipline and love, are we?

Funny thing about grace. Only dead people understand it. And once they do, they begin to live for the first time. Life is found in the Son’s death and resurrection on that third day. That’s the gospel. And when that gospel infiltrates our lives more and more, the ultimate goal becomes attainable: the God of the gospel, the God of grace, receives the glory.

Rev. Mark Stewart is the pastor of the Newton Covenant Reformed Church in Newton, New Jersey.