I. THE RELATION OF THIS QUESTION TO THOSE THAT WERE ANSWERED PREVIOUSLY

In preceding Outlines it has been indicated that according to Scripture it is appointed unto men once to die. Also, that for the believer death is gain, and that this is true because of Christ’s substitutionary atonement. It has been shown, furthermore, that man consists of two parts, very closely related to each other, namely, body and soul (or, if you prefer, body and spirit). It has been proved that these souls survive physical death and that they exist forever and ever, a truth which is often called “the doctrine of immortality.” Nevertheless, as has also been indicated; in the sense in which Scripture employs the term God alone possesses immortality as an original, necessary, and eternal endowment; and, of all men, only those who are in Christ have received from him the gift of secondary or derived immortality by virtue of which they are destined for everlasting blessedness with respect to both soul and body. 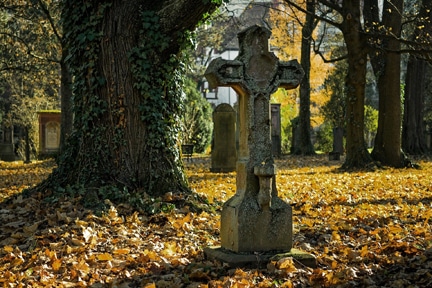 Granted that all this is true, and that, accordingly, at death the spirits of believers live on, just where do these spirits go? In other words, when God’s children die, do their souls go to heaven at once? And has this always been the case?

2. THE REASON WHY THIS SUBJECT MUST BE DISCUSSED

Ever so many people, who claim to believe in the Bible, are not at all sure that the souls of all believers who have died have gone to heaven. We have already contradicted the theory of those who teach that at death these souls simply go “out of existence” ( see Outline XXVIII) . But there are others. So, for example, the Roman Catholics believe that the souls of most believers go to purgatory, not at once to heaven. (We shall reserve the subject of purgatory for a later Outline.) And even among evangelical Protestants there are those who believe that thousands upon thousands of believers did not go directly to heaven at death. Before me lies a little book which contains many fine thoughts. The title is The Christian After Death. The author is R. E. Hough, Pastor of the Central Presbyterian Church, Jackson, Mississippi. The booklet is published by the Moody Press, Chicago, Illinois. Now, alongside of the many precious Scripture-truths that are found in this treatise there are also a few ideas with which I, for one, cannot agree. One of them is this, that until the ascension of Christ, the righteous at death went not to heaven but to paradise (cf. Luke 23:43). The author’s reasoning is as follows: Jesus, by means of his death “changed the abode of the disembodied believer…He unlocked the gate of paradise and set free the mighty host which had been awaiting the hour of his sacrifice, that he might lead them triumphantly into heaven” (pp. 42–47). We are told, moreover, that another name for paradise, this region of bliss which was not heaven, was Abraham’s bosom (cf. Luke 16:22).

3. THE TEACHING OF SCRIPTURE

The author seems to proceed from the premise that when two or more names are used to indicate where the children of God go when they die, there must be more than one place. A different name suggests to him a different place. But would it not be strange that for such a wonderful place as heaven there would be only one name? Why cannot “paradise,” “Abraham’s bosom,” and “heaven” indicate the same place, viewed now from one angle, then from another? Let us say that while you are traveling along the highway, a pretentious house suddenly comes into view. Now is the English language so poor that there is only one word that can properly describe this sumptuous edifice? It is not probable that this “house” will be referred to as “residence,” “mansion,” “dwelling,” and perhaps even “palace”? If this is true with respect to earthly objects of splendor or grandeur, why should it not be true with respect to heavenly?

The fact that “heaven” and “paradise” are simply different words that indicate the same place is clear from II Corinthians 12, compare verses 2 and 4. Here we read that someone was caught up to “the third heaven.” It may be assumed that the first heaven was that of the clouds, the second that of the stars, the third that of the redeemed. But we immediately notice that the man who, according to verse 2, was said to have been caught up to heaven was caught up to paradise, according to verse 4. This certainly proves that heaven and paradise indicate the same place and not two different places. And the same thing holds with respect to Abraham’s bosom. The fact that at death Abraham’s soul went to heaven is plainly stated in Scripture (Hebrews 11:10, 16; cf. Matthew 8:11). That the soul of God’s child goes to heaven at death is the clear and consistent teaching of Scripture. Says the Psalmist: “Thou wilt guide me with thy counsel, and afterward receive me to glory. Whom have I in heaven but thee…” (Psalm 73:24, 25). Surely the Father’s house with its many mansions is heaven (John 14:2). Our Lord at his ascension went “into heaven itself” (Hebrews 9:24). He went there as “our Forerunner” (Hebrews 6:20). To be “with Jesus” means, accordingly, to be in heaven. Now Jesus prayed, “Father, I will that they also whom thou hast given me be with me where I am, that they may behold my glory” (John 17:24). That the believer, at death, does not have to wait but goes to that place immediately is clear from II Corinthians 5: 8: “absent from the body…at home with the Lord.” For Paul “to depart” meant “to be with Christ,” hence, in heaven (Philippians 1:23). Last but not least, the passage that was read to you at the beginning of this lesson (Hebrews 12:18–24) assures us that right now “the general assembly and church of the firstborn” is “enrolled in heaven.”

1. What is the subject of this lesson, and why must it be discussed?

2. Prove from Scripture that heaven and paradise indicate the same place.

3. Where did Abraham go when he died? Prove it.

4, Prove from Scripture that in the here·after heaven is the abode of the soul of God’s child.

5. Prove that at death the believer immediately goes to heaven.

1. Give a fuller explanation of Hebrews 12, especially verses 22–24, than is given in the Outline.

2. Who was that man that was “caught up to the third heaven”?

3. What did that man experience when he was caught up to paradise? See II Corinthians 12:4 and 7. Is there any lesson in this for us?

4. When his life on earth was finished, where did Enoch go? And Elijah?

5. According to the belief of the heathen in Paul’s day, what happened to the soul at death? See I Thessalonians 4:13 (discussed on pp. 109–111 of my New Testament Commentary on I and II Thessalonians). Contrast the Christian view. How does I Thessalonians 3:13 prove that at death the soul of the believer goes to heaven?