The above phrase is found at the beginning of a list in which the kings of the ancient city of Sumer are enumerated. The phrase should serve as an appropriate title of the subsequent article, which intends to discuss certain aspects of the ideology of divine kingship in the light of biblical revelation.

God’s Revelation and the “Life Situation”

God’s revelation to man, although truly supernatural in character, never ignores but always enters into the stream of thought which happens to prevail at the time a particular revelation is given. The divine revelation, both as to content and effect, always stands in direct antithesis with the products of human thought, insofar as the latter has been guided by the principles of man’s would-be autonomous reason.

This antithetical nature of the divine revelation will at one time be more apparent than at another. When God’s revelation takes issue with a specific error, when it exposes the human fallacy of that error, it is the negative aspect of the antithesis which is in the foreground. At other times God’s teaching to man is of a more positive nature. Instead of seeking to destroy sinful thought-patterns it builds up its own, divinely inspired thoughts to such an impressive testimony that no merely human ideology has a chance to survive after being confronted by it.

It is commonly thought today, and not without good reason, that the ancient Semitics, and people of related cultures, were adherents of the ideology of divine kingship. According to their belief earthly kings had some real connection with, or derived their origin from the deity. The quotation on which the title of this article is based is only a small part of an overwhelming amount of evidence which has been adduced to prove that such a belief in the divinity of kingship actually existed in the ancient world. 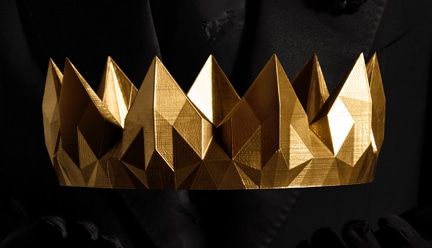 If what has been said earlier about the nature of God’s revelation and its relation to the products of human thought at any given time has been correct, it stands to reason that the belief in the divinity of kings will also be reflected in the revelation which came to man at that time. The devastating results modern critical research has had for faith and life should not induce us to close our eyes to the valuable contributions it has made for a better understanding of the circumstances out of which God’s Word arose, or rather into which it made itself to be heard. And it is precisely modern criticism of the biblical records which has never grown weary of pointing out the lively interaction and the immediate relevancy of a particular writing to the circumstances and situations which prevailed at the time of writing. Without in any way adopting the view of those who find the scope of a certain portion of Scripture limited entirely to the Life Situation from which it is supposed to have arisen, we must recognize the truth that God’s revelation was indeed challenging the existing systems of thought the very moment this revelation was uttered. Wherever God’s Word and the Life Situation were found to be in conflict, the former would seek to challenge the latter.

In this article we shall confine ourselves to one aspect of the ideology of divine kingship, namely to the speculations concerning the Urmensch, or primeval man. In our investigations we shall have to keep in mind that God’s revelation never quite “finds” a certain Life Situation as something entirely new, since every error which is “found” in a particular Life Situation constitutes a departure from truth. And truth is always revealed, whether inwardly in the conscience of man, or outwardly in nature or in Scripture. God’s revelation to man after the fall finds man in the situation of a sinner, who has distorted and suppressed the revelation which God has given to him and is still giving to him. We see this very clearly in the primeval man speculations. They point out that man’s original position was one of royal dignity and grandeur. At the same time they contain an element of suffering and evil, which forms, so to say, the negative side of primeval man. The Bible student will recognize that the element of royal dignity has been associated with man from the moment he is introduced upon the scene of history (Gen. 1:26; Ps. 8:5, 6). Man’s royal dominion before the fall was different from what it because after the fall. Before the fall the king, who himself is subject to God, must rule and prepare this created world for his Lord and God, he must rule the cosmos not with the rod but with the shepherd’s crook, he must cultivate the soil of his realm in order that the sovereign God may be served from what is his. This can only be done by one who is sinless. For sin is defeat, slavery, bondage. Only he who obeys is truly free (John 8:34). In paradise man’s kingly function in principle agreed with the theocratic ideal. Man’s dominion, according to Hodge, was “absolutely universal,” “so far as creatures are concerned.” But, as Hodge points out further, “this universal dominion…has been realized and attained only by the incarnation and exaltation of the Son of God” (Hodge, Systematic Theology II, p. 102ff.). The second Adam, in other words, will again restore the kingly function to its original destination.

The Royal Tradition in Myth and Legend

Let us see what has become of the tradition of man’s royal dignity in the myths and legends of the apostate cultures. It is of the very nature of apostate thinking that it puts man on the throne and seeks to dethrone God. It is that type of thinking that we meet with in the primeval man ideologies. The theme of a heroic figure of god-like proportions and of cosmical significance is developed in the systems of thought of Greek-Hellenistic coloring, such as the Hermetic literature, the philosophy of Philo, and the Gnostic theories. According to a certain group of Old Testament scholars it is this type of figure, which after having undergone certain modifications and adaptations can be found back in biblical characters like Adam, Moses, the Servant of the Lord and the theocratic kings.

We will not here enter into the question to what extent we may assume that the secondary authors of the Bible used material from ancient myth and legend in the composition of their divinely inspired writings. Mere reference to mythical occurrences or persons need not be precluded by those who hold to the verbal inspiration of the Scriptures.

An altogether different matter is whether certain events and persons of which mention is made in the Bible may be considered as having their common origin in the fertile soil of ancient myth. May we assume that the Son of Man figure, to mention just one example, is nothing than an adaptation of the legendary person of the primeval man? And if we would find certain resemblances between the two are we then justified in deriving both from a common root? To these questions the answer can only be a negative one if we shall take the consistent claims of the Bible with regard to its divine uniqueness seriously.

The student of the history of human thought will observe that man’s thinking is kept in the balance between rationalism and irrationalism. The pendulum will either swing one way or the other, or an attempt will be made to reconcile the two, as has been done in post-Kantian thinking and its corresponding theological systems. Non-Christian philosophy is basically monistic in its assumptions. It rejects the idea of an absolute creation out. of nothing and consequently its principle of interpretation is caught in the dialectic of the rational and the irrational, the latter two concept.s in non-Christian thinking being always correlative to one another.

The biblical representation of an absolute creation, marking the beginning of history, and the biblical idea of an historical fall into sin avoids these two difficulties of non-theistic thinking aim is utterly opposed to them. It is wrong therefore to link up the person of the biblical Adam with the speculations of a primeval man and with the so-called ideology of divine kingship. The two simply cannot be identified or even related to each other in anything but an antithetical fashion.

We as well as the composer of the Sumerian King list believe that “kingship was lowered from heaven,” just as much as we believe that all the other excellent gifts wherewith God’s creature was endowed were heavenly gifts. But “heavenly” in our terminology does not always mean the same as partaking in the sense of an intermixture, of the nature of him who dwells in heaven. Theistic thinking will allow for the heavenly character of Adam’s royal dominion without committing the mistake of assuming a transition, however imperceptible, between that which is heavenly and that which is earthly, between the Creator and the creature.

Adam’s royal dominion was due to a heavenly gift. It was not clue to an emanation from the godhead. Adam failed miserably in carrying out the theocratic mandate which was given to him. Someone Else, called the second Adam, the Son of Man, the Son of David, would have to come to fulfill the theocratic mandate by rendering unto God what is God’s and by rendering unto his subjects what is theirs: “He shall judge the poor of the people, he shall save the children of the needy, and shall break in pieces the oppressor” (Ps. 72:4). This second Adam will fulfill the demands which the first Adam failed to keep. This again will involve him in suffering, for in order to take away the first Adam’s burden of sin he will have to satisfy a holy God.

The kingship which in a very real way was lowered from heaven found in Adam an unworthy representative. The theocratic ideal was not safe with him who made common cause with the enemy of that God whose dominion is over all things. After Adam’s failure man has vainly tried to retain his royal prerogatives. The only way in whim sinful man could possibly do this was my creating a figure who was a mixture of the divine and the human. Thus man sought to escape the haunting notion of sin and guilt.

When man proved unable to lift the heavenly gift of royal dignity with pure hands to God who gave it, it became necessary for God himself to descend from heaven, to assume human flesh, in order that thus, through the divine indwelling in man, there would be another Man to lift that heavenly gift in wholehearted love and devotion up to the One who gave it. That will be when Christ shall give up all power and dominion unto the Father so that God will be all in all.