Whenever a disaster like Hurricane Katrina strikes us, people always ask the question, “Where was God?” or “How could God allow this?” One very wrong answer is that God did not do it. It is wrong for us to think that this was brought about simply by natural forces or the devil. No. The Bible tells us that the weather (along with everything else) is in God’s hand. Consider the following Bible verses:

Whatever the LORD pleases He does in heaven and in earth; in the seas and in all deep places. He causes the vapors to ascend from the ends of the earth; He makes lightning for the rain; He brings the wind out of His treasuries. (Psalm 135:6–7). 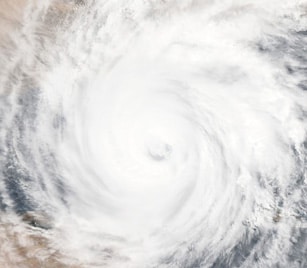 If there is calamity in the city, will not the LORD have done it. (Amos 3:6)?

Clearly, the Bible teaches that the natural events of the world, including rain and storms, are caused by the living and true God. They are not chance events but actions directed by the hand of God. Why, then, would God send Hurricane Katrina to New Orleans and bring about such devastation and death? One way that people often try to answer this question is by saying that they were worse sinners than anybody else.

In Jesus’ day, there were tragedies like our own. One of those tragedies was when the Roman governor slaughtered some of the people of the region of Galilee, which is where Jesus lived and worked. Jesus asked them this question, “Do you suppose that these Galileans were worse sinners than all other Galileans, because they suffered such thing” (Luke 13:2)?

Rather, Jesus brings it back to us, “But unless you repent, you shall all likewise perish.” In other words, a disaster is a good time to think about sin and judgment–not the sin of those who perish, but ours! And so Hurricane Katrina should make us think about God’s wrath against sin and God’s judgment, but not about the sin of the people of New Orleans. It should cause us to think about our own sin.

Jesus is raising our question one step higher. We are inclined to ask, “Why did they die in this way?” We should be asking, “Why is there death at all?” The Bible says, “The wages of sin is death” (Romans 6:23). Death is not something that had to happen to humanity. Man was created good. It is only because man sinned against God that he has to die, and so death is neither normal nor natural.

But why do we have to die for our sin? Because God is just and holy. God is just, and so he must punish sin. “He will by no means clear the guilty (Exodus 34:7). If someone breaks His law, then God will punish that person with death. This is what God promised to Adam, “In the day you eat of it, you will surely die.” God said that sin must merit death, and God does not lie.

God’s holiness means that He cannot have sin in His presence. He must be separate from it. That is why there is a hell. God removes sin from His presence. “You are of purer eyes than to behold evil, and cannot look on wickedness” (Habakkuk 1:13). God hates sin and cannot tolerate it. And so let us not think that physical death is the end. Afterwards, there is an eternal hell (Luke 16:22-23). Jesus said, “Fear Him who, after he has killed, has power to cast into hell; yes, I say to you, fear Him” (Luke 12:5)!

But how slow we are to think of physical death, much less what comes after! We go about our lives as if things will always go on the way they have. We would never expect that a flood would come in and totally change our lives forever! That is what Jesus says catastrophes are for. “Unless you repent, you shall all likewise perish.” It wakes us out of our stupor and confronts us with the fact that we must perish.

We are all inclined to ignore that fact. Imagine if everyone lived to a hundred years old and died peacefully. How little we would think about death! But we should. Death should be enough to wake us all out of our mental and spiritual sleep, but we generally ignore it. That is why sometimes God sends death in different ways than what we think of as normal. It wakes us up to what we all should have already thought about, “I am going to perish, if I don’t repent.”

And so what should we do? We should repent. We should not look at the sin of others but our own. We must turn from our sin unto Jesus Christ. This means that we should admit the fact that we are sinners and worthy of death. We should commit to turning away from sin. And we should turn to Jesus Christ.

Jesus Christ did what we could not do. He never sinned against God, but He died anyway. Why? Not for His sin but for ours! Even though we were all made sinners and condemned to death in Adam, we can be forgiven in Christ and given eternal life: “By One Man’s obedience, many will be made righteous.” “As in Adam all die, so in Christ all shall be made alive!” And if you receive Christ, though you die physically, it will only be to prepare you for greater glory. Jesus said, “I am the resurrection and the life. He who believes in Me, though he may die, he shall live” (John 11:25).

And so, have you learned this lesson? Are you in Christ? Have you received Him and committed to follow Him and leave the sinful world behind? That is what Jesus is calling you to do today.

One question that is rarely asked but should be is, “Why are we still here at all?” If sin brings death, and we have sinned, then shouldn’t we be dead? The answer to that is found in the word “repent.” God is giving you time to turn from your sin and unto Him. So, do it today and do not delay! Who could have imagined at the beginning of the summer that New Orleans would be completely flooded and abandoned? That all those people would lose their homes and many of them their lives?

In the same way, you don’t know what a few months will bring you. Profit from the time that God has given you to seek Him while you can. And rest assured. If you seek Him, He will surely be found.