The Church and Politics

A five year controversy between the clergymen and the laymen of the National Council of Churches was recently “disclosed” from the laymen’s side in the U.S. News and World Report (Feb. 3, 1956, pp. 43–48). Mr. J. Howard Pew, former president of the Sun Oil Company, reports that the 190 member Laymen’s Committee, which was dissolved by the clergymen last year and of which he was chairman, was opposed to the church’s involvement in political, social. and economic questions. The laymen claim that when the National Council was formed in 1950 they were assured that an attempt would be made to avoid the “political involvements and controversies” of its predecessor, the Federal Council of Churches. Failure to keep this promise and the consequent disolvement of the Laymen’s Committee is referred to as the failure of this important effort to bring about an enduring partnership between clergy and laity.”

The argument of the Laymen’s Committee, or at least of its erstwhile chairman, is not altogether clear. Their opposition seems to include various elements. They oppose the church’s engagement in political matters. At the same ti.me it is said that some of these economic or political matters have no “moral or ethical content.” And underlying the entire criticism is the contention that the declarations of the clergymen of the National Council involve an expanded staten with socialistic tendencies and actions which sometimes play into the hands of the Communists.

Editorial reaction from the Christian Century was not long in coming, (Feb. 22, 1956, pp. 229–231). The heart of the issue is considered to be Mr. Pew who is described as “ultra-conservative…on practically all public issues.” The editorial correctly points out that there are “moral and ethical” questions in every issue. But the important distinction between the activity of the church as church and the activities and duties of Christians in the various spheres of society is not understood. This failure has involved the Christian Century in the fantastic claim that Mr. Pew’s criticism binds him with Krushev and Bulganin in the amazing conviction that “Christians should keep quiet about politics.”

Confused thinking on the important issues involved in the Laymen’s criticism, apart from its many weaknesses, is strikingly illustrated in the Christian Century of February 29, 1956, pp. 261–263. In this editorial, in which reference is again made to the Pew criticism, Billy Graham comes i,n for harsh criticism for mixing politics with evangelism. And it must be said that Graham deserves the criticism. But it would seem that the chief reason for the Christian Century’s criticism this time is due to the kind of politics Graham displayed as well as the kind of gospel he preached. Jn an interesting turn of face the editorial states that if Americans overseas “identify their Christian mission in any way with the political or military policies and enterprises of their nation, they qualify, undercut, jeopardize their whole testimony…” Work and pray for a of nation’s victory, but don’t compromise the church by making it even look like an instrument in the nation’s struggle. 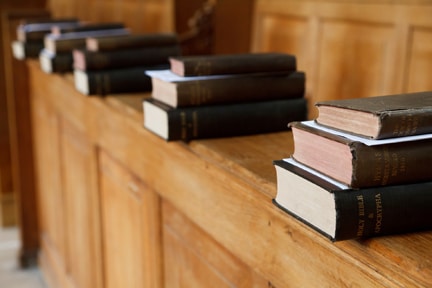 Prof. C.C. Berkouwer of the Free University writes on the above subject in Gereformeerd Weekblad of Feb. 10, 1956. The occasion for Berkouwer’s comment is the view expressed by a certain Dr. R. Szekeres in his inaugural address as professor of the Protestant faculty at Brussels. In predominantly Roman Catholic Belgium, this new Protestant faculty has an important opportunity. Some Dutch professors, Dr. Bronkhorst and Dr. Schooneveld e.g., are also members of this faculty.

After referring to other statements in the address, Prof. Berkouwer rejects this distinction between theology and philosophy. “The problem of the relation between theology and philosophy is not simple,” says Berkouwer, “The last word has not yet been spoken. But one has already made progress if he sees that the problem can never be solved in this way…”

Implying the similarity of Prof. Szekeres to the Roman Catholic conception of theology and philosophy, Berkouwer adds that this kind of approach will certainly make no impression in Belgium.

The current interest in the problem of the relation of theology and philosophy is indicated by Berkouwer’s reference to the fact that Prof. H. Dooyewerd also spoke recently on this subject at the annual meeting of the Society for Calvinistic Philosophy.

The ninth volume has been added to Prof. Berkouwer’s important series “Studies in Dogmatics.” The latest volume in this rapidly growing series is entitled De Verkiezing Gods. Although this is not the place for a review of its contents, it can certainly be said that this volume will also receive a great deal of attention. The subject of election awakens interest and opposition.

One can not avoid amazement at Berkouwer’s productivity. The first volumes of the series appeared in 1949 and now, six years later, the total has reached nine. In addition to this Berkouwer has also written a Significant volume on Karl Barth as well as unnmerous articles for various periodicals. Five volumes in the series have already appeared in English translation. We pray that God will grant the author strength and grace to write the ten additional volumes planned to complete the “Studies in Dogmatics.”

An Important Book on Niebuhr

The second volume in an impressive series, The Library of Living Theology, is devoted to a study of the religious, social and political thought of Reinhold Niebuhr, Professor of Christian Ethics at Union Theological Seminary, New York. The Religious Book Club has made this book its selection for February.

In accordance with the plan of the series, the first chapter is an intellectual autobiography in which Niebuhr “traces his life, the forces, and the people influential in his development.” The main part of the book consists of essays by twenty writers of various positions who examine and evaluate Niebuhr’s work. Among these are Emil Brunner, Paul Tillich, John C. Bennett, Richard Kroner, Alan Richardson, Henry Nelson Wieman, Edward J. Carnell. The editors indicate that Karl Barth, Martin Buber and Arnold Toynbee expressed their regret in being unable to accept the invitation to participate in the Niebuhr volume.

In the final section Niebuhr himself replies to the comments of the twenty critics. It is interesting to note that Edward J. Carnell, President of Fuller Theological Seminary, is the contributor who represents the position of orthodox Christianity. In his reply Niebuhr states: “I do not know whether Professor Carnell would regard his criticism of my thought as substantive; but I do not, because he agrees with me up to the point of verifying the Christian faith in the experience of redemption” (p. 443).

The value of this work is enhanced by an up-to-date bibliography of Niebuhr’s numerous books and articles, arranged chronologically. This list covers twenty-four pages. An extensive index is added.

Reinhold Niebuhr “dreads the prospect” of a crusade by Billy Graham in Manhattan, tentatively planned for 1951, Although Niebuhr brings up various factors in his apprehension, perhaps the most serious criticism is of Graham’s message. “Billy Graham is a personable, modest and appealing young man,” says Niebuhr, “who has wedded considerable dramatic and demagogic gifts with a rather obscurantist version of the Christian faith. His message is not completely irrelevant to the broader social issues of the day, but it approaches irrelevance…” Christianity and Crisis, March, (1956, p. 18). He objects further to Graham’s “presenting of Christianity as a series of simple answers to complex questions…” (See also Time, March 12, 1956, p. 92). For another criticism of Graham’s message see the Christian Century of February 29, 1956, pp. 261–263.