The Free University – Church and State

During October the Free University of Amsterdam celebrated its seventy.fifth anniversary. The Reformed people of the Netherlands had good reason to rejoice in the progress of their university. It was begun in 1880 with a faculty of five, a student body of three and no campus. Today it has become a significant institution with a faculty of more than one hundred and an enrollment of two thousand.

Dr. C. Gerretson, professor of law at the University of Utrecht, has written a challenging article in the liberal Dutch newspaper, De Telegraaf (October 22, 1955), in which he calls the whole Dutch nation to join in this celebration because of what the founding of this university has meant for the entire question of the relation of church and state to higher education. The argument is instructive for Americans also. Professor Gerretson makes the point that the founding of the Free University, free from both church and state but established upon a Reformed confessional basis, was the solution to a three century long struggle between church and state. Professor Gerretson shows from Holland’s history how the party in power always tried to monopolize the whole educational system. He maintains that the same attempt can be seen today. Not only does the Free University represent the viewpoint of a certain group or party, but its so-called neutral neighbor, the City University of Amsterdam, supported by the state, really represents a viewpoint and a party also the liberal position. Even a great deal of the opposition which the Free University has experienced in the past, Gerretson notes, was usually motivated by that ever recurring attempt of the party in power to gain or to maintain a monopoly.

Professor Gerretson concludes his significant article with these words:

It is a good thing therefore that the freedom of special higher education (that is, like the Free University on a Reformed basis, FHK) has been legally established and that it has also been realized in practice by granting financial equality with public education. The paramount significance of this for the nation lies in the fact that the right of the minority, which right is facing extinction in the political world, has been potentially maintained in the scientific and scholarly world. The separation of church and state and the freedom of education are inseparately related both historically and actually. The “good of the people,” the common good, does not result from a forced uniformity (eenheid) but from a harmonious union (eendracht) ill which the different spiritual groups cooperate together upon the basis of legal equality.

These ideas are relevant to the American scene as well, where a strange emotionalism often colors discussion of the relation of church and state. In the United States it was Dr. Conant, then president of Harvard University, who said that private schools were undemocratic. And rumblings have recently been heard in Canada also. Even in a democracy there is the struggle for monopoly and it may often be camouflaged by the idol of neutrality. 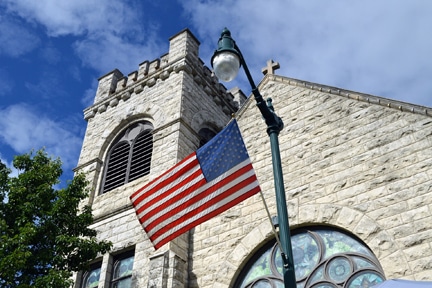 In spite of some outspoken opposition to private and Christian schools (see above), much discussion is being devoted to the place of religion in the curriculum. Russell J. Compton, professor of philosophy at De Pauw University, defends the thesis “that Christian education could become the most adequate liberal education” (The Journal of Bible and Religion, October 1955, “Christianity and Liberal Education”).

An interesting symposium on “The Place of Religion in the Curricula of State Universities” is contained in the journal, Religious Education (September–October, 1955; cf. also July–August, 1955, for the symposium on “Religion in the Public Schools”). Attention is called to the contribution of Walton Bean, professor of history at the University of California, entitled: “Historical Developments Affecting the Place of Religion in the State University Curriculum.” In the same issue David W. Louisell, professor of law at the University of Minnesota, discusses “Constitutional Limitations and Supports for Dealing with Religion in Public Higher Education.” After a survey of the major cases affecting this subject (McCollum, Everson, etc.), Prof. Louisell says: “It now seems to me reasonably safe to conclude that the federal constitution in no way prohibits the treatment of theology or religion in public institutions of higher learning in a non-discriminatory manner and on a scholarly level consistent with the intellectual life of higher education” (p. 289). The author emphasizes that the First Amendment not only prohibits the establishment of religion but also forbids legislation which would prohibit the free exercise of religion itself.

In the same issue Professor George Forell of the University of Iowa, which has a School of Religion, pleads for the teaching of theology in the state universities : “Theology is important intrinsically and necessary for an understanding of the aspirations of man and because it is important for an understanding of our culture. It is almost impossible to understand western culture without knowing something about the theological issues that have motivated western man many times.”

To theologians and philosophers, November 11, 1955, was not only Armistice Day, but also the centennial of the death of that “melancholy Dane,” Soren Kierkegaard. The event is being widely celebrated this year throughout the world. Kierkegaard has had great influence in the theology and philosophy of today. The existentialist philosophers and dialectical theologians like Karl Barth have been influenced by him even though little attention was given to Kierkegaard when he lived.

An entire issue of Theology Today (October, 1955) is devoted to an interpretation and exposition of “the abiding significance of Kierkegaard.” In April of this year the Princeton University Press published another of Walter Lowrie’s translations of Kierkegaards’s writings which was given the title, On Authority and Revelation, The Book on Adler. This Princeton professor, Walter Lowrie, has become the major English translator of Kierkegaard’s works. Appreciation for Kierkegaard seems to have grown at Princeton, as it has throughout the world. This issue of Theology Today is worthy of careful study in order to become better acquainted with one of the major influences in current theological thought. Especially challenging is the article by Carl Michalson, professor of systematic theology at Drew Theological Seminary, in which he makes the claim that “Existentialism is a Mysticism.”

What Happened to Princeton and American Calvinism?

Sydney E. Ahlstrom of Yale University has written a provocative article on “The Scottish Philosophy and American Theology” (Church History, September, 1955, pp. 257–272). Although he deals with other centers, special attention is given to the nerve center of Presbyterianism. Common Sense Realism entered Princeton via John Witherspoon and was passed on through Archibald Alexander to Charles Hodge. Ahlstrom claims that Hodge was “caught up in the anthropocentrism of Scottish Philosophy…The foundation of his ethic and his conception of natural theology, moreover, are Scottish rather than Calvinistic…Despite his reiterations of dogmatic formulae, the optimism of the Scottish Renaissance interposes itself and separates his theology from that of John Knox and John Calvin.”

The application of this thesis to the whole of Hodge’s theology is no doubt unfounded. But the influence upon the polemic and apologetic system of Hodge has been pointed out before. Ahlstrom’s claim is that this Scottish philosophy, which was in America “a vast subterranean influence a sort of water-table nourishing dogmatics in an age of increasing doubt,” accelerated the trend toward rational theology. Its adoption speeded the end of Calvinism he claims, while it brought Unitarianism to its “Augustan Age.”

It is worthy of note that Ahlstrom refers to R.J. Danhof’s thesis on Hodge and the “stains of humanism” in his thought. Especially in regard to Hodge’s apologetics Professor C. Van Til of Westminster has throughout the years painted out this inconsistency in the thinking of the notable Princeton theologian.