The title of this article, “What Is Home Without a Mother?,” is the caption of a picture which hung in my grandparent’s home when I was a child. The picture showed a mother and child, depicting tender, motherly love. As a child, I answered that question for myself many times. I loved my mother and grandmother, and when I would read the caption: “What Is Home Without a Mother?,” my answer to the question would always be: “An empty house!” 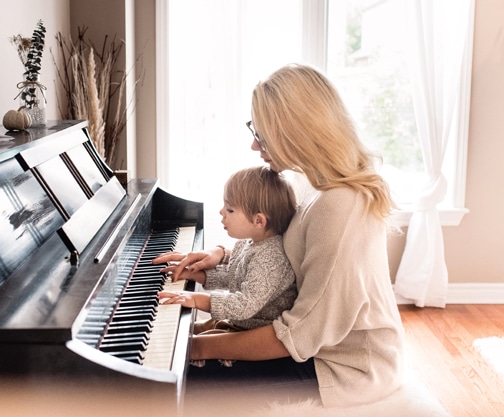 At the time I was a child, children may have had the  fear that their home could become an empty house through the death of their mother, but the fear of a child’s home becoming an empty house through divorce or a mother’s career or work outside the home was not even present for most children. God granted my prayer request as a child and spared the life of my mother so that I did not have to endure an empty house in my childhood. Many children today are experiencing loneliness in the feeling of an empty house, not due to death, as an act of God, but by an act of the mother, the father or both parents in choices for the mother to have a career or work outside the home and/or divorce.

Loneliness has become a definite reality for children in our present-day family life. Many families are smaller with a child possibly having no sibling of the same gender near in age and the mother being out of the home much through career, work outside the home, recreation, socializing and/or divorce. In the publication Nexux (February, 1993), a woman tells the story of how she became a lesbian and later found the Lord and was healed. I quote her paragraph describing her childhood in her story:

In my family there was Mom and Dad and my three brothers. I was the only girl and youngest in the family. Dad traveled and Mom was busy raising all the little kids. I was starving for female attention from my mom, but she was very busy. I was not sexually abused as a kid, raped or molested. My parents were not alcoholic and were married thirty-one years before my mom died. I like guys and always have. So my upbringing was somewhat normal by society standards. But my life lacked one thing thatI desired more than anything. I wanted and needed some sisterly, motherly, female companionship and love. At sixteen I set out to find it. Surely I would be satisfied in life then.

The above paragraph illustrates the important role of a mother in a child’s life. Children need the security, stability, interaction, companionship, the love and the consistent discipline and guidance of a mother in their lives. Many schedules both of parents and children are so hectic that even though most often children’s physical needs are being taken care of, children suffer emotionally from the tenseness of racing with time between the schedules of their parents and their own and being left again and again with babysitters, day care workers, siblings, father or alone, all of which can feel like a home without a mother—Mom’s not there. A frequent “empty house” feeling for a child can become an emotional problem for an adult.

Mothers who leave children today to follow what women will even claim as a calling, a need for self esteem, a need for more money or the desire for a career, often leave their children for others to instruct. care for and fill the child’s time. With the time taken out of the day or week for work, it often leaves the mother less patient, less willing with the hours left in the day or the week to have time and take time pleasantly and without frustration for her children, spouse and home. When Mom is home, if she has so many duties to perform, the child still may feel lonely and a burden. Continual extreme busyness easily gives to others a feeling of isolation and separation and brings on restlessness and uneasiness. A very busy person through body language–fast speech, fast movements, hurrying and scurrying and telling all of his/her “did’s and must do’s” gives the unspoken message: “Don’t take too much of my time. My time is too valuable for that!” I appreciate visiting the Amish people in Indiana for their priority of time for people rather than living in a dither in pursuit of things and activities. Perhaps we could learn from them in this important area.

“What Is Home Without a Mother?” It sounds lonesome and morbid, doesn’t it? Mothers, value your calling from God. The only possession God has given you on this earth that can go with you or follow you to heaven is your children. God has given you a work with eternal value.

In my autograph book which I had as a child my mother wrote the following verse (author unknown) to me:

“May those pearly gates of heaven

So far beyond the sea,

Open wide one day, my darling,

To welcome you and me.”

My mother has entered the joy of heaven. One day by God’s grace I will follow her there. She was a full-time mother for which I am thankful. She gave us loving quantity and quality time by giving of herself to be our caretaker, companion and teacher so that her children neither in childhood nor adolescence had to experience a “home without a mother.”

Jan Groenendyk attended Dort College and graduated from Calvin College. She received her MA from MSU and taught in five Christian schools for a total of twenty-seven years. She is married to Rev. Marion Groenendyk of the First Zeeland CRC where her husband is employed.