When I was a boy growing up in East Texas, we lived near some railroad tracks. In those days, homeless men (whom we called hoboes) often rode the rail cars from town to town. Occasionally, one of those men would show up at our front door and ask my mother for a meal. Without asking any questions, Mother would go to the kitchen and prepare a plate of food for him. She gave it freely, without requiring any “work for food” on his part.

Was my mother’s kindness an act of grace? It was certainly a gracious, benevolent act, but it hardly qualified as an act of grace in the Biblical sense. We often define grace as God’s unmerited favor and set grace in opposition to works, as in “We are saved by grace, not by works.” If we hold to the simple definition of unmerited favor, though, my mother’s gift of a plate of a food would qualify as grace. The hobo did nothing to earn it. The food was entirely unmerited on his part. So why do I say that mother’s kindness was not grace? 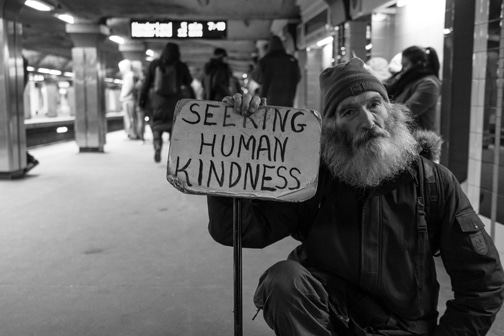 To answer that question, let me take the story of my mother and the hobo into the realm of fiction. One day a hobo shows up at our front door, again asking for food. This time, however, mother recognizes him as the man who had robbed our home some weeks before. Instead of going to the phone to call the police, she again goes to the kitchen and prepares a plate of food. She gives it to him with no questions asked and no work required.

Now there is not only the lack of merit, but more importantly, there is the presence of demerit. The hobo not only does not deserve the food, in the sense of having worked for it; he actually deserves to be apprehended and punished for his crime. Mother’s gift of a plate of food in these circumstances moves us toward the real meaning of divine grace.

God’s grace addresses itself not merely to the absence of merit but to the presence of demerit. To understand divine grace, we must see it as more than unmerited favor. The idea of demerit is an essential element in the Biblical meaning of grace. In our relationship with God, there is either merit for obedience or demerit for disobedience, but there is no such thing as “unmerit.”

In our case, of course, there is no merit. Even our best deeds are stained with sin, and in a strict view of justice, we deserve to be punished rather than rewarded. That is why the Apostle Paul wrote of us that in our condition before salvation, “We were by nature objects of wrath” (Ephesians 2:3). Since the concept of demerit is essential to an understanding of grace, I propose the following definition: Grace is God’s favor through Christ to people who deserve His wrath. In this definition, the deserving of wrath picks up the idea of demerit, while the concept of God’s favor is still retained.

GETTING CLOSER TO GRACE

Now let’s go back to the fictitious story of the hobo who robbed our house but still received a free meal. I indicated that this scenario moved toward the meaning of grace. However, it still falls woefully short of illustrating God’s grace to us. Let me give you several reasons why.

First, although my mother would have been personally violated by the hobo’s robbery, it would not have been her law that was broken. If he were apprehended and brought to trial, the case would have been called, “The State of Texas vs. Joe Hobo,” not “Mrs. Bridges vs. Joe Hobo.” Although my mother had been wronged, it is the state’s law that has been broken. At the same time, however, we cannot say that the state has been wronged.

With God, however, His person and His law come together. It is His law that we break. Even though our sin may adversely affect someone else, it is still an affront to God personally as well as a vio~ lation of His law. When God sent the prophetNathan to confront David about his adultery with Bathsheba and the murder of Uriah, Nathan said, “Why did you despise the word of the Lord by doing what is evil in His eyes?” and “The sword will never depart from your house because you despised Me” (2 Samuel 12:9–10). David in his sin despised both God’s law and His person. In our fictitious story of the hobo robber, we can say that he despised the law of the State of Texas and he despised my mother. But he didn’t rob the state, and he didn’t break my mother’s law. David violated Bathsheba and had her husband Uriah murdered, but in so doing, he despised both God’s law and God’s person. Sin is more than breaking God’s law. It is aggravated assault upon the infinite dignity of His person. Because of this, we deserve His wrath, but instead we receive His favor. That is grace.

The second reason our story does not fully illustrate grace is that my mother had neither the power nor authority to execute justice. All she could do was call the police and hope the man would be apprehended, convicted, and sent to prison. She might be called upon to testify at his trial, but she could not execute justice. But God can. God has both the authority and power to punish sin. Jesus said, “Be afraid of the one who can destroy both soul and body in hell” (Matthew 10:28). God could have consigned all of us to hell. as He did the angels who sinned (2 Peter 2:4). But He gives us eternal life instead. That’s grace.

Now let’s introduce another factor into the story. Suppose my mother had recognized the man not only as the one who had robbed our home but as one who was suspected of robbing other neighborhood homes as well. Now she would have a civic duty to call the police. Suppose she would have said to herself, “But I feel sorry for him. He probably has a wife and children back home. I’ll just quietly give him the food and send him on his way.” If Mother had acted that way, she would have essentially subverted justice in the interest of mercy.

God, however, cannot exercise me,rcy at the expense of His justice, which must be satisfied. He cannot choose simply to overlook sin because He feels sorry for us. If God pardoned our sins in that manner that would not be grace but miscarriage of justice.

There is still one more important difference between the hobo and ourselves. In the story, the hobo was knocking at my mother’s door asking for food. In our relationship with God, we were not knocking at HIS door seeking salvation. As the Scripture says, “There is no one who seeks God” (Romans 3:11). Instead of seeking God, we were trying to avoid Him. Today some speak of those without Christ as “seekers.” The truth is, though, that whenever an unbeliever is seeking God, it is because God has first sought him. We were dead in our sins (Ephesians 2:1). We cannot seek God until He first gives us life. God seeks us when we cannot and do not seek Him. That is grace.

THROUGH CHRIST WE ARE SAVED

Now let’s return to my proposed definition of grace: God’s favor through Christ to people who deserve HIS wrath. By His grace, we do not receive the wrath we deserve. Instead we receive the favor we don’t deserve. Why is this true? The answer is found in the two words: through Christ. It is because of Christ’s death in our place that we do not experience the wrath of God which we so richly deserve. Jesus satisfied God’s justice and turned away God’s wrath from us by bearing it Himself on our behalf. Now God can extend mercy to us without subverting His justice.

Jesus did more, however, than satisfy God’s justice and turn aside His wrath. By His perfect obedience, He earned for us all of God’s favor, all of His blessings. To use the hobo illustration, He mowed the grass trimmed the hedges, washed the windows and painted the porch. He did it all. Just as He died in our place, so He also obeyed in our place. That is why those two words “through Christ” are so critical to the definition of grace. Without Christ’s work for us, there could be no grace.

We also need to realize that God’s favor to us through Christ is bountiful. It is much, much more than the hobo’s plate of food. God receives us into His family as His sons and daughters and opens up the storehouse of His boundless riches to us. He has blessed us with every spiritual blessing in Christ and promised to meet all our needs according to His riches in Christ Jesus (Ephesians 1:3; Philippians 4:19). He invites us to come with confidence to His Throne of Grace to receive mercy and find grace to help in our time of need (Hebrews 4:16).

How should we react to this definition of God’s grace? We should respond, first of all, with a deep sense of humility. We really do deserve God’s wrath. The awareness of that fact should not only humble us before God but also before one another. In the realm of grace, the horrible sin of self-righteous comparison of ourselves with other people has no place. Even with respect to the most flagrant sinners around us, we ought to say in all humility and absolute truthfulness. “There but for the grace of God I go.”

Then we should respond in profound gratitude. Not only have we been spared God’s wrath, but we have also been given all His favor. Everything we are and everything we do that is of any value we owe to the grace of God. It is gratitude arising spontaneously from a heart filled with grace that motivates us to obey God and serve Him wholeheartedly. We’re not just undeserving, we’re ill deserving. We deserve wrath, but because of Christ, we receive God’s bountiful blessing. Only when we understand that, do we understand grace.

Jerry Bridges has served on the staff of the Navigators since 1955. He was elected Vice President for Corporate Affairs in 1979, but in 1994 he resigned that position to devote all of his time to a Bible-teaching ministry. A popular speaker, he is also the author of several bestsellers, including The Pursuit of Holiness and The Practice of Godliness. His most recent work is The Joy of Fearing God. He and his wife, Jane, live in Colorado Springs, Colorado.

This article appeared in the journal of the Reformed Theological Seminary (RTS) in Jackson, MS.