Korea has been a great influx of missionaries of late. Since the out· break of war in Korea in June 1950, and during the years of fighting and subsequent tenuous cease fire they have come. Of the 350 Protestant missionaries in Korea in 1955 at least 170 have come for the first time since 1950. Of the 25 Protestant groups in Korea now, 10 are newcomers, arrived since 1950.

The United Nations and the American government also show confidence in the future. With armed forces largely evacuated they arc spending huge sums on non-military economic reconstruction. Not only so, but probably hundreds of millions of dollars have gone into building and equipping institutions not directly concerned with the economic rebuilding of this nation—churches, religious schools, orphanages, hospitals, and homes for crippled veterans.

Nor has the missionary influx reached its peak. We hear that the Methodist Church (American) now plans to double its number of missionaries in Korea in the next four years! Working under the direction of and in cooperation with native Methodist bishops in a denomination of perhaps 600 churches, an already very large group of 80 Methodist missionaries now plans to borrow to 160! Other missions continue to grow rapidly. The Evangelical Alliance Mission, for example, first arriving in 1953, now numbers 19 men and women in Korea. 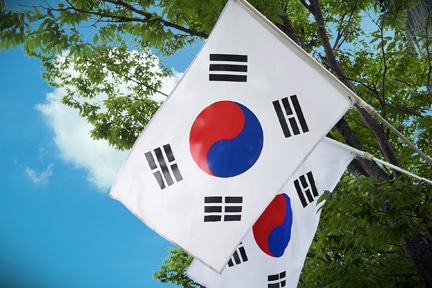 Within the Korean churches the tasks to do far outnumber the doers. The Korean people from year to year listen more willingly to the voice of Christianity. The young church of a scant 70 years speaks with new confidence and vigor to the masses. Churches spring up everywhere. Today, while Japan reports one Christian to each 180 of its population, Korea announces one in 18.

But, with thousands of Christian leaders killed by Communists, or in the war, few churches have enough trained, mature leaders. Schooling was suspended or denied to many of the younger generation during the recent war years. There are no “free” public schools here, and post-war poverty has prevented many from receiving schooling since the war. Huge drafts of young men (this little nation has the world’s fourth largest standing army) have further drained off potential preachers and crippled the efforts to fill empty pulpits. Our movement here, the General Presbytery Presbyterian Church, though several times the size of the Orthodox Presbyterian Church in America, for example, has little over half the latter’s number of ministers. Its 550 churches have little over 100 ruling elders. The growing flock has far too few shepherds here, and every missionary win have large opportunities for helping the church through various kinds of ministry.

Looking to the West

The Korean church is past her infancy and has grown up to feel herself a participating part of the world-wide Church. Her leaders and her bright students fly and sail to and from the West in surprising numbers. These men attend councils and conferences and schools of various kinds, and draw eagerly from the storehouse of literature and experience of the churches of the Western nations. Naturally the Korean church looks to the mother churches for wisdom in problems of discipline, organization and Christian education. Pastors, teachers and students here assiduously buy and read much of the latest and best Christian writing in English, Japanese, and even German and Dutch, when obtainable. They spend what are to them huge sums and exert great efforts to master a foreign language in order to read them.

But the churches of the West, to which the Korean church looked for assistance, have in large measure betrayed that trust. For the Korean visiting in the West, many pitfalls, even ambush waited to trap him. Schools sponsored by church bodies were seen permeated not with the Spirit of God, but with the spirit of secularism, non-Christian philosophies, and, where Christianity seemed retained, not the old recognizable truths, but modernism. Churches of old and glorious stand now stood op· posed to truth. Though officially holding the old creeds of orthodoxy, these churches bristled with a new leadership committed to a new religion not truly even related to the old. With good intention or not, with skepticism toward biblical supernaturalism, a position often concealed behind a deceitful use of terminology, and with a frequent deluded sophistication in being educated moderns, a flood of liberals in America have taken the prophet’s cloak to themselves. And who has stayed their hands?

Nor does the Korean who never leaves his native land escape similar problems in the schools and churches of Korea. A professor of Seoul National University is quoted as recently stating that all the old missionary-founded schools of higher learning, i.e. the colleges and universities, have failed in their original purpose and stand. Once vigorously committed to Christianity they now are largely secular or modernistic. The spirit of the West has permeated here, as elsewhere.

In the Presbyterian work in Korea there are at present, on one side, missionaries of the United Church of Canada who have sided with a group which recently left the Korean Presbyterian Church to form an openly liberal church. The Methodist Church has long stood largely in a position of avowed liberalism. With the large continuing Presbyterian Church are many missionaries of the Presbyterian Church in the U.S.A., the Presbyterian Church in the U.S. and the Australian Presbyterian Church,working hand in hand. Though most of these missionaries are individually committed to orthodoxy, they raise little resistance to the steady pressure and control of modernistic leadership in the home constituency. There is for many of them, I believe,a personal distress and concern about these facts, but their position is extremely difficult. But no matter how orthodox: their personal convictions may be, their official representation and membership in denominations full of undisciplined modernists, not to mention denominations positively led by modernists, weakens their personal testimony and increases the confusion in the Korean church. World Council overtures and ecumenical propaganda came into Korea virtually in the footsteps of the missionaries. Their compromising, indecisive stand actually helped pave the road for a steady influx of visitors, literature, etc. inimical to the maintenance of true faith and action in the Korean church. Korea is but one of many countries where this general picture repeats itself.

In Korea I have heard the Presbyterian U.S.A. controlled radio station broadcast transcriptions of radio plays which to me definitely converted the Bible stories into stories setting forth salvation by self-character-analysis and reform. In Seoul resident missionaries are members of the Seoul Union Church and placid listeners to various visiting liberal leaders from America who speak in its services. Presbyterians are among the members and leaders in this interdenominational church which is apparently an offering to the demands of ecumenicalism. A Gordon Gilkie, a John Mackay, an Emil Brunner and others are welcomed to Korea, given wide audience in the Korean church, and applauded, while the Korean churches look on in bewilderment. The Christian Literature Society, printing much of the Presbyterian literature here, as well as Methodist literature, prints heresy. I have at my desk the Society’s edition (in Korean) of Reinhold Niebuhr’s Beyond Tragedy. Its back page advertises a title by E. F. Scott. In its large downtown office I saw displayed last fall by the Korean Christians in charge two separate volumes unmistakably teaching Swedenborgianism. Even after a protest from one of the Presbyterian missionaries against the Society’s organizational table it was still displayed—as a favor to another publisher, said the man in charge to me. This display is not a book store stock display but an office display of approved, recommended literature for examination by visitors.

To the right ranges a startling array of a different sort -a widely assorted group of fundamentalist missions, newly arrived in Korea. Of the ten new groups arriving since 1950 (mostly since 1953) the denominational groups represented are the Christian Church, the Mennonite Church, Church of the Nazarene, a Pentecostal church, and the Southern Baptist Church. Non-denominational groups are The Evangelical Alliance Mission and World Vision (Bob Pierce is leader). Earlier arrivals are the Oriental Missionary Society (Methodist in doctrine), coming in 1905, which has built a denomination here, and the Assemblies of God (1947). Perhaps all these are committed to the broader framework of Christian doctrine, generally speaking, but many of them manifest various types and degrees of Arminianism, Pietism, Perfectionism and Dispensationalism, with decided Baptistic, Independent types of church structure and government. If they build new churches in Korea a wide multiplication of small new denominations and independent bodies of like convictions will spring up. None of these groups, to my knowledge, has seen fit to select an already existing conservative church in Korea and align its forces with it. On the other hand, except for the interest of a minority in the N.A.E., few have done anything officially to oppose the sad status quo with regard to a threatening modernism. Surely among these groups the Korean church has no solution for its internal problems.

There is, however, one church of real promise, wherein we may well hope for a continuation of a Reformed witness. It is the above mentioned General Presbytery Presbyterian Church, separated in 1953 from the compromising continuing Presbyterian Church. Now composed of 550 churches, mostly small, new groups, and scattered all over South Korea, she has stood strong for the faith once for all committed to the saints, seeking sturdy teaching and careful shepherding and diScipline in the church. With this church stand but a small group of missionaries. They are two families and one lady of the Independent Board of Presbyterian Foreign Missions, and two families of the Orthodox Presbyterian Church. These two mission groups, alone, from among many others, left with this Korean church when she was forced to separate from the larger Presbyterian body because of its modernism and its unconstitutional maneuvers in avoiding discipline of erring members. These nine are the only missionaries with this new and struggling group, while the Methodist Church, not much larger, hopes for a doubling of its 80 missionary helpers in the next four years! We need more missionaries at once to help stem the growing tendency of Christians here to slide down either the watershed of liberalism or the opposite watershed of fundamentalism and independency, and to stand with this church to maintain a true Reformed witness in Korea. That testimony must be solid Calvinism with its perennial validity and relevance, which it has by virtue of being the message of the Scripture. It is the only cure for decay, the only rescue from ruin, the only real enemy of error, the only salvation from sin -the gospel which glorifies the God who gave it.

An Appeal to the Christian Reformed Church