“Yet there shall be a space between you and it, about two thousand cubits by measure. Do not come near it, that you may know the way by which you must go, for you have not passed this way before.” (Joshua 3:4 NKJV)

As we begin a new year, we always do two things. We look back over the past year and we look forward to the year that lies ahead of us. When we look back over the previous year, we are familiar with it. We remember the events. We recall the twists and the turns that were involved in the shaping of our lives. No doubt, some things were good. But I am sure there were some trying periods in our lives last year as well.

In my own life, as I recall the year 2002, one event scars those months deeply. In March of 2002, by way of an accidental drowning, the Lord called home my twenty-one monthold nephew. It was devastating then, and, to a certain extent, it stillis. We joyfully wished one another a “Happy New Year” in January. Those cheers now seem so hollow and ironic. We did not know how our lives would be changed in the month of March. When we first began 2002, we had no idea that such a difficult event was only weeks away.

But by faith, we press on. We continue to confess that all of our lives and times are in God’s hands and we trust the way of the Lord. And now, the year 2003 is upon us. As we look to the months ahead in the coming year, we realize that the pathway that lies before us is completely unknown to us. As familiar as we are with the past events of 2002, we are completely unfamiliar with the coming events of 2003. These weeks and months are uncharted waters. We have not gone this way before. It is not strange for us, therefore, to have some feelings of uncertainty and apprehension. 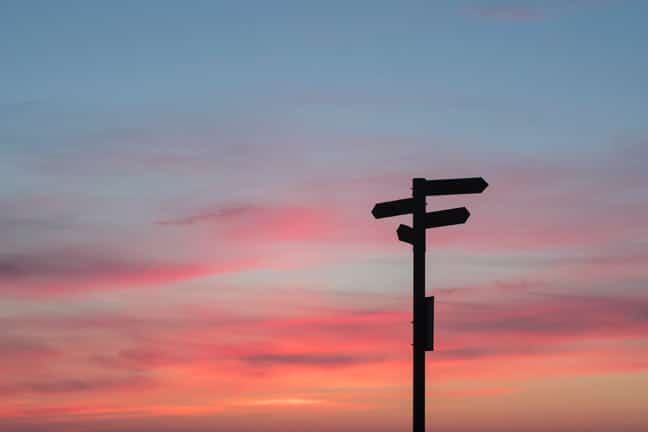 For this reason, we turn to the first six verses of Joshua 3 as the Scripture basis for this meditation. In Joshua 3, the children of the Lord, the Israelites, found themselves in a similar situation. It was time for them to travel. They had to move forward. The Lord had safely brought His people up out of the land of Egypt. They had completed their 40 years of wandering in the desert. Now, under the leadership of Joshua, the people were preparing to take possession of the promised land.

The spies had returned from Jericho, reporting that the people of Canaan were fainting for fear because of the Israelites. Now it was time to move. The time had finally come for the Lord’s people to cross the Jordan river and enter into the promised land. This is the situation at this point in Joshua 3. The Lord’s people are preparing to take their first steps along a new pathway; a way that they had not gone before. Perhaps they too, had some feelings of uncertainty and uneasiness about what lie ahead of them.

That is why the Lord, in His mercy, tells the Israelites that He will go first! The Lord would go ahead of them and then they were to follow. The Lord is a Shepherd who graciously leads His sheep. It is very interesting to note that the people were not to follow too closely! The priests were to lead the Israelites by carrying the ark of the covenant which represented the presence of God among His people.

I think it will help us look ahead to 2003 properly if we picture this scene of the Israelites drawing near to the Jordan. The priests carried the ark of the Lord some 1,000 yards ahead of the people as they walked toward the Jordan river. As soon as the priests touched the river, the Lord Himself opened the way for His people to cross over safely into the promised land.

These verses serve to comfort us today as we begin to cross a new year. Although we must confess that we do not know what the coming months will hold for us, it comforts us to know that the Lord knows the way. There may be only wonderful days waiting for us, but there also may be difficult days ahead. Sometimes we want to push a wheelbarrow of “what-ifs” ahead of us into the new year. We are concerned about “what if illness comes” or “what if war breaks out” or “what if some tragedy happens”.

That is why Joshua 3:4 is a source of comfort for us. How comforting to know that we are not without a Leader. We have a Captain and a Guide who not only knows the way, but in fact goes ahead of us, having ordained all of our steps.

The Israelites could not envision every event which would take place in the conquest of the promised land. However, at this point, they could see the next 1,000 yards. And that was all they needed. The Lord was going ahead of His people. For us, too, we cannot envision every event of our lives in advance. But as we go with our God, we can handle the next 1,000 yards. We can live one day at a time.

It is true that we cannot be sure what 2003 will have in store for us. But that’s okay. There are lots of things we do not know. However, at the same time, there are many things that we do know. We know that the Lord knows all things. Acts 15:18 says, “Known to God from eternity are all His works.”

If hardship awaits us, we can be encouraged by Job’s faithful confession in Job 23:10: “But He knows the way that I take; when He has tested me, I shall come forth as gold.” As we have now begun to travel the pathway of 2003, we should recognize that we have not passed this way before. This pathway is new to us. But also, at the beginning of this new year, we should realize that God knows the way. He goes before us. He knows every event that will unfold in our lives and He promises that His grace will be sufficient for us.

Because of our God, we can look ahead to 2003 with confidence as we follow the Lord unswervingly. When we follow humbly and faithfully, then we can be assured that it will indeed be a happy new year!