God’s Word defines a number of ways in which we are united as believers. The foundational unity of the people of God is the fact that we are united to Christ. John chapter 15 gives us a beautiful illustration of this unity as it describes the believer as the branches and Jesus Christ as the vine: “I am the vine; you are the branches.” The New Testament also describes this unity in its use of the phrase “in Christ” (found in the NIV in 89 verses). One of the great truths derived from these and other verses in Scripture is our belief in the spiritual unity of all believers. We are one in Christ not because of anything we have done but because of God’s great work. Historically, we have sometimes called this unity of believers the invisible church or the holy catholic church. This is the foundational unity for all other dimensions of the unity of believers. The true church cannot exist without union with Christ. This is our foundational unity as the people of God, the church of Jesus Christ.

The Scriptures also clearly teach that the invisible church is a visible witness in our world. God’s invisible work of uniting us to Christ results in the visible unity of the true church of Jesus Christ. This visible unity can be expressed in three ways: unity of belief, unity of obedience and unity of submission.

God’s Word is clear that unity of belief is what God expects of His people. The belief that we hold to is the teaching of God’s Word found in the Old Testament and the New Testament. Ephesians 2:19–20 state: “Consequently, you are no longer foreigners and aliens, but fellow citizens with God’s people and members of God’s household, built on the foundation of the apostles and prophets, with Christ Jesus himself as the chief cornerstone.” Jesus prayed that we may believe the same thing: “Sanctify them by the truth; your Word is truth” (John 17:17). Presbyterian and Reformed churches have focused on this unity as they sought to express in their creeds and confessions great Biblical truths that unite us. In the Reformed tradition we speak of the three forms of unity: the Heidelberg Catechism, the Belgic Confession and the Canons of Dort. We do not believe these documents exhaust our unity of belief but we praise God that the church is united by the doctrines taught in these confessions. Anyone who signs the forms of subscription in the CRC is committed to teach and defend these doctrines.

The unity of obedience is the churches’ conformity to the truth they teach with words. It is not enough to teach truth; the church must practice it. James reminds us of the importance of the actual practice of truth when he declares, “As the body without the spirit is dead, so faith without deeds is dead” (James 2:26). The church that declares the truth but fails to practice the truth is dead. The church of Jesus Christ is united by a unity of obedience. With joy the church says, “Amen, so let it be” when we hear the words of Jesus say, “Therefore go and make disciples of all nations, baptizing them in the name of the Father and of the Son and of the Holy Spirit, and teaching them to obey everything I have commanded you. And surely I am with you always, to the very end of the age” (Matt. 28:19, 20). The church of Jesus Christ is united in its practice as we are obedient to the clear commands of our Lord in our individual lives, our homes and our churches. 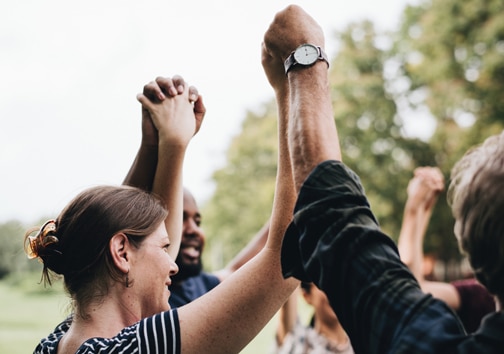 The church of Jesus Christ also has a unity expressed in its willingness to be submissive one to another. This happens in many ways. In the Christian Reformed Church this takes place with many traditional practices that are beneficial to good order and planning. Examples of our unity of submission can be found many places in the Church Order of the CRC. There is no clear command of Scripture that dictates the “calling practices” of the CRC but we submit to one another for the sake of good order and unity. Our unity of submission is also demonstrated when we agree to start and support a particular mission field. Once again we submit to one another by abiding by the decisions made by various individuals about who is going where in our mission activity. These examples and many more demonstrate the unity of the church as we, “Submit to one another out of reverence for Christ” ( Eph. 5:21).

Tragically, each one of these areas of unity has been violated by the Christian Reformed Church in the recent past. Numerous examples could be given. I will focus on only a few. First, our unity of belief has been broken by a study committee of synod itself. The overture from Classis Hudson pointed out that members of the study committee admitted that they do not believe what our confessions teach about children at the Lord’s table.

Second, this same instance illustrates a breakdown in our unity of submission. All those who signed the Form of Subscription promised not to publicly teach this unless they submit a confession difficulty or confessional revision gravamen. But members of this study committee used a synodical study report and the floor of synod as a means to change the confessions. If members of the CRC do not really believe the confessions in this area one might ask how many other teachings are not believed.

Third, it is clear that the CRC no longer has a unity of obedience to the Word of God. We are now practicing the ordination of women into authoritative office. For everyone that is convinced that the 1994 decision of synod was right, this current practice of the CRC should be a major problem.

If we focus on the current situation we will see that it arose because the CRC failed to hold to the unity of belief, obedience and submission concerning the women in office issue. The Scripture informs us that truth leads to proper action. If our goals in life are Biblically informed we strive to attain them through the process of sanctification.

Truth has priority over act. Truth informs us of how we must act. Without the revelation of an absolute truth we would not know how to act. Conservatives have been guilty of confusing Unity of belief, unity of obedience and unity of submission. We have been compromising for many years.

The reality is that the CRC has tolerated the false teachers promoting women in office. We accepted those who were not united with us in belief. Further, we confused their submission to the Church Order (unity of submission) with unity of obedience. We think that the church is in turmoil because we are now practicing the ordination of women into the ministry. But the real problem is that the church was not in turmoil over this false teaching. We incorrectly thought that unbiblical teaching and unbiblical teachers were tolerable. It is easy to move from tolerating false teaching to implementing false practice. The Christian Reformed Church took a compromising step long ago by accepting a unity of submission to the Biblical command that forbids women in office and at the same time accepting a disunity in belief. We divorced the historic unity of Reformed theology of Word (truth) and deed (obedience). The practice of tolerating false teachers is just as sinful and more significant than the practice of tolerating the implementation of the teaching of the false teachers.

The Biblical principle at stake here is this: False teachers must be disciplined. If they are not, their teaching will affect the church of Jesus Christ. The first domino to fall was the toleration and acceptance into the ranks of officebearers and members of those promoting the teaching of the ordination of women (disunity of belief); the second domino was to tolerate the practice of those local churches and classes that ordained women into the office of elder in violation of the Church Order (disunity of obedience to Scripture and submission to the Church Order) and the third step was to officially implement the false teaching regarding the ordination of women into the ruling offices and officially endorse disobeying God’s Word. The reason it is hard for churches to leave now is because they would have to repent for not leaving over the practice of tolerating the teaching of women in office.

We can apply this same pattern to the toleration of false teachers in the CRC who call on the church to allow homosexual marriages, address God as she, abort babies in the womb and other unbiblical practices that must not be tolerated. In talking to individuals who promote addressing God in feminine terms, I was told that they would submit to the decision of the CRC if they forbade the practice. (They currently do not believe the practice has been forbidden by the denomination or God’s Word.) Will the CRC tolerate those who argue for feminizing God as long as they do not practice doing it? Will the CRC tolerate those who recommend marrying homosexuals as long as they do not practice it? The Christian Reformed church is currently tolerating these differences of belief. We are making the same error we made with the issue of women in office. A number of people recently told me that the PCUSA is in the midst of a spiritual revival because liberals cannot muster enough votes to approve the ordination of practicing homosexuals. I believe they are a false church because they are unable to discipline those officebearers who vote in favor of such a motion. One might legitimately ask if, in the eRe, the only difference is the percentages involved. Are we really any better if we allow even one percent of our officebearers to teach that homosexuals marriages honor God or that we should address God as mother? If anyone remains an officebearer while teaching these falsehoods, the CRC will once again have failed to discipline the false teachers. Eventually we will tolerate the practice and the officially endorse the practice. The pattern can be seen in our disunity regarding women in office. We do not see unity in diversity in these matters, but rather disunity in unfaithfulness.

For those in the CRC who find the step of accepting the ordination of women in office tolerable, the reason may well be because you have not yet repented for the years that you accepted the false teachers. Repent of your first error. Then we will be able to deal with a faithful response to the disunity within the CRC My prayer is that a true unity of belief, obedience and submission may yet be demonstrated by many faithful local congregations still in the CRC, struggling to be faithful.

Rev. Freswick is the pastor of the Christian Reformed Church of Newton, New Jersey.