“AMERICAN Protestants go to church for ‘amusement’ and are less concerned about religious doctrine than parking facilities.” This is the opinion of Osservatore Della Domenica, Vatican city Sunday magazine as quoted by The Albertan, Calgary, Albertha daily (Feb. 6, 1956).

The American Protestant “leaves home for a religious service and goes into the first church that doesn’t smell Catholic,” the Vatican city paper declared. Other citations are equally vigorous: “Protestantism is more and more losing its religious character.” “The average Protestants are people who look on Sunday for a little amusement or prayer, who believe both in God and the uselessness of all doctrinal and ritual questions, who choose their churches on the basis of the personality of the pastor, the politeness of the usher, and the ease of parking the car.”

Protestantism is an easy target for such blanket charges, obviously. For the term Protestant is notoriously meaningless in today’s religious world. And it can also be said, I’m sure, that unconcern for doctrinal issues, arbitrariness in choosing or remaining with the church, and spiritual superficiality are also to be noticed among Romanists. In fact, serious-minded Protestants are often heard to say exactly such things about their Roman Catholic neighbors.

“So are you” is not a good defense against the charges leveled by the Vatican city publication, however. The only good answer to them is a church which fearlessly preaches the full counsel of God as revealed in his infallible Word, a devoted membership which seeks the true church earnestly and continuously, and which loves the truth of God, of which that pure church is indeed “the pillar and ground.” 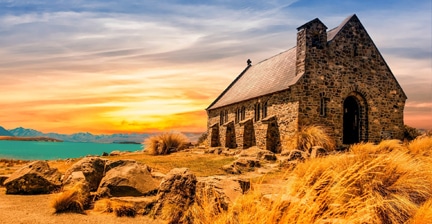 Dr. John A. Mackay, the Presbyterian Church, U.S.A., and Rome

The Converted Catholic magazine has attracted wide attention under the aggressive leadership of ex-priest Walter M. Montano. Its editorial policy is almost entirely oriented to the experiences of such men as Mr. Montano, which means that it is deliberately and fearlessly anti-Roman Catholic.

In its November, 1955 issue we find reproduced in fun the statement adopted by the 167th General Assembly (May, 1955) of the Presbyterian Church, U.S.A. (Northern), regarding recent Romanist doctrinal pronouncements—which means the declarations regarding the birth, assumption and work of the Virgin Mary. The Presbyterian statement in question was prepared for the “Permanent Commission” by one of that denomination’s most brilliant leaders, Dr. John Mackay, president of Princeton Theological Seminary. Under the title: “The Marian Cult in Relation to the Lordship of Christ and the Unity of the Church,” Dr. Mackey and his church say such things as:*

The festivals in honor of the Virgin Mary which marked the Marian Year of 1954 set in bold relief the status now accorded to the Mother of our Lord in the Roman communion. In the celebrations of that year the progressive trend to exalt the figure of the Virgin Mother to the office of associate partner in the work of redemption reached its culminating point. Mary of Nazareth has become Co-Redemptrix with her Son. The year 1954 offered the appropriate occasion in which to draw attention to the new redemptive role of the Virgin. Exactly a century before, her freedom from original sin was authoritatively defined in the dogma of the Immaculate Conception. In 1950, nearly a century later, Pope Pius XlI promulgated the dogma of the Assumption of the Virgin. According to this dogma, she who never knew the corruption of sin had been equally spared the corrupting power of death, and was translated, body and soul, to the glory of heaven, without her mortal flesh suffering the process of dissolution. The Marian Year, founded upon these revolutionary dogmas…prepared the way for the acclamation of the Virgin in our time with many varied titles “Queen of Heaven,” “Queen of the Universe,” “Queen of Peace,” have been added such popular designations as “Mary of America,” “Mother of the United States,” “Mother of the Atomic Age,” “Our Lady of Television.”

The Mackay report lists a number of “pertinent observations” with respect to Romanist Mariolatry, three of which (with summary statements taken from the argument beneath these heads) are:

A. Honors bestowed upon the Virgin Mary in the course of Christian history have closely paralleled, and in some instances duplicated, honors paid to Jesus Christ.

This process, which still continuos, has been equally true in liturgical practice and in theological concept. Episodes in the life of Christ, festivals held in honor of Christ, mysteries relating to the person and work of Christ, have all been duplicated by episodes, festivals and mysteries connected with the Virgin Mother…

Doctrinally speaking, the theology of the Virgin has passed through three distinct stages. In the first stage, the doctrine of Mary was an integral part of the theology of Christ. In the second stage, it was an appendix to the theology of Christ. In the third stage, the stage which has now been reached, Marian Theology forms a completely independent chapter of Christian theology. This, too, should be added. Mariolatry, that is the theology of Mary, is of a very organic kind and is still in the making When the question has been raised regarding the factual basis in Scripture or in history for the dogmas of the Immaculate Conception and the Bodily Assumption of Mary the answer given is this: God could have done what these dogmas affirm; it was fitting that He should do it; therefore He did it…Doth the status and the authority of the Virgin are therefore inseparably linked to the authority of the Roman Catholic Church. The Church claims that the Roman Pontiff is the duly constituted vice-regent of Jesus Christ, the infallible interpreter of the words and acts of God, and the exclusive arbiter as to what God may have said and done. Thus, in a subtle but decisive way, the Church ceases to be God’s servant and becomes His patron…

D. The development of the Marian Cult has widened the breach between the Roman Catholic Church and on other Christian communions.

In the figure of the Virgin the Church of Rome has created a semi-divine female being, who becomes virtual head of the Church, the hope of all who are distressed and the Sovereign overlord of all that occurs in history… (In this) today the Roman communion stands alone, in proud yet tragic isolation, from all other. Christian Churches. Non-Roman Christians on their part deny that the Church has any authority to create a theology which has no foundation in Holy Scripture….

E. The Marian Cult constitutes a challenge to all Evangelical Christians.

The glory of Christ’s leadership in His Church, His undying concern for the members of His Body and for all human beings, is both tarnished and challenged by the new status accorded to the Virgin… What is more serious still, the Holy Spirit recedes into the background and the Virgin becomes virtually the Paraclete, the Holy Ghost Incarnate. In view of this development which, let it be said with sorrow, is a major departure from the historic Christian faith, a challenge comes to all Evangelical Christians…

From these excerpts it is quite evident that Dr. Mackay and his commission made a thorough and competent study of this Roman Catholic error, and that they did well to direct the attention of their denomination and the world to its danger. Those of us who are sympathetic to the Orthodox Presbyterian Church can scarcely be expected to restrain the raising of an eyebrow when the Mackay commission speaks so eloquently of the authority of Scripture over against Romanist views of the authority of the Church, but this, we take it, is not the time for that aspect of the discussion.

The Presbyterian declaration indicates, however, that editor Montano is not as radical as one might first think when he includes in his editorial columns of this same issue of Converted Catholic this statement:

In the light of this accelerating program toward the cult of Mary, Protestantism can no longer remain silent about this falsification of the Gospel and the usurpation of Christ’s attributes by an unscriptural Mary … let no one forget that the Roman Church as a whole is no longer a part of the body of Christ.

Both Kerk en Zending (“Church and Missions”) and Uit en Voor de Pers (commentary on interesting and Significant items noted in today’s press), regular columns in the Christian Reformed Wachter written by the Reverends Cornelius Witt and William Haverkamp, respectively comment favorably on the recent re-arrangement of congregational organization on the part of the Gereformeerde Kerk in Utrecht, The Netherlands.

In general we can agree with the Wachter columnists as they view this development with approval. In fairness, however, is it so simply a matter of fact that smaller congregational units mean a better expression of Christ’s Church? Isn’t there an ever present tendency in areas where several Christian Reformed congregations exist separately although in close proximity to each other that a kind of independentistic, congregationalistic spirit will develop? And to be practical for a moment, is it not true that smaller units run considerably higher in cost per family than large ones? Also: isn’t the demand for smaller congregations often born out of the desire to realize by way of the Church certain social advantages, rather than to promote the cause of that which is truly Church?

This.is not to imply that I am ready to defend the collegialistic practice as it has developed in The Netherlands. My only point is that I think we ought to examine the entire situation in terms of larger perspectives than the superiority of “our” method over against others, and then strive to make improvement in terms of all that is legitimately included in the biblical concept of Church.