“Expert” pre-synodical opinion seemed to indicate that Van Halsema and Van Tuinen were most likely to receive the nod for this position. Mr. Van Halsema has compiled a commendable record as contributor and editor of De Wachter, and Mr. Van Tuinen was being backed by many as an outstanding candidate.

Synod’s own committee of pre-advice on publication matters moved the name of Mr. Vander Ploeg as an additional nominee. From the floor the Rev. Peter Holwerda of Lansing, Illinois, clerk of the 1955 synod, was also added to the nomination. Election results on the second ballot revealed that Vander Ploeg was synod’s first choice, with Van Halsema as alternate appointee.

It is our opinion that the Christian Reformed Church has made an excellent choice in its appointment of Mr. Vander Ploeg. There is reason to believe that the solid Reformed emphasis of Banner editorializing will continue undiminished, and that the leadership Christian Reformed people have expected its weekly periodical to supply will be able and reliable.

Where Does Dr. Billy Graham Stand?

No longer is it possible to ignore or minimize the power of Dr. Billy Graham. His recent evangelistic crusades in Great Britain (especially Scotland ) and on the European continent have met with astounding success. If by this means revived interest in the Gospel, the Word, and the church is being produced, we can only be glad.

As Graham mounts in popularity and influence, however, the question as to his actual position on matters of theological and doctrinal significance becomes more pressing. This is reflected in the Rev. W. J. Grier’s magazine, The Irish Evangelical, for June 1955, page 3. Under the column head “News and Comments,” Grier compares that which a modernist is saying about Dr. Graham, with that which Dr. Graham is not saying about the modernists.

Principal Davey declared that the association of much evangelism with fundamentalist views was to be deplored. He described Dr. Billy Graham’s message as  “a rather old-fashioned form of the Protestant faith,” and Dr. Graham himself he described as “pleasant, humble and quiet, a man of God, with rather hypnotic eyes.” It is no great compliment to be classed by Dr. Davey as a “man of God.” In a public lecture at the College years ago he described four of the most outright antagonists of the Christian faith as ‘men of God’ and certainly converted.” The four men were ToIstoi, Middleton Murry, H. G. Wells and Bernard Shaw. All four of them repudiated the doctrine of the atonement; one of the four denied all the miracles, the resurrection of Christ and every other; and one of them does not hesitate to make Jesus out to be a sinner. When Dr. Davey speaks of Dr. Graham’s message as a rather oId-fashioned form of the Protestant faith, it is probably Dr. Graham’s emphasis on the authority of the Bible which he dislikes, for Dr. Graham does repeatedly quote the Bible as the final authority.

But what is Graham’s testimony over against modernists? Grier deplores the fact that Dr. Graham is “absolutely silent” at this point. He goes on to comment:

True, he may speak in general terms; but he seems to be careful not to be specific. If that were all, we would feel like passing the matter by. But it is not all. A close friend of ours who was in the choir in the recent Glasgow campaign informs us that near the close of the campaign Dr. Graham had Dr. Leslie Weatherhead on his platform taking part in the meeting. Dr. Weatherhead is one of the most pronounced modernists in Britain. We have heard from another friend, who stayed in the same hotel with Dr. Graham and members of his party, of the scant respect paid to the Lord’s Day by members of the party who bought and read the Sunday newspapers. Now, we believe that there is greater laxity among Christians in the U.S.A. than there is here on this point. We do not like this loose attitude, but we confess that we are more grieved by the compromise with the modernists than by the nonobservance of the fourth commandment.

It is our opinion that vagueness is a key policy in the type of modem evangelism Graham is so effectively promoting. This can be corroborated by quotations from his book, Peace With God, in which he deals with the relationship of “The Christian and the Church” (chapter 15 ). Here are a few typical Graham utterances:

The New Testament teaches that while there is actually only one church there can be any number of local churches formed into various denominations and societies or councils. These local churches and denominational groups may be divided along national and theological lines, or according to the temperament of their members…(p. 175).

The church has been widely criticized for many intramural squabbles, much hair-splitting and apparent lack of unity. These, however, are superficial things; these are the conflicts that come from slightly varying interpretations of the general’s orders and in no way reflect upon the wisdom of the general or his absolute authority in issuing his orders! (pp. 175, 176) 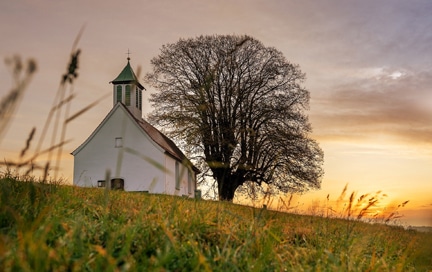 Study the underlying beliefs of the various denominations and you will find that basically and historically they are almost identical… (p. 176)

Some people find it easier to draw closet to God in magnificent buildings and with some form of ritual. Others find they can seek God only in stark simplicity. Some people find themselves in sympathy with one kind of service, others feel more at home in a different atmosphere. The important thing is not how we do it, but the sincerity and depth of purpose with which we do it, and we should each find and join the church in which as individuals we can best accomplish this. (p. 177)

Statements such as these reveal an attitude which will scarcely cause brother Graham much difficulty with any particular ecclesiastical communion anywhere.

No Room in the Church of Amsterdam

“M. W.” (the Rev. M. Wilschut ) in Amsterdoms Kerkblad for April 23, 1955, defends the action of the Amsterdam Gereformeerde Kerk consistory in their refusal to give or to rent the use of space in one of their church buildings to N.Y.V., Dutch “neutral” labor organization.

The strict necessity of Christian organization is considered by many American Reformed Christians to be an unwarranted position. Just a few weeks ago we heard at the annual Christian Reformed Ministers’ Conference in Grand Rapids a strong plea by a Christian attorney for a Christian witness on the part of Christian laboring men within the structure of the larger American trade unions. It appeared to us that this position went largely unchallenged by the greater majority of clergymen and leaders present at that meeting.

It might be interesting, therefore, to note Wilschut’s reasons for defending his consistory in its action cited above. Here are excerpts from his statement:

Some are apparently amazed that there are Christians in Amsterdam who by virtue of the biblical insight of their faith oppose the principle of neutrality in social action as represented by N.V.V….We believe and confess that the exalted Lord Jesus Christ is King of all of life…It is quite possible that on this or that practical point we might be agreed with a certain idea propounded by N.V.V. But with that we add that principally we stand all along the line over against this social organization. Because we do not know what neutrality is. Or, better expressed, because we know that neutrality does not exist. We know nothing of the rights of man, of the citizen, of the laborer apart from the right of our heavenly Father. We also strive in society for righteousness, but there too our struggle is for nothing else than the righteousness of the Kingdom of Heaven…We oppose the ideas and principles of them…who do not consciously strive in faith to subject themselves in all things to the Lord Jesus Christ…(translation ours, J. H. P.) This language is unmistakably plain…and challenging!