Worship is the response of man to the initiative of God in grace. We see this in the life of Abraham. The Lord sovereignly bestowed a word of grace, a promise of the heavenly country through the shadow and type of the land of Palestine (Hebrews 11:16). “To your descendants I will give this land,” was the word of gift and bestowal (Genesis 12:7). The response of Abraham to this message of incomparable favor was one of worship: “So he built an altar there to the LORD who had appeared to him” (Genesis 12:7). The construction of an altar entails the worship of God, even calling upon the name of the LORD (Genesis 13:4).

It cannot be disputed that worship is central in the Christian life, yet worship is so often a subject of numerous disputes. This is true today, but it was also the case in the ancient world. The woman of Samaria referred to a long-standing disagreement between the Samaritans and the Jews. Speaking to Jesus, she declared, “Our fathers worshiped in this mountain, and you people say that in Jerusalem is the place where men ought to worship” (John 4:20). In this statement, she drew attention to the debate between the Samaritans who promoted worship on Mount Gerizim and the Jews who advocated Jerusalem as the proper place of the public adoration of God. 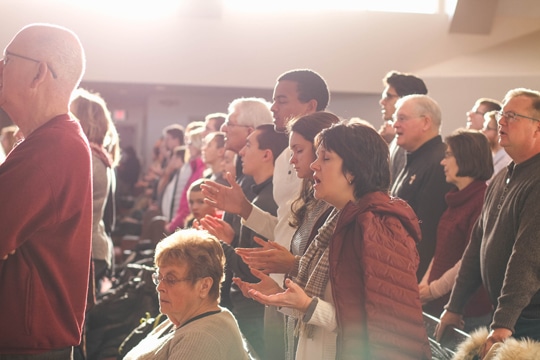 The debate, however, was coming to an end with the advent of the Messiah. Jesus was bringing change. Worship would no longer be tied to a geographic location: “An hour is coming when neither in this mountain nor in Jerusalem will you worship the Father” (John 4:21). Jerusalem was central in the old covenant, but the new covenant meant that “from the rising of the sun even to its setting” the “name” of the LORD would be “great among the nations” and that “in every place incense” would be “offered” to the name of God (Malachi 1:11). Furthermore, what God really wanted was a certain kind of worship: “The true worshipers will worship the Father in spirit and truth” (John 4:23).

The Father seeks people who will worship Him in spirit (John 4:23). The great complaint of the Lord in the Old Testament was not that his people were secular and irreligious. The Kingdom of Judah, for example, was careful and meticulous with respect to the outward forms of worship under the Mosaic covenant. The problem was that while their bodies were engaged in the rituals of the divine worship, the inward spirit was somewhere else: “This people draw near with their words and honor me with their lip service, but they remove their hearts far from me” (Isaiah 29:13).

We, in the new covenant period are not immune from the possibility of such hypocrisy. There is no question that the church in Ephesus was eminently orthodox (Revelation 2:2). The issue that the Lord raised against them related to the weakening of the devotion of their hearts: “I have this against you, that you have left your first love” (Revelation 2:4). The one thing that God must have is the heart. Our devotion and worship must come from the inner man, the spirit. Christ therefore admonishes, “Remember from where you have fallen, and repent” (Revelation 2:5).

We must worship God in spirit (John 4:24). But there is more. “The true worshipers will worship the Father in spirit and truth” (John 4:23). This was the problem with the worship of the Samaritans in contrast to that of the Jews. Jesus gave the woman of Samaria his own assessment: “You worship what you do not know; we worship what we know, for salvation is from the Jews” (John 4:22). The religious devotion of the Samaritans was directed to what they did not know. Although they bordered the Jewish heartland with the temple in Jerusalem, they might as well have lived across the Mediterranean Sea in Athens. It was Paul who later had to tell the Athenians that they worshiped what they did not know evidenced by their altar with the inscription “To an unknown God” (Acts 17:23).

The Jews in contrast had knowledge upon which worship could be based. Their knowledge was due to a very specific reason: “We worship what we know, for salvation is from the Jews” (John 4:22). The true worship which arose unto God from within Israel was a response to what God had given to Israel, namely the saving knowledge of God. As Paul spelled it out, the “Israelites” were the ones, “to whom belongs the adoption as sons, and the glory and the covenants and the giving of the Law and the temple service and the promises, whose are the fathers, and from whom is the Christ according to the flesh” (Romans 9:3–4). Such blessings of sovereign grace elicited the response of worship in the hearts of God’s elect within the nation of Israel (Romans 11:5).

True worship is our response to the word of truth, the good news about Jesus, that he is indeed the Messiah (John 4:25–26). Worship that is pleasing to God flows from our believing appropriation of the Christ in which we confess with the Samaritans of old that “we know that this One is indeed the Savior of the world” (John 4:42).