O Lord, our Lord, how majestic is your name in all the earth!

You have set your glory above the heavens.

From the lips of children and infants you have ordained praise

Because of your enemies, to silence the foe and the avenger.

When I consider your heavens, the work of your fingers,

The moon and the stars which you have set in place,

You made him a little lower than the heavenly beings,

And crowned him with glory and honor.

You made him ruler over the works of your hands;

You put everything under his feet:

All flocks and herds, and the beasts of the field,

The birds of the air, and the fish of the sea,

All that swim the paths of the seas.

O Lord, our Lord, how majestic is your name in all the earth!

The whole image of “royalty” has become tarnished and diminished in today’s world. Modern princes and princesses have rebelled against their royal parents, throwing out the “glue” of traditional values which has held dynasties together for centuries, at least formally. The political climates around the world have produced democratic mindsets that have replaced royal families with prime ministers and presidents who are elected by the people and must be sensitive to the people. In Great Britain the “royal family” has become a mere figurehead, and “not so royal” at that. The real authority and direction-setting resides in the prime minister and the Parliament. In the United States it resides in the president (“not so royal” at that) and the Congress.

But in God’s Old Testament theocracy, the king was the ruler, coached and chastised by God’s prophets, and directly accountable to God Himself. This ruler was to oversee the spiritual lives of God’s people, calling them to repentance and amendment of life. He was also to direct their political and economic affairs so that maximum productivity for the kingdom of God was achieved.

It is in this sense that the psalmist, in Psalm 8, praises God for conferring on man the high office of ruler over all creation (vs. 6). But man does not come to the exercise of that rule without preparation. “From the lips of children and infants you have ordained praise,” says the psalmist. Little children are tomorrow’s kings and queens. 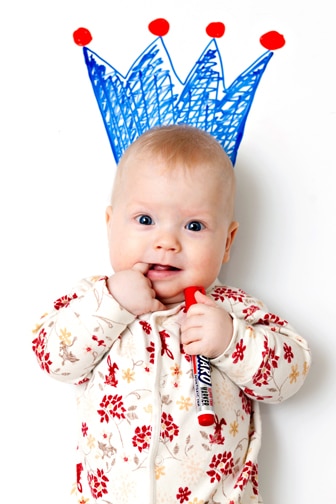 In our roles as parents, educators, pastors, catechism and Sunday School teachers, and youth leaders, it is crucial that we see these children as we ought to see them. Emerging generations in our postmodern times are being dubbed as Boomers, Busters, Millennials and Tweeners. But these words are only descriptions (and rather dismal ones at that) of existing dominant mindsets in our culture. They do not generate the goals, curriculum and tasks for which today’s children, tomorrow’s rulers, are becoming born and should be raised. It is Psalm 8 which provides that vision. As shapers of these young lives, it is imperative that we catch that vision and make it a reality for them.

Through the psalmist, God directs us to unleash the power and potential of each child to do two things:

(1) ordain praise to God (positive) and (2) silence the foe and the avenger (negative). How do we do this?

Praise does not happen in a vacuum. It is a response to something or someone. Response presupposes a prior transmission of knowledge. It is our job as child-builders to introduce the children in our care to that knowledge — the great Word of God, the great works of God, and the great world of God, day in and day out. And in that long process, we must exhibit our own personal praise (joy, excitement, thankfulness, awe-worship) for them to see and emulate.

“Silencing the foe” also presupposes knowledge—knowledge of the enemy; and it requires action in fighting him. As child-builders we need to instruct children about Satan’s strategies in their own lives and in the world around them. But we also need to administer firm love (discipline) to them when they violate the will of God. If we fail to do this, we are destroying the children, cooperating with the enemy and setting a negative example. Above all, we may not set one standard of obedience for ourselves and a different one for our children. Consistency in precept and practice are imperative. The old adage has a lot of truth in it: “Children will do what you do rather than what you say.”

The Lord Himself provides a curriculum for the training of tomorrow’s kings and queens. He announces at the beginning and the end of Psalm 8: “O Lord, our Lord, how majestic is your name in all the earth!” The curriculum is the name of God. This includes everything by which God is known: His Word, His works and His world. Is there anything that is not enfolded in these three entities? For all who impact the lives of children, the content of your training is clear. Introduce your children, with a passion, to the Word of God incarnate, Jesus Christ Himself, by demonstrating daily the mission He came to fulfill and the power He has in your life. Lead them carefully and thoroughly through the Word of God inscripturated: “Impress them [these commands] on your children. Talk about them when you walk along the road, when you lie down and when you get up. Tie them as symbols on your hands and bind them on your foreheads. Write them on the doorframes of your houses and on your gates” (Deuteronomy 6:7–9). Saturate!

Children also need to be lead to stand in awe (holy fear—something hard to come by these days) of the works of God—works in nature (the grandeur of the mountains, the design of a sparkling snowflake, the protection and care afforded to God’s animals who wear colors that blend with their environments, the mystery of birth, and myriads more), and works in grace (the covenant love of God displayed in His redemption promise, and His patient and gracious arrangement of the details of history to accomplish that redemption and apply it until Christ comes again).

And then there is God’s world: “O Lord… how majestic is your name in all the earth!” (Psalm 8:1,9). “The earth is the Lord’s and everything in it. the world and all who live in it” (Psalm 24:1)—worlds of science, geography, history, mathematics, technology, communications, medicine and so much more! Can you feel the excitement of opening these vistas from God’s perspective for tomorrow’s rulers?

When tomorrow’s rulers become today’s journalists, businessmen/women, politicians, agriculturalists, professors, engineers, educators, health providers and service personnel. what is their task? To paraphrase Psalm 8:6, “Everything is put at their feet.” They are to “rule for God,” that is, they are to manage the air waves so that the audio and visual communications conform to the will of God and benefit. not destroy, His people; they are to refine medical procedures and medicinal drugs for the preservation and promotion of life, not death; they are to fight “principalities and powers” of evil which invade classrooms, courtrooms, media and legislatures; they are to harness the natural resources which God has placed in this earth steel, coal, iron, water in a way which glorifies God and is of benefit to His people; they are to channel the huge and rapid growth of technology to God-glorifying uses; they are to stem the tidal waves to “play God” in genetic engineering—and so the list goes on, and on, and on. The goals of “ordaining praise” and “silencing the foe” are achieved through a curriculum of uncovering the glorious name of God in His incarnate Word, Jesus Christ, in His inscripturated Word, the Bible, in His works in nature and in grace, and in His world. For tomorrow’s rulers, all of these converge on the stupendous task of ruling God’s world for Him and not for themselves.

When you tuck your little ones in bed at night, or discuss issues around the table with your teens, or when you stand before your class of pre-schoolers or preach to your young people — how do you see them? Your vision of them and for them today is crucial for them and the world tomorrow.

P.S. — Parents, when you choose a school to help lead your children through this developmental process, what are your criteria? You only have one time around.