A staple in international, orthodox Calvinism from the opening days of the Protestant Reformation has been the theological distinction between the “Law” and the “Gospel.” What does this distinction mean, and how important is it? Simply put, it contrasts two divinely ordained ways to the obtainment of life eternal, one by meritorious works (i.e., by the “Law”) and one by unmerited grace and favor (i.e., by the “Gospel”).

This fundamental antithesis – reiterated time and again throughout the Bible, both Old and New Testaments – lays at the very core of Protestant evangelical theology, Lutheran and Reformed. Contrary to the claim made by some recent historians of doctrine, there is no disagreement or discord between these two leading Protestant traditions concerning this vital, theological distinction.

Differences of interpretation within Lutheranism and Calvinism do appear with respect to how these two principles of inheritance – works versus faith (i.e., law versus grace) – apply to the various covenants in the Bible, beginning with the unique “Covenant of Works” established by God with Adam in the Garden of Eden at creation, and followed by the subsequent covenants spanning the history of redemption, all of which are subsumed under the rubric of the “Covenant of Grace” (exceptions include God’s covenantal pledge to uphold and govern all humankind in accordance with His “common grace”).

It was this basic, theological antithesis between the “Law” and the “Gospel” that led Martin Luther to recover the biblical doctrine of justification by faith alone – justification apart from the works of the law, even the “good works” of believers (see Ephesians 2:10). In his classic study, The Bondage of the Will, Luther described the desperate plight of sinners. By nature (since Adam’s transgression), humankind is in bondage to sin and death. Only the mercy and grace of God in Christ can remedy the consequences of the Fall. The salvation of sinners is the manifestation of the predestinating, electing love of God. The sovereign Lord of the covenant secures for the sinner that which he cannot obtain for himself. Salvation is all of grace. 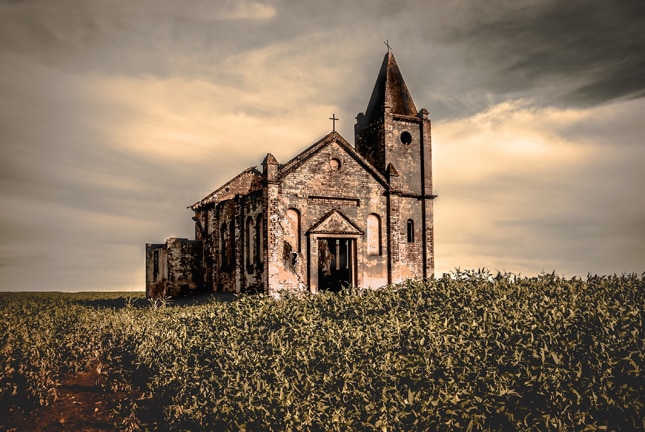 So important was this teaching of the Bible that Luther insisted it was the defining article (i.e., doctrine) of the standing – or falling – church. Any admixture of faith and works (obedience which is in accordance with the law of God, the “good works” of those regenerated, sanctified, and renewed in the image of Christ) is, according to the great apostle Paul, anathema. Why are the good works of believers – works which evidence the “obedience of faith” (Romans 1:5), works truly pleasing to God – excluded from justification (with respect to its constitutive aspect)? Very simply put, the reason is that what is required by the justice and holiness of God for salvation, (re)union, and communion with God, is perfect obedience.

The purpose of Christ’s first coming was to make atonement for sin and to secure the promised inheritance, viz., a people redeemed by the blood of the Lamb. The ground or basis of salvation is the righteousness of Christ alone. His perfect obedience is the exclusive, meritorious basis of life and salvation for sinners, those chosen in Christ by the Father in eternity past. The doctrine of Christ’s meritorious obedience is meaningful only in the context of the system of doctrine taught in the Bible. Here the interpreter of Scripture must come to grips with the Protestant-Reformed teaching concerning the “Law” and the “Gospel.” (For a summary, biblical exposition of the doctrine of justification by faith alone, see Part Two of this two-part series.)

Before commenting further upon the distinctive formulations of Reformed covenant theology, views different from classic Lutheranism, we must first consider why at present we are facing a radical shift in theological thinking – a shift that has led to a crisis in modern-day Protestant evangelicalism. The single-most important factor giving rise to radical reinterpretations of the biblical doctrine of justification, election, and the covenants is the impact that the neoorthodox theology of Karl Barth has had upon evangelicalism, both Reformed and nonReformed varieties.

Barth is (mistakenly) considered by many to be the leading Reformed thinker of the twentieth century. Recognizing the fallacy and bankruptcy of nineteenth-century Protestant theology, Barth undertook a remake of traditional Protestant “orthodoxy,” that produced a theology having superficial resemblance to the theology of Luther and Calvin (most especially the latter). Barth ended up with a new school of theology known as “neoorthodoxy.”

To be sure, Barth is a complex theologian. But one thing is certain upon a close reading of his work: Barth is no friend of orthodox, biblical Christianity. (Of course, there are “evangelicals” who will challenge this evaluation. They do so erroneously.)

From the standpoint of the history of doctrine, it was Barth who spearheaded the transformation of contemporary evangelical theology, the form now dominant. He has vigorously maintained that there is no theological antithesis between the “Law” and the “Gospel.” On this subject, argues Barth, the orthodox Protestant scholastics were wholly misguided and misinformed. (It is important to recognize here that Barth distinguished sharply between the teachings of Calvin and that of scholastic Calvinism.)

Among the philosophico-theological considerations that entered into Barth’s thinking was the (unbiblical) notion of divine grace as that which undergirds and sustains all creation – including the recreation of all things in Christ the Elect Man, the one man for all.

Jesus Christ, according to Barth, is the mysterious, yet sublime, revelation of God’s electing and reprobating will, the seemingly contrary motion of God at work in the redemption of the world. Stated in terms of the doctrine of justification, election, and covenant, Barth taught that there is but one covenant in Scripture, the covenant of grace (hence Barth’s doctrine of monocovenantalism).

Implicit in this interpretation is Barth’s christomonism, the notion that Christ is the fountain or source of life and death, so that in Him lie the final resolution and reconciliation of all things in heaven and in hell – all to the benefit of the world’s redemption (hence Barth’s implicit universalism). There is no ultimate conflict between the love and the wrath of God. Christ has overcome Evil; such is the triumph of divine grace.

According to Barth, law and gospel are merely twin sides of God’s promissory command – the divine command that humankind be in subjection to His sovereign rule and reign, and the divine promise that He is Lord of all. Law is an expression of God’s grace; grace is an expression of God’s law in the world. God’s image-bearer is never in a position of “earning” or “meriting” the love and favor of God. All is received by grace through faith. Humankind’s “fall” from grace is remedied in the death and resurrection of Christ on behalf of all humanity. Christ is the New Man, the new humanity. The Old Man – humanity in rebellion against God, in rejection of His grace – has been subdued and renovated by the messianic Lord, the Son of Man.

In Christ, humanity stands righteous before God, free from all condemnation and sin. Jesus Christ has exhausted the wrath of God for everyman. Although evangelicalism may certainly not agree with Barth in all respects of his formulations, there is growing consensus that law and grace are not antithetical means of inheriting the favor and blessing of God. In particular, the Reformed doctrine of an original “Covenant of Works” has been widely denounced as speculative and unbiblical.

Historic covenant theology represents Reformed thinking in its most consistent expression. From the beginning of the Calvinistic tradition, the doctrine of the covenants – in conjunction with the traditional Protestant “Law”/“Gospel” contrast – played a determinative role in the exposition of Scripture. What gives covenant theology its peculiar character within the broad stream of Christian interpretation is the emphasis placed upon the history of redemptive revelation and the relation of this history to the original goal of creation (biblical protology and eschatology).

For purposes of this presentation, we highlight five crucial and essential biblical-theological elements within the system of covenant theology, what is the culmination of five centuries of Reformed exposition:

(1) the doctrine of probation as that pertains to Adam’s original assignment in the Garden of Eden, Israel’s temporal life and prosperity in the land of Canaan, and the Son of God’s messianic fulfillment of all righteousness (under the law of Moses);

(2) the doctrine of meritorious reward (i.e., legal obedience) associated with the original Covenant of Works (which covenant was perfectly fulfilled by the Second Adam, Jesus Christ, and by him alone);

(3) the term “grace,” which, in accordance with the Protestant law/ gospel distinction, pertains exclusively to the postlapsarian situation (the revelation of God’s saving grace to undeserving sinners after Adam’s transgression in the Garden);

(5) the explanation of the continuity/discontinuity between the old and new covenants (including the “letter”/”Spirit” contrast).

These five elements – elucidated over the course of five centuries of biblical interpretation – are vital to the system of Reformed doctrine. Regarding the evangelical doctrine of justification by faith specifically, modern-day detractors would have us abandon or radically reinterpret each of these points of doctrine. Current debate within several American-Reformed communions (reflecting developments in contemporary evangelicalism at large) focuses upon the distinctive teachings of Norman Shepherd, former systematics professor and successor to John Murray at Westminster Seminary (see his The Call of Grace [Phillipsburg: Presbyterian and Reformed, 2000]). My exposé, The Changing of the Guard: Westminster Theological Seminary in Philadelphia (Unicoi, TN: The Trinity Foundation, 2001), republished in my Gospel Grace: The Modern-day Controversy (Eugene, OR: Wipf and Stock, 2003), chronicles developments at Westminster. This case study is illustrative of changes within contemporary evangelicalism – changes that are for the worse, not the better. (The debate over Open Theism within the “Evangelical” Theological Society underscores the plight of biblical Christianity at the opening of this third millennium of church history.)

To be sure, new questions require a fresh restatement of biblical teaching. Traditional views must always be reevaluated and reformulated in the light of the Scriptures. That task ever remains for the faithful guard, those standing in defense of the biblical, Reformed faith. The responsibility of our generation of exegetes and dogmaticians, and of the generations to follow, is to carry through consistently the insights of our Reformed forefathers concerning the biblical doctrine of the covenants.

In Part Two we turn directly to the question regarding the relationship between the doctrine of justification by faith alone and the doctrine of judgment according to works, what stands as the crux of the contemporary dispute.

Dr. Mark W. Karlberg obtained three theological degrees from Westminster Theological Seminary in Philadelphia, including a doctorate in Reformation/Post-Reformation studies. He is the author of Covenant Theology in Reformed Perspective (2000) and its sequel, Gospel Grace: The Modern-day Controversy (2003), both published by Wipf and Stock.