If you had asked me, I would have said that I knew about the Jews. I thought they were just Israelites waiting for their Savior, but they did not believe Jesus was the Messiah. I thought Judaism did not have any great reforms or thinkers. In my eyes, they were a paused religion, an inactive religion, a backward, waiting, old-fashioned religion. I was wrong.

When I decided to read Cornelius Van Til’s book Christ and the Jews, I was expecting a traditional Reformed book. Something with a little Heidelberg, a little Westminster, a good dose of Calvin, and some TULIP thrown in for good measure. I was expecting the same thing I had read before, revamped and re-presented to be applied to Judaism. I was wrong about that too.

Van Til’s book was difficult to read. It assumed I was familiar with many philosophers and theologians I had never heard of. It assumed I had a working knowledge of Greek, Latin, and German. Despite the hindrance of not understanding German and my own ignorance of Jewish doctrine, this well-researched, well-argued book of complex philosophies and doctrines completely changed my outlook on the Jewish religion.

Christ and the Jews delves into Jewish thinking. It begins with Philo Judaeus of Alexandria (20 BC–AD 50) and follows through to Martin Buber’s (1878–1965) complex I-Thou philosophy. It presents the thoughts of contemporaries and commentators who reacted to Buber’s ideas. The book compares all of this to modern Protestantism, Hellenistic thought, Eastern mysticism, and orthodox Christianity. In four in-depth chapters, Van Til’s book presents Judaism. It shines the light on the inner workings and belief structure, all to better understand how to witness to the modern Jew.

Van Til starts, almost abruptly, with a Hellenistic Jewish philosopher named Philo Judaeus. As a philosopher living in Alexandria at the dawning of the era of Christ, Philo attempted to synthesize Judaism and Stoic thought. He begins with what he calls the “Unknowable God.” He describes God as unmentionable, inexpressible, and in every way incomprehensible. While this seems to be an imitation of Plato’s “Unmovable Mover,” Philo does not get his idea from the Greeks. On the contrary, Philo developed his idea from the Old Testament, beginning with Exodus 33:23, where God says to Moses, “Thou shalt see what is behind me, but My face thou shalt not see.” From this verse, Philo asserts the incomprehensibility of God. He then goes on to argue that if God cannot be understood, He cannot be named. He cites the Old Testament texts “I am He who is” and “I appeared to Abraham, Isaac, and Jacob as their God, but my name, Lord, I did not reveal to them.” After establishing the unknowable and unnamable nature of God, Philo assumes that human reason and divine revelation are in full harmony. To state it simply, if God cannot be fully known by man, then God cannot be known at all. Thus, man’s knowledge is autonomous. This is the crux of Philo’s thought. Of course, Van Til argues that God would not let His own creation blot out His holy name: “He sent his Son, the full expression of his substance to speak out his name among sinful men. This Son allowed his name to be blotted out on the cross in order thus to rename a people in his own name.”

Philo, however, continues to build on his philosophy to claim that man’s knowledge is rational and that he can actively participate in divine knowledge through means of the Logos, which he establishes as the Mediator between God and man. Philo also demythologizes the Old Testament, converting the truth to simple allegory. Van Til summarizes Philo’s thought with the words: “Since he did not read the Old Testament in terms of its fulfillment in Christ, he must demythologize it and thereby reduce its message to that which the higher religions of the East and the best philosophy of the Greeks already knew.” 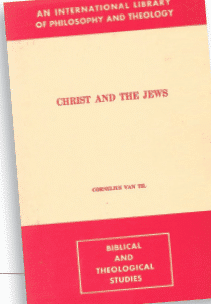 After Van Til establishes Philo’s position, he moves on to the more contemporary thinker Martin Buber in his second chapter. Buber was an early twentieth-century Jewish philosopher who became famous for his concept of I-Thou dialogue. Buber claims that his years of study led to his view of Christ as nothing more than a “great brother.” He sees Christ as an equal and states that Jesus and the Pharisees were in harmony, both focusing on the condition of the heart and not the letter of the law. Van Til argues that by rejecting Christ, Buber and other Jews cannot claim to be monotheists at all. They cannot claim to know the law if they cannot see Jesus as the fulfillment of Moses and the law. Van Til echoes this thought throughout this chapter as he discusses Buber’s dialogical principle and other philosophers, such as Spinoza and Sabbatai, who helped develop these ideas. Not only does Buber disregard Christ but he also reduces the entire Old Testament to simple allegory. Buber’s writing carries strong overtones of Eastern mysticism. An example of this is his perception of evil: “The wickedness of man’s actions [do] not derive from a corruption of the soul, but from the intervention of the evil ‘imagery,’” which is a direct contrast to the Reformed idea of total depravity. Van Til concludes this chapter with a comparison of modern thinkers and their evaluations of Buber’s work. All of these men label Buber’s thinking as “representative of a high or spiritual type of existentialism.” In summary, Buber’s philosophy disregards Christ, the law, and the Torah. It resembles existentialism and mysticism more than any sort of traditional monotheism.

The burning question that remains after Van Til’s coverage of Martin Buber is how Buber could even consider himself a Jew when his ideas are so far from the traditional Old Testament teachings. Christ and the Jews answers this in the third chapter, “The Torah.” Van Til explains how, as Judaism progressed, the method of teaching the Torah was adapted to the progressing times and thought. There was never a single creed that, if believed, made one a Jew. Within certain limits, “belief was free.” However, there was a problem, in that there were so many “customs and practices that had established themselves” that the rabbis could not assert “divine sanction.” The Torah was considered the “ultimate authority,” and since the Torah did not explicitly promote or forbid these practices, the rabbis could not either, as there cannot be two ultimate authorities. Eventually, the concept of the “Unwritten Torah” was solidified to resolve this dilemma. This was the idea that “the Torah contained more than what was set forth in the written text.” It was thought that there was “an Unwritten Torah alongside of the written one, not as its rival nor even its commentary, but so that the two together, written and unwritten constituted the Torah as it essentially was.” The Torah had been reduced to a form that, as one expert states, “transformed the Torah from being only a written document already ancient and in danger of becoming obsolete into a continuous revelation keeping pace with the ages.” This is why Buber was able to consider himself a Jew. He was operating within the Unwritten Torah.

In his final chapter, Van Til turns from normative Judaism to catholic Judaism, explaining some key differences between Christianity and Judaism. The orthodox Christian belief is grounded in articles of faith that cannot be deviated from. It is focused on creed and confession. In contrast, the Jewish faith is a voluntary expression of religious consciousness. It claims no dogma. It has no liturgy. A Jew is born into his faith, and it is this birthright that instills in him the “obligation to work and strive for . . . Israel.” The Jewish aim is to “unite all nations and classes of men in the divine covenant.” It believes in the “autonomy of man” and denies the Reformed doctrine of original sin and depravity. Judaism believes that mankind does not need redemption, but only a return to the right path. This return to God and the divine image is “an internal process within the moral consciousness of man.” This is why the Jew rejects Christ. Not because he is still waiting on his Messiah but because he doesn’t believe he needs one. This is the heart of what Van Til has been saying the whole time. The Jews are ethical optimists; their only creed is that of man’s goodness. They consider the messianic idea of Christianity to be utterly mythological. There is no need for grace, for salvation. Man takes the kingdom of God upon himself.

Who is the Jewish God? I had thought Jews believed in the same Lord as I. But I do not recognize Him in their “wholly unknown and unknowable” God. I do not see Him in their Unwritten Torah or allegorical Pentateuch. I cannot find even a need for Him in their declarations of man’s inherent goodness. To witness to the Jews is not to simply tell them their long-awaited Savior has come. No, to witness to the Jews requires the same approach Paul used as he stood in the center of the Areopagus. We must proclaim to them the Unknown God and that He is not as distant as they think. Not only that, but we must “beseech the Jew to really repent from sin, to repent not in the strength of a righteousness that he has within himself but in the strength of righteousness God has in Christ given unto men.” To witness to the Jews is to introduce them to grace.

Miss Kalisse Van Dellen is a student at Belhaven College in Jackson, Mississippi.