For about a year I attended a church that had very little outreach to the people of its neighborhood. The members were generally skeptical about evangelism. Their reasoning ran like this: “Around here, some people already have a church, so it’s no use talking to them. For the rest, they’re not interested in church. You waste your time with them too.”

I discovered that the church members held a similar attitude toward the possibility of catching fish in the pond at the old farm where they held their annual picnic. “There aren’t any fish in that pond,” they told me. “Just frogs and weeds.”

They laughed when I took a fishing rod from my car and attached a lure.

But they stopped laughing when after a couple of casts, I landed a 40-inch Northern Pike. The big fellow had been lying there in the weeds for years, probably chuckling to himself as one church picnic after another came and went without anyone trying to catch him.

I find an interesting parallel between the church people’s attitude toward the possibility of there being fish in the pond and there being winnable people in the neighborhood. They were skeptical about both! As a result, the congregation had become an ingrown and inward-looking group, with no spirit of creativity or innovation. “Leave your rod in the car, ‘cause there aren’t any fish in the pond,’” summed up their attitude in more ways than one. 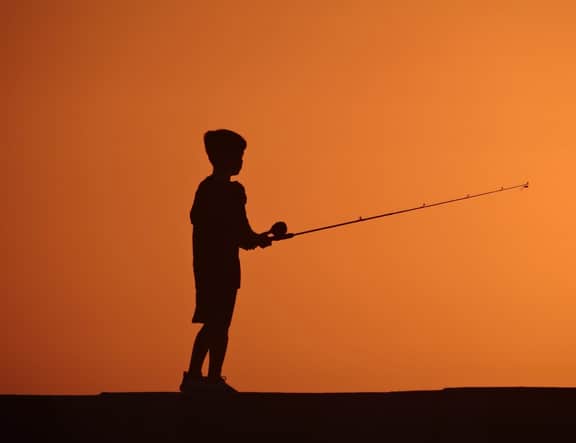 In evangelism, you discover that in some places people are more open to the gospel than in other places. For example, the Bible Belt in the South is a region where a large percentage of the population still looks favorably on Christianity and thinks it is good to be affiliated with a church. Suburban communities are another example. Even in northern states, fishing is predictably better in the suburbs.

But try a different location and you immediately discover a different response. People are cold toward the church and ignorant of basic religious teaching. Fishing on the Asphalt is the title of a book by Herb Miller in which he describes how hard it is for some churches to do evangelism. It’s like “fishing on asphalt!”1

Society as a whole is moving rapidly in a secular direction, and some communities are further down the road than others. It is important to analyze the religious attitudes of whatever segment of the population we are working in. Because, while everyone needs the gospel. not everyone is equally inclined to hear it. Our expectations as well as our methods must be conditioned to some degree by the context in which we work.

Churches located in places where the majority of the population is unchurched, ignorant of the gospel and generally disinterested in the Christian faith, are in mission situations. They need to come to terms with that fact.

Their situation is similar to that of churches in so-called “mission fields” overseas. If churches in mission situations want to grow, they have to become dead serious about evangelism. Nurturing and mobilizing believers, discipling new converts and continually reaching out to unsaved people are the engines that drive a mission church.

Most older congregations located in urban areas are in mission situations, though they may not care to acknowledge it. Older members may talk about the “good old days” when everyone lived close by and walked to church. But those days are past, and the church must learn to live and minister in the present. When surrounding neighborhoods change and people move in who don’t know the first thing about the gospel, congregations find themselves confronting frontier-like mission situations. The new neighbors should be regarded as “mission fields on our doorstep,” brought there by God for a purpose. It’s like finding pools of fish within a pole’s length of your front yard.

The problem is that few pastors are trained to fish in unfamiliar waters. They know how to minister to the believing community but not outside it. They can keep a religious institution alive, but they have no experience in training church members to present God’s Word to people who are indifferent to the practice of religion.

Church members are generally no better than their ministers when it comes to evangelizing secular people. They accept in principle that Christians have an obligation toward the unsaved, but on the personal side they are hesitant to get involved. They despair over declining membership, but they do not know what to do to alter the situation.

The popular way out of the dilemma is to hire church consultants who lead the congregation in hours of study and discussion. But the real problem, the people problem, lies beyond them. Consultants are people with expertise in reorganizing church administrative structures, but they have near zero impact on evangelism. Reorganization is not evangelism and seldom does it contribute to it.

Evangelism has to do with people with God’s Word engaging people without the Word in religious conversation. “Engagement” is where the snag appears. The plain fact is that most of us prefer remaining snug inside the circle of religious people who think and act as we do. We don’t understand secular people for whom churches have no value except to provide services like weddings and funerals. To us, living without God is unthinkable.

So we don’t expect evangelism to achieve anything. We harbor the lowest expectations that secular people can be won to responsible discipleship. Driving through distressed urban neighborhoods, which for some of us means neighborhoods around our churches, we have the feeling down deep that evangelism in such places is hopeless. There can’t be any fish there. Even if there are, they won’t bite. So why try?

In Acts 18, the Bible gives us the story of how the Apostle Paul started the church in the city of Corinth. He began by preaching at the weekly services in the jewish synagogue, where he did his best to persuade jews and Greeks to trust in Jesus (verse 4). But results were meager, and some people became violent when Paul spoke about Christ.

In fact, the situation was so bad that Paul became totally discouraged and intended to leave the city. But God stopped him by sending him a vision. In the vision Paul heard God say: “Do not be afraid; keep on speaking, do not be silent. For I am with you, and no one is going to attack and harm you. Because I have many people in this city.”

Surprise! God had people in that wicked and forbidding place, people God intended to save; and Paul was to be God’s instrument. Paul did not know who was there. Nor did he know God’s plan for each of them. But God did. Out of obedience to God, Paul stayed and kept working, and eventually a church was started. Corinth became Paul’s trophy catch!

Let’s return now to the good people at the church picnic who told me to put my rod back in the car because there were no fish in the pond. At the risk of looking like a fool, I ignored their advice. I cast my line and caught a sizable fish.

There is a lesson here. We need to look aggressively for opportunities to fish for Christ in places that don’t on the surface appear promising. We need to engage in evangelism with the same assertiveness that characterizes missionaries who move into spiritual frontiers overseas and boldly proclaim Christ.

Missionaries often come from communities where strong Christian values are the norm. But the people with whom missionaries come to live and work are largely ignorant of Christianity. Some are even hostile to it. They have their own religions, which they regard as satisfactory.

What basic attitude must missionaries have? Given their circumstances, what prevents them from becoming pessimistic in regard to evangelism and its possible results?

The answer is faith. Missionaries remain optimistic about evangelism as long as they keep believing in a sovereign God who has both a salvation plan which meets the need of all peoples and the power and intention to carry it out. They believe that in God’s plan there are indispensable roles for messengers like themselves. Without that faith, they stay home.

Christians who possess missionary hearts see possibilities for gospel ministry which others overlook. They are moved by the needs of saints inside the church and of lost souls outside. By faith they undertake things too big and difficult for anyone but God to complete. They cast their lines where skeptics say there aren’t any fish, and when fish bite and they land them, they give God the glory.

THE CHURCH ON BRADY

There is a congregation in Los Angeles called the “Church on Brady,” a Southern Baptist church pastored by Tom Wolfe. I first came to know Tom Wolfe in the 1970s when he was leading the Church on Brady through a difficult period of out-migration from their neighborhood and a resultIng decline in the church s membership. What struck me about Tom was his vision for reaching a changing neighborhood and people that were not easy to win. Something told me that this was a missionary pastor who was not going to quit until he caught fish.

Today, the Church on Brady is a model of growth through evangelism in unlikely places.2 The church has not only reached out to its own neighborhood but it has established churches in other communities as well. It has sent missionaries trained in effective evangelism to countries overseas. Without faith and a venturesome spirit, Tom Wolfe and the Church on Brady would have packed their fishing poles and gone away long ago. But they stayed in tough Los Angeles because somehow they heard the same Lord who spoke to Paul say to them, Don’t quit! Keep proclaiming the gospel! For in this city I have many people whom I intend to save.

Roger S. Greenway, Missionary Monthly Associate Editor, has been professor of World Missiology at Calvin Theological Seminary, Grand Rapids, since 1989. Earlier he and his wife, Edna, served as Christian Reformed missionaries to Sri Lanka and Mexico. Dr. Greenway has served as pastor and mission administrator and has written numerous mission books and articles.