James, as we’ve seen, is interested in calling out non-Christian behavior among Christians, not because he’s a moralist but because he wants to show them that what they’re doing and how they’re acting are not in keeping with what and who they are professing. There’s a lot of animosity in the world, especially lately it seems. It’s not surprising that not everyone will agree all the time in this fallen world of ours, and that includes in the family and the church. 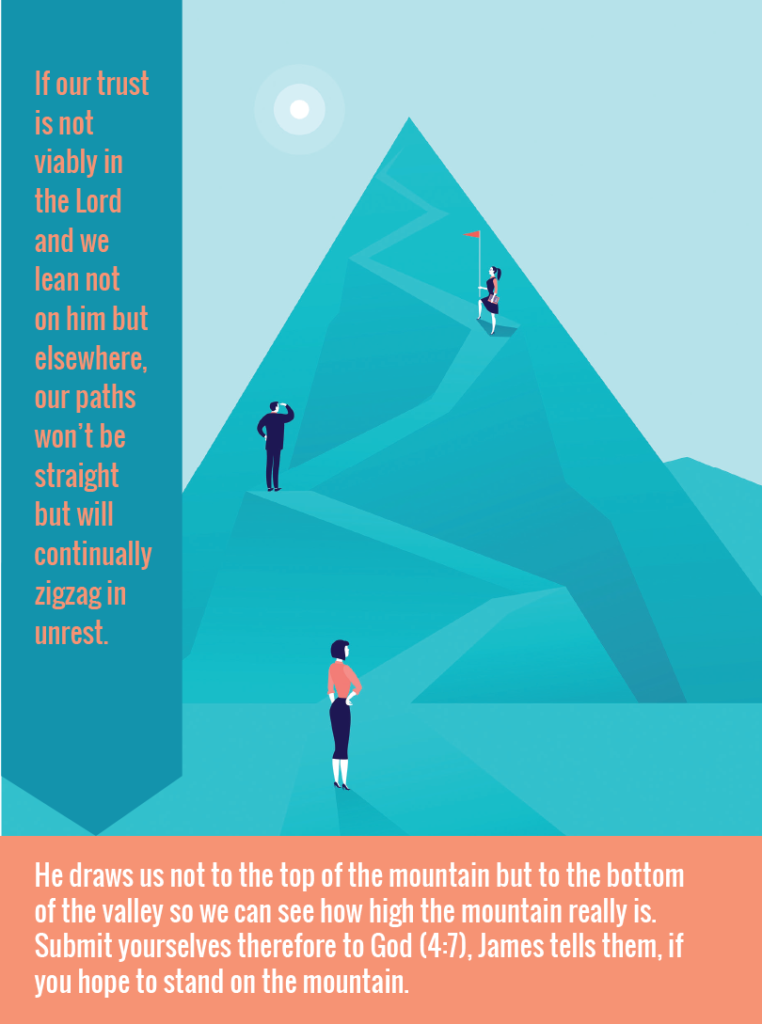 Even a brother, the Scriptures tell us, seems born for adversity (Prov. 17:17). That’s something James and his brother Jude likely knew to some degree in regard to their half-brother, Jesus, with whom they couldn’t really come to terms and hadn’t embraced as Messiah until later. I remember a kitchen table discussion that took place years ago among myself and two other Christian men. Another fellow and I disagreed on a point, even though we agreed about the doctrine from which the point arose. We went back and forth for the better part of an hour until the third fellow, who mostly had sat quietly listening, finally spoke up, and said that I and the other fellow were saying the same thing, just expressing it differently, and he showed us from Scripture how this was so.

The other Christian brother and I piped down and conceded, at least somewhat, and I remember saying later to someone that this was a spiritual a-ha moment—a kind of revelation that scriptural truth transcends our styles or emphases in how we present it. That doesn’t mean every time we disagree with a fellow believer that there is some higher truth that envelopes the argument so that both are right: It may be that one is off, way off, and needs to be corrected. But often there’s something other than zeal for the truth that causes communication between believers to go awry. It may be what we least suspect, and even think we have a handle on as we’re so zealously communicating: the flesh or the natural man.

Battles to Fight and Not to Fight

James puts his finger on the culprit. “What causes fights and quarrels among you?” he asks. “Is it not this, that your passions are at war within you?” (Jas. 4:1, English Standard Version). The word is important here. It means that there is a battle between our spirits (informed by the Spirit) and the flesh in the believer, although in James’s example, the flesh is apparently winning. Also significant are the words he uses, that these passions war within “your members” (King James Version), recalling the apostle Paul in Romans 7, who likewise teaches that it is not you as a Christian, a new creation, that leads you astray, but the sin that still dwells within you. This is the untamed desire that if left to run amok will of course end in quarrels and fights, even among believers.

James also introduces a familiar ogre that pops up in these kinds of frays: covetousness, whether for money, power—and concurrently attention—or for physical satisfaction. Here it seems to be about money and position (4:2). It’s a delicate thing to find that place between what God has given man to do openly—that is, take dominion in the world according to calling—and to not fall into idolatry so that the tools of this dominion, among them money and position, override the God-given calling, and even God himself. In fact, finding this place is such a delicate thing—like finding that tiny click while adjusting a sophisticated machine—that if it were left to us, we’d never find it. It would go too far in one direction or the other. Thank God that he gives more grace (4:6).

James knows his audience, the local Hebrew Christians in and around Jerusalem who likely are already feeling the pressure of identifying with Messiah. They want business success but don’t have it, and James points to the reason. It’s not because they’re Christians so much as because their motives are impure. They want success to satisfy their desires first and foremost, whatever that means: money in the bank, bragging rights, bigger barns. And James doesn’t let them off the hook. He calls them adulteresses—in the feminine form—using the term God uses with Israel through the prophets in the Old Testament (4:4). That means as Christ’s Bride, they’ve turned their backs on their husband and are playing the harlot, not with false gods like Baal or Asherah, but with other, more familiar idols. They prefer friendship with the world to friendship with God (4:4), and James rebukes them openly. Whew! How would you like to have James as a pastor?

Tough Words for the Wayward

James identifies his readers with a wayward wife, a familiar image in the Old Testament, as Israel is depicted in Ezekiel 16. She was chosen and received by her husband and given everything, but then she cuckolded him for others who weren’t even of her husband’s stature. That’s a significant lesson, isn’t it? That God our Father has done so much for us, and that because of who we are, namely sinners, that we can come to take that for granted. We may do so even to the point that we become not only unappreciative of his goodness and grace but also disdain them, and like the prodigal son, go looking for our own versions of goodness and grace, thinking we can find fulfillment elsewhere.

It’s an old story, and a contemporary one at the same time. For James’s readers, this is expressed as their friendship with the world—it’s there where their hearts beat, where their nostrils flare, where what seems to them the richest fellowship can be found. But wait. Why is this bad? The world, after all, is a big place. In fact, it’s everywhere where we are. And besides, aren’t we to find fulfillment in our endeavors, our work, our dominion, as God certainly wants us to do? Doesn’t the Lord himself tell us that we’re to be in the world, though not of it (John 17:14–16)?

Yes, most certainly. But it’s clear here in James’s letter that this is precisely the problem. The saints to whom he’s writing are not only in it—in fact, they’d like to get more deeply in it if possible—but are demonstrating traits of being of it. Their passions and desires have blurred the antithesis that they as Christians should keep clear: the divide between ultimate good and evil, light and darkness, the kingdom of God and all else that is not of his kingdom. But they are not only in the world. No, in a big way the world, James is saying, is in them.

This is not the world of creation or simply of men’s events, business and life, but as John tells us in his first letter, of the desires of the flesh, the desires of the eyes, and the pride of life (1 John 2:16). Anyone who makes himself a friend of these habits of the heart, James writes, makes himself an enemy of God (Jas. 4:4). Notice too that for Christians, the corollary to living this way is, in short, misery: fights and quarrels, unsatisfied desires, hatred, covetousness, and as we’ve already seen, an untamed tongue, as well as partiality or injustice. If our trust is not viably in the Lord and we lean not on him but elsewhere, our paths won’t be straight but will continually zigzag in unrest.

Thank God for his mercy. That’s where James moves next. God yearns over the spirit that he’s made to dwell in us, James writes (4:5). He yearns for the Spirit given us in our spirits, and so draws us forth with him. Believers may bury or drop into a vault the Holy Spirit’s presence in their lives, even to the point of deeply grieving him. But for Christians, the Holy Spirit is always there, waiting to rise phoenix-like. That’s why the apostle Paul tells his protégé, the young pastor Timothy, that the Holy Spirit is to be fanned into flame (2 Tim. 1:6). God, not we, makes himself, the Holy Spirit, living and active in us. But that doesn’t mean we just sit as couch potatoes waiting for that to happen. We are to fan the Spirit into flame.

How do we do that? James tells us. God gives more grace (Jas. 4:6). Good thing, since if it were left up to us, we’d give up. To fan a flame so that it rises means that the wood or coals in the fire need to be further consumed. God gives more grace, but to the humble (4:6), James writes, to those who are willing to have their lusts consumed away instead of continuing to have these lusts consume them. The humble are those who know who they are before God—sinners deserving his judgment, who are poor in spirit and mourn for their sin. The proud, however, will only be opposed by God.

God is the one who gives more grace, but notice, as James explains, this means he draws us not to the top of the mountain but to the bottom of the valley so we can see how high the mountain really is. Submit yourselves therefore to God (4:7), James tells them, if you hope to stand on the mountain. But wait a minute. We’re Christians. We’ve already been there and have done that. We already know all this. Next time I’ll take a look at what these off-kilter Christians need to learn that they think they already have. It’s not complex but simple, and if we’re honest, we’ll see we’re also like these first-century believers more often than we may want to admit.

Mr. Gerry Wisz is a writer, college instructor, and semi-retired public relations professional who, with his family, is a member of Preakness Valley URC in Wayne, NJ.

Both Outside and In, Themes in James: The Way to Find Peace