From a barren wilderness, into a verdant valley—such is the great change prophesied by Isaiah in the fifteenth verse of the thirty-second chapter. Israel, the land and the people, will be transformed by God Himself. The fir tree instead of the thorn, the myrtle tree instead of the brier—this is the picture of prophecy presented by Isaiah (Chapter 55); and this is in line with the divine message in and for each age. 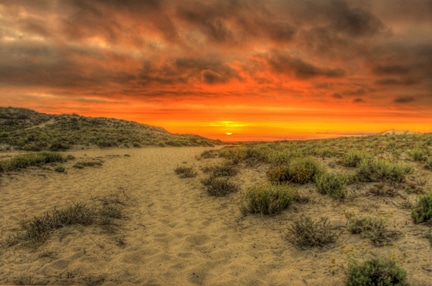 The land changed? No longer the trackless wastes of the burning Sahara? No more the rubble and ruin of war? Paradise to be regained? The garden of God to cover the earth? The city of God to descend from heaven? Yes, the day of the Lord will bring with it the spiritual birthday of this old earth. Her groaning and travailing are prophetic. In the new heavens and the new earth righteousness shall dwell.

Meanwhile we might inquire as to our own readiness for that fair land. It could be that we would not feel at home there. The soil of our own soul is God’s acre. Is it like to a waste-howling wilderness? Are there any fruits worthy of repentance?

As Husbandman and Artist, God, by His Spirit, uses the Word of preaching. This Word of transforming power, inhabited by Himself, is His means of changing character and molding lives.

“Repent, for the Kingdom of heaven is at hand.” With these words John the Baptist greeted his generation. The self-same Kingdom key-note our Lord took up into His public ministry. For this was the age-old message instrumental in replacing death with life. Proper preparation must precede the coming of God, or else. Small wonder that John the Baptist was afraid for his generation. The brightness of divine glory would be consuming fire for all dead wood!

It is noteworthy that Malachi (chapter 4, verse 5) refers to the Lord’s way-preparer as “Elijah.” The Jews of Jesus’ day looked for Elijah to come before the great day of the Lord. Some even regarded Jesus as Elijah (cf. Matt. 16:14). However, Malachi was not wrong in his prediction. To the father of John the Baptist, it is expressly declared that he, the Baptist, “shall go before him (Messiah) in the spirit and power of Elias, to turn the hearts of the fathers to the children, and the disobedient to the wisdom of the just; to make ready a people prepared for the Lord” (Luke 1:17).

Thus it appears that Elijah is the outstanding preacher of repentance. He is the original, as it were. All other preachers, from his day to ours, must perforce follow in his train. He has set the pace; he has sounded the unalterable keynote of the Kingdom. He was the first voice in the wilderness of national and personal apostacy. Isaiah was not far behind in demanding that a highway be laid through the desert, for the Lord to use. Every valley must be exalted and every mountain and hill made low. The road must be level. So too runs the message of Malachi and John the Baptist.

The Urgency of Current Preaching

With Christ, the Kingdom came in its New Testament phase. Preaching is proclaiming this good news; incidentally, this is the meaning of the most commonly used word for preaching. The second most used word for preaching in the New Testament is “heralding.” It cannot be that the coming of the King go unannounced. Accordingly God commissions messengers to precede Him and prepare the way for Him. And today the accent falls on the second coming of the great King.

All the more urgent is the need for transformation of life. All the more necessary that God has his way in our life by the agency of his Word.

Paul, in Romans 6:17, declares that his readers obeyed the form or pattern of doctrine, whereunto they were delivered. Even if we follow the rendering: “that form of doctrine which was delivered you”—we cannot escape the force of the expression—“form of doctrine.” It suggests an engraver’s stamp used to impress a certain character on material at hand. This “pattern” may also be looked upon as a mold or die into which molten metal is poured. The resultant product of very specific design is permanent. True, our lives are not inert matter. But the impression of the preached Word is to be definite and clear-cut. By nature we are twisted into the dimensions of the lie. Gradually we are to be remolded into the pattern of the truth. The image of God again takes shape. The measure of the stature of the fullness of Christ becomes reality for us and in us.

The Centrality of the Pulpit

How natural and proper that the pulpit, with the open Bible upon it, is central in Reformed worship. The sermon is the Word of God as preached. As such, it is the power of God unto salvation. It is the Holy Spirit who gives utterance to the preacher; it is he who sanctifies in the truth. Doctrine? Teaching? Many winds are blowing from many different quarters. In the battle of and for the truth the best defense is a good offense, which calls for our being possessed by the truth. Sound, healthful doctrine exerts a formative influence. New men, rather than “nice people.” Strong men, steadfast, unmovable, always abounding in the work of the Lord.