A couple of years ago I had lunch with a prominent professor of a prestigious seminary in the southern states. I asked him what he thought was the most difficult aspect of being a seminary professor. Without pause, he responded, “It is seeing how many of our graduates do not remain in the ministry.” He went on to lament how some leave for other vocations but most leave due to the pressures of ministry. And, sadly, he added, many are deposed.

The first set of problems in this series of articles deals with that which leads to an Article 61—leaving the ministry because of disciplinary reasons: being deposed from ministry. Obviously nobody wants that, and yet, sometimes we set ourselves up for it. I want you to consider with me your besetting sin. A besetting sin is the sin that Satan doesn’t have to work hard at to get you to fall. In fact, your own totally depraved nature leads you in that direction. Satan has been working on you since you were a little child, and he knows what trips your trigger. So much so, that you may even have gotten to the point where you don’t see it as being wrong. I don’t know what your besetting sin is. I hope you do, because the first step in overcoming your besetting sin is to acknowledge it. I set before you in this article two such sins. Two sins that are very common; two sins that have ensnared many a minister.

The first sin is adultery. Obviously, if you have an affair, you have no place in the ministry. I know many young men who were cautioned about the dangers and temptations of adultery who rolled their eyes and said, “That will never happen to me.” They are no longer in the ministry. Some were addicted to pornography; others were engaged in sexual activity with women in their congregations. One thing a minister can be certain of is this: the opportunity will present itself. Ministers enter into a unique relationship with individuals they are counseling. Those whom you counsel will tell you things they will not tell their own spouses. A trust is built. And, too often, that trust grows beyond the counselor/counselee relationship.

What do you do when you are counseling a young woman in your study and she starts undressing? My first counseling case happened one week after I was ordained. A young woman came to my study and told me that her minister was sexually molesting her. I informed some of the elders of the church where she was a member of the accusations she had made. After some initial denials, the minister admitted that he was involved in a sexual relationship with the woman. He blamed the woman, claiming she was a nymphomaniac. He went so far as to declare himself the victim of her prowess.

This would be akin to someone coming to you for help because he loves to give money away and your response is that you can help him—for $250 per hour. It doesn’t matter who comes to you or what that person’s problem may be. If you take advantage of the confidence that a person has placed in you, you are at fault.

We ministers like to be heroes. We like to help people. We do, however, have to know that we are called to be Minister of the Word and Sacraments. We cannot solve every problem that comes our way. We have limitations. Unless you have taken some advanced classes in counseling, the role of the minister should be to assess a problem and then refer an individual to a professional counselor.

What will happen when you go to visit a woman in her late twenties who is suffering from depression and she meets you at the door dressed in her bathrobe? That’s not that unusual, is it? After all, she is suffering from depression and sleeps most of the day. She invites you in, and as she sits down her bathrobe flies open and she makes absolutely no move to close it.

And it is just the two of you.

Even if that is the case, let us suppose she goes to an elder and says something did happen. How will you prove it didn’t? Don’t ever visit a woman alone!

I have a good friend who was accused of inappropriately touching a woman he was visiting. He denied it. He said it absolutely never took place. It was his word against hers.

I believed him. I went to court with him; spoke to his elders; and defended him in classis. Unfortunately, you can’t prove something that didn’t happen. The woman later recanted and said it never happened, but the damage was done. To this day some people still believe he inappropriately touched the woman.

This episode ruined his ministry. It happened over two decades ago, but the man has never served another church. Who is going to call someone with this charge (whether true or false) hanging over his head? Don’t even let the hint of an accusation come against you. I am so thankful that my office is in the house. I make sure my wife is home and the door is open if I ever have to visit alone with a woman. I meet those who won’t come to the house at a restaurant.

Of course, that has a way of backfiring, too.

When several people in the Christian Reformed church I was serving left to become independent, I accepted the call to be their minister. It was a nasty split, and I was persona non grata at the church we had left.

An attractive young couple joined our congregation, and it didn’t take long before they acknowledged that they had some marital problems. They asked for help, and I met with them regularly for a while.

One night I got a phone call from the wife. She asked if I could come over and meet with her. There was absolutely no way was I going to her house if she was the only one there. I didn’t trust her, and I certainly don’t trust myself enough for that. I suggested that we meet at a local restaurant. 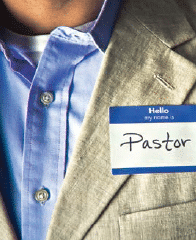 We got there at the appointed time and picked a secluded corner where we could talk over coffee and pie. We weren’t there for fifteen minutes when twenty people from the church we had left showed up for the restaurant’s buffet dinner.

I tell you, the looks I got sitting there with another man’s wife!

When that meeting was over I immediately called every one of my elders and explained to them what had happened, because I guarantee you the rumors were going to fly.

Let me tell you, if wandering eyes are your besetting sin, the devil will give your eyes all kinds of places to wander.

I highly recommend Every Man’s Battle by Stephen Arterburn and Fred Stoker. It’s not Reformed, but it will convince you that we men have allowed ourselves to be duped by the devil into thinking all kinds of sexual sins are acceptable. Then it offers a battle plan to get over it. I have used it in counseling and strongly encourage you to read it and use it when necessary for people you counsel and for some of your own battles with sexual temptation.

The second biggest thing that gets ministers into trouble is something that they don’t see as trouble, and that is their use of alcohol. And I know the arguments—believe me, I know the arguments. Been there, done that. I used to love to drink. I am so thankful that the Lord removed those taste buds from my mouth before I entered the ministry.

I have seen enough ministers who, if they are not alcoholics, are borderline alcoholics. I knew a minister who carried a flask around with him—even when he was at his study in the church. He claimed it was a gift, and he filled with Kool-Aid. The first thought that came to my mind was, “Why would anyone entertain the thought that a flask would be an appropriate gift to give a minister?” I have dealt with ministers who have said to me, “I don’t have to drink. I just like to drink. I can put it down any time.”

Then put it down.

I am not a prohibitionist. However, ministers must remember the influence they have on their own children and on the young people of the church they serve. It is incredible. They will use what a minister thinks he can control as an excuse to go out of control. Alcohol will get you into all kinds of trouble.

One day, he hit the mother lode: a whole boatload of empty beer cans. Wow! He picked them up and put them in a bag in the garage. The key to the church was in the garage of the parsonage next door. Sure enough, somebody from church needed the keys and saw all the empty beer cans. “Ja. And the young people were over last night.”

By the time the rumors and gossip got back to the minister, it was too late. Within six months his ministry was done.

Yes, I know and you know that’s not right. But that’s the way it happened.

I know these are all anecdotal stories about what happened to other people in the ministry. Sadly, I could go on to list several more tales of capable men whom God had called to the ministry but got caught up in a world of sin. I do not bring up these events to open up old wounds or past sins. They happened to real people—men called by God to serve Him—men whose lives will never be the same. If you get nothing else out of this series of articles, please be aware of how quickly Satan can entrap you in his clutches through the sins of adultery and alcoholism. There is a reason why the Bible says there shouldn’t even be a hint—not even a hint—of malice in us. Ministers are to be examples to others. Whether we like it or not, we live in glass houses. People are watching. They watch because they love us and want to encourage us. They watch because they want us to love them and encourage them. And when we become entrapped by sin, it affects them.

1. I realized quickly that none of my counseling classes in seminary had covered this topic.