In the eleven issues of 2007, we present a study of the ten plagues of the great exodus. We will see how the conflict that began in Genesis 3:15 extends to the book of Exodus. Genesis 3:15 is prophetic. As the divine Prophet, God is describing the basis for the unfolding of human history. In verse 15, God defines the relationship between the serpent and humanity. With the statement, “I will put enmity between you and the woman,” the relationship between the woman and the serpent is redefined. The term “enmity” is related to the term enemy; it means that there is hostility between two parties. The noun form occurs five times in the Old Testament, and in each case it communicates severe hostility, the type of hostility that results in murder (Ezekiel 25:15; 35:5; Numbers 35:21–22). 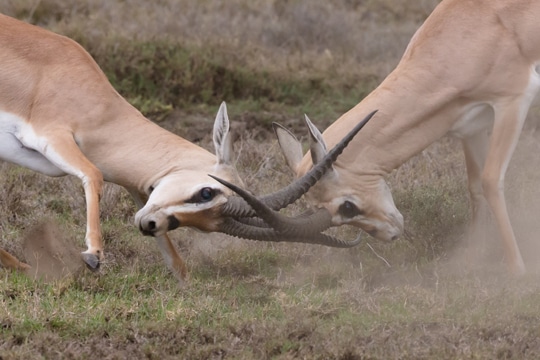 By personally appearing in the garden and speaking directly to the serpent and the woman, God is announced a new order. The original order of creation had been altered. Extreme hatred, animosity and the desire for bloodshed would characterize the new order.

It is important to note that God is the one setting up this new order. An outside authority did not impose this new order upon God against His will. God is in control of human history from the beginning, and remaining so to the end. As the author of providence, God is managing human history according to His good will and His pleasure. This conflict is described in three stages. The first stage of the conflict is between the serpent and the woman. God addressed the serpent first with the personal pronoun “you” because God was speaking directly to the serpent. In the previous verse, God had just pronounced a curse upon the serpent. The serpent was more cursed than all the other creatures that God has created.

The second stage of the conflict is between “your seed” and “her seed.” The two seeds both exist within humanity. All men are spiritually related to one of the two seeds. The Hebrew term for seed is commonly used in reference to lineage or posterity. In the context of Genesis 3:15 the reference to seed is not a reference to physical lineage, but to the spiritual lineage of Satan and the woman. According to the Scriptures, Satan is a fallen angel. As a fallen angel there is no biblical evidence that he has the ability to reproduce physically. In John 8:44 Jesus said to the Pharisees “You are of your father the devil.” The Pharisees were not physical descendants of Satan, but they were spiritual ancestors of the Devil. By way of contrast, Jesus also taught that His heavenly Father has spiritual sons and daughters. In the Lord’s prayer Jesus taught his disciples to pray “Our Father who art in heaven.” Therefore, we should understand that within the context of humanity there are essentially two seeds, the seed of the serpent and the seed of the woman.

In the book of Genesis the reader does not have to wait long before the enmity between these two seeds is displayed through two brothers. Cain and Able shared the same biological father and mother, but they did not share the same spiritual pedigree. In Genesis 4, Cain is identified with the seed of the serpent. Cain rose up against the seed of the woman; he murdered Abel, his own brother. This conflict between the two seeds can be seen throughout redemptive history.

The third stage of the conflict is between the serpent and the Messiah. Genesis 3:15 contains the promise that God will deliver His people through the seed of the woman. The Bible traces the development of this Messianic promise to the person and the work of Jesus Christ. From this point on, the Scriptures reveal an unfolding of redemptive history in which Jesus Christ is presented as the fulfillment of the promise that God made in Genesis 3:15.

This conflict is vividly portrayed in Luke 4 following on the heels of Jesus’ baptism and the beginning of his formal ministry. Jesus is led into the wilderness to be tempted by the devil. As the second Adam, Jesus withstands this ordeal.

The Growth of Emnity

Now that we have the lens of Genesis 3:15 in place, we should be able to see how important the two seeds are for understanding the conflict between Pharaoh and God’s people. In the book of Exodus, the enmity is no longer limited to two people; Cain and Abel, Jacob and Esau, but now the conflict is extended to two nations. Two nations are in conflict.

In Exodus 1, the Hebrews have experienced God’s blessing. God has caused them to be fruitful and to multiply greatly; they are swarming and abundantly filling the land. Eventually there is a new Pharaoh; a new political power emerges in Egypt. We are not told the name of the new Pharaoh or his origin, but the new king does not have the same loyalty to Joseph and to the Hebrews as the previous kings have had. The new Pharaoh begins to view the Hebrews with suspicion. He is threatened by the incredible growth that Jacob’s descendants have experienced in the land of Egypt. By comparison, the Egyptians have not experienced the same growth.

“Behold, the people of the children of Israel are many and more numerous than we are.” The Israelites were perceived as a threat to Egyptian sovereignty. This idea is much more explicit in the original Hebrew than it is in most English translations.

Pharaoh responded to the threat by enslaving the Hebrews and afflicting them with burdens; they are forced to build the store cities of Pithom and Rameses. Institutional slavery was imposed on the Hebrew people as a means of controlling and oppressing them. Pharaoh was not content to control the people, however; he wanted to reduce their numbers through oppression. The oppression that the Egyptians imposed upon the Hebrews should be viewed as an act of hostility. The oppression was an act of enmity whereby the seed of the serpent is trying to oppress and destroy the seed of the woman.

In support of this interpretation, the prophet Isaiah later used the Hebrew word for burdens to describe the work of the coming Messiah. In Isaiah 53:4 the prophet writes, “Surely He has borne our griefs and carried our sorrows; Yet we esteemed Him stricken, smitten by God, and afflicted.” In verse 11 Isaiah develops this idea further, “He shall see the labor of His soul, and be satisfied. By His knowledge My righteous Servant shall justify many, for He shall bear their iniquities.”

The Seeking of Glory

Returning again to the book of Exodus, consider verses 1:10-14. In this short passage there is an allusion to the story of Babel. In verse 10, Pharaoh says, “Come, let us.” Those are the same words used to introduce the intent of the wicked men in Genesis 11. In Genesis 11 ungodly men conspired to build a city with a tower reaching into heaven. In Exodus the Egyptians are pictured building cities out of brick and mortar just like the people of Babel. What is the point of this connection between Genesis 11 and the first chapter in Exodus? The serpent and his seed have not changed. The serpent continues to inspire his followers to seek their own glory and honor over and against the glory and honor of God.

Throughout history ungodly men act in the same way: they build edifices to their own glory and honor. The fact that one of the cities is called Rameses, presumably after the name of the reigning pharaoh, confirms this conclusion. From the time of the fall, the power brokers of this world have been consumed with their own power and glory.

In contrast, godly men are consumed with the glory of God. The true people of God are characterized by their concern for God’s glory and not their own. They worship and exalt the one true God, the Creator, the Redeemer, and the Consummator of human history.

Pharaoh’s plan to destroy Israel did not work because a greater power than Pharaoh was in control of the situation. The Egyptian scheme to oppress the Hebrews as a means of reducing their numbers was turned back on Egypt. In verse 12 the Hebrew word translated “spread” in the NIV carries the idea of breaking out or bursting forth from the womb (Genesis 38:29). Such an increase should be understood as a partial fulfillment of God’s promise to Jacob. The descendants of Jacob are breaking out in great numbers and filling the land.

The situation must have been very frustrating to the Egyptians. The initial reason for their oppression of the Israelites had to do with the fact that they perceived the Hebrews as a threat to their sovereignty. In their attempt to correct this perceived problem, the problem becomes even more severe. In response to the Egyptian oppression the Hebrews are multiplying at an alarming rate. The intentions of the Egyptians are thwarted by God; in the face of oppression God is blessing Israel.

In this conflict we see the intense animosity that exists between the two seeds, but we also see how the seed of the serpent is ineffective in thwarting God’s plan. God is faithful to His covenant promise, and God is effectively carrying out His plan of redemption.