From the very beginning, the desire of the human race has been to have fellowship with God.  Before the Fall in the Garden of Eden, Adam had around him all kinds of objects in which he could take delight with God.  All creation had been formed and had been pronounced to be “very good.”  To know God as the great Creator, to understand the beauty of general revelation in all that was around him, had to be a grand and glorious thing for Adam.

But Adam lost it all when he fell. Instead of communing with God, he ran from God.  He hid himself in the very garden that once revealed God to him.  No longer was there any common ground on which he might stand and meet with God.

So it remains to this day.  Man, by his very nature, is still distant from God.  He remains out of fellowship with God.  We think we can only be at ease when we can keep our distance from God.  Man has rejected God, has said he does not need God, and has even denied the very existence of God.  Sinful man, left to himself, has nothing in common with God.  He has rejected the very thing he needs most: fellowship with God.

And then special revelation suddenly breaks through.  Paul writes, “but now, in Christ Jesus you who were once far off have been brought near by the blood of Christ” (Ephesians 2:13).  Not only can we come near to God once more and have access to God, but we can have fellowship with the Father through His Son, Jesus Christ.

In the Old Testament That point was made very clear to the Israelites through the tabernacle.  It was made particularly clear in two pieces of furniture within the tabernacle, the ark of the covenant and the table of showbread.  Between these two pieces of furniture we can see some similarities as well as some differences.  Both were made of the same material: acacia wood overlaid with gold; both were the same height.

Along with those similarities, there was also a great difference.  Separating them was a great veil.  One was in the Holy of Holies, the other in the Holy Place.  The ark of the covenant had the mercy seat of God above it; the table of showbread was illumined by the golden lamp stand.

The ark of the covenant represented the throne of God.  There one would meet God as King in all His authority and majesty.  We see Him there in His regal splendor as One before whom we must bow. Meeting someone at a table, however, is something different.  When someone invites you to dine with him and sit at the table with him, it means friendship and  fellowship. The table of showbread was on the people’s side of that veil rather than on God’s side.  It was an illustration of God’s providential care for His people.

The showbread was to be put upon the table in the Holy Place on a regular basis—every Sabbath Day. It was to be unfailingly put there every week.  By requiring this, God was illustrating to His people the regular and unfailing way in which He provided for the ordinary wants of His people.  The God of the showbread is the God in whom we live, move, and have our being. The shelter we have from the cold, the food we have on the table, the clothes on our backs all come from God.  We cannot do anything without Him.  Were God to stop His work in nature, we would see how utterly fruitless all our work would be.

The twelve loaves of bread upon the table represented the twelve tribes of Israel encamped around the tabernacle.  The royal Judah, the priestly Levi, and little Benjamin each had a representative loaf.  Not one of them was forgotten.  Not one was favored over the other. When the eye of the Lord rested upon the table, it rested upon His people. 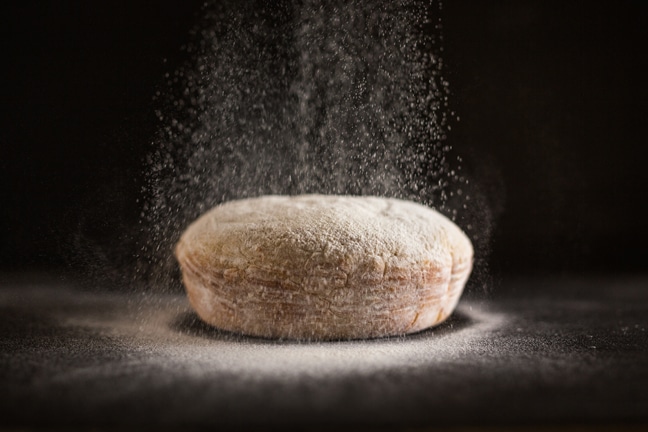 In addition, Jehovah provided this table for His priests.  The bread upon the table became their food. The loaves that were removed from the tabernacle were delivered to the priests to eat throughout the week.  As the bread was replaced on the Sabbath Day, the priests fed upon the holy bread before the Lord, sharing it, as it were, with Him, thereby symbolizing a dining with God.  What a wonderful way to symbolize fellowship with God: dining with God.

As we move to the New Testament, we must see that the showbread in the tabernacle was a foreshadowing of Jesus Christ. Jesus is pictured many times as the Bread of Life in the Word of God.In John 6, for example, Jesus referred to Himself as the Bread of Life that came down from heaven to give life to all who receive Him.

The day before Jesus made that claim He had fed five thousand people using fives loaves of bread and two fish.  The people wanted Jesus to duplicate the miracle. “Feed us again,” they shouted.

They expected of Jesus what they knew of Moses.  Moses had fed the people in the wilderness with manna—day after day, six days a week for forty years.  They had been taught that when the Messiah came, He would reproduce the great miracle of the desert.  And what was that great miracle: the manna falling from the sky.  The multitude that had been fed began to think that perhaps this Jesus was the Messiah.  Feed us again.  “We will believe in you,” they said, “if you feed us as Moses did in the wilderness.”

Jesus paused to correct the crowd. He reminded them that the manna was not a miracle of Moses; it was a miracle from God.  The point that Jesus was trying to make was that He had not come to feed the people physically, He had come to feed them spiritually.  Yes, the manna was important.  Yes, it was certainly a fine illustration of God’s care, but what would it profit the people if Jesus fed them again for a day, or a week, or even for forty years if they remained in the desert?  What benefit is the manna from heaven if one never enters into the Promised Land?  There were many people who ate of the manna but never entered into the promised rest. They never crossed the Jordan; never had that fellowship with God that every heart needs and every soul desires.  What good is it to be in the Garden of Eden if you are going to spend your time there hiding from God?

The multitude that wanted Jesus to feed them again was pointing to the wrong bread.  That great miracle within the wilderness that Jesus came to reproduce was not feeding the people physical bread, it was nourishing them with heavenly bread.  It was not the manna from heaven that was the great miracle!  The greatest miracle in the desert was the fact that God had come into their midst and that He would have fellowship with them.Where did that take place?  That took place in the tabernacle. Where in the tabernacle was that best illustrated?  It is best illustrated by the bread on the table of the showbread.  When Jesus said, “I am the Bread of Life,”  He was declaring Himself as the bread within the Holy Place—the Showbread!  Jesus came to give us the true bread, the bread that will bring us into fellowship with the Father, and whoever eats of this bread will have life.

Sometimes we are so lost in our sin that we think only of the manna that God can provide.  Like the multitude in John 6, we cry out, “Feed me, give me more—more stuff, that is.”  We want success, popularity, the world and all it has to offer.  We are more than willing to acknowledge that every good gift comes from God.  We are more than willing to thank God for our “Name it & Claim it” religion.  But what will it profit a man if he gains the whole world and he loses his very own soul?

God not only nourishes us with the food we have on our tables.  God not only gives us shelter from the cold.  God supplies us not only with earthly blessings.  He brings us not only general revelation, He nourishes us with Himself.  He is the bread.  He is the one of whom we must partake in order to dine with Him and have fellowship with Him. Whoever comes to God though His Son, Jesus Christ, will never hunger again.  You will dine with God!

The New Testament Jesus said, “Behold, I stand at the door and knock; if anyone hears my voice and opens the door, I will come in to him, and will dine with him, and he with Me” (Revelation 3:20).  Jesus has said, “Come, dine with Me.”  Do you see the correlation between what happened in the Old Testament, what took place in John 6, and that which occurs within the church?

Those who are in Christ are a royal priesthood.  Through Christ, they are invited to have fellowship with God—to dine with Him.  The priesthood feeding upon the showbread at the table in the Holy Place points to that special expression of communion that God has with believers who gather around the Lord’s Table to partake of the Lord’s Supper.  The same love that provided a table in the midst of the howling desert and gathered His priests around to eat has spread a table for us.  No longer need we be strangers.  No longer are we aliens in the Garden trying to hide from God.  No longer need we be out of fellowship with the One who created us.  Our heavenly Father has provided a way to Himself.  That way is His Son, the Bread of Life.

At the table the priest was the giver and the receiver.  Every Sabbath the priest would come with fresh showbread to present to Jehovah and every Sabbath he received, as if from Jehovah’s very hand, bread to eat.  The one expresses the giving of ourselves to Christ as we draw near to worship; the other illustrates the presentation of Christ to us as the bread upon which our souls may feed.

Rev. Wybren H. Oord is the Pastor of the Covenant United Reformed Church in Kalamazoo, Michigan.  He is also the editor of The Outlook.