And Mary said, “My soul magnifies the Lord, and my spirit rejoiced in God my Savior.” Luke 1:46–47

Christmas is a delightfully exciting time! What fun it is to put up the tree. In our house we have three trees. We decorate the house, we shop for gifts, we anticipate opening gifts, and there is always lots of candy and cookies around at Christmastime.

As exciting as all of this may be, the time leading up to the first Christmas was so much more exciting for Mary than it is for us. An angel had visited her. She had received a message from the God of Abraham, Isaac, and Jacob. She was going to have a Son, even God’s own Child. The God who had given His promise of life. The God who had given His promise of love was about to reveal to the world His greatest promise of life. He was about to give His greatest display of love!

A Song of Joy

Mary’s song is a song of joy and gratitude. It speaks of God’s goodness and God’s greatness. It is a personal confession of His love, His mercy, and His grace. Just think of what God has announced to Mary through His angel. The birth of the child who would be called Jesus was the hope of redemption being fulfilled. Nothing like that had ever happened before. Oh, there had been plenty of times when God’s people were saved from their enemies. There had been prophets before, but all those events and prophets foretold of this day. This day when a Savior, when “God with us,” would come into the world! And Mary was chosen to be the one through whom this prophecy of life and love is fulfilled.

And why Jesus? Why would God send His Son? Why should God send His Son into this sinful world? Because of His promise of life and His promise of love. Because the love of God has no limit. His love knows no measure. The love of God is like a river that empties itself but never runs dry. What else could Mary do but sing a song of praise to Jehovah, the God of promises fulfilled (vv. 46–49)?

A Song of Deliverance

In addition, the song of Mary is a song of deliverance. God had promised salvation in word and in deed. The last few centuries had been woefully discouraging for Israel. The voice of prophecy was no longer being heard. The hated Romans had subjected the country to an oppressive tyranny. Where was the hope of Israel? How long would the Lord tolerate this chastisement of His people?

At last, the messenger of God comes to Mary and tells her that God has not forgotten His promise. One named Jesus is coming. And the messenger says (v. 22), “He will be great and will be called the Son of the Most High. The Lord will give Him the throne of His father, David, and His kingdom will never end.” 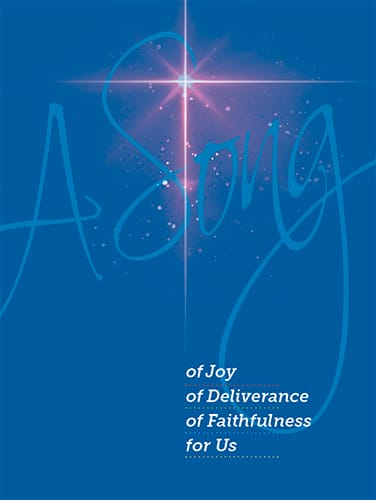 A Song of Faithfulness

And finally, Mary’s song is a song of God’s covenant faithfulness. One thing had always been a comfort to Israel: the promises of God. His promise of life and His promise of love. Many times in the Old Testament those promises had been expressed and expounded upon. Many times those promises were all Israel had to hope upon. That God would be faithful. That God would remember His people.

Ultimately these promises were all wrapped up in the swaddling clothes of the manger, in the Messiah, in Jesus Christ. Every word of prophecy, every sacrifice Israel made, every experience of deliverance pointed in His direction. They all pointed to Jesus Christ. In the incarnation, God was sending real help to His people. It was His crowning act of mercy and the fulfillment of God’s promises to Adam and Eve, and to Noah, and to Abraham and to his seed. He is the hope and consolation of all who look to the Lord.

And so, having been addressed by the God of her fathers, having been thrilled by the confirmation of that promise by Elizabeth, what can Mary do but sing this song of joy (vv. 54–55): “My soul praises the Lord and my spirit rejoices in God my Savior”?

A Song for Us

Certainly Mary was unworthy to give life to the Son of God. But how much more unworthy are we to have Him die upon the cross for us because of our sin? What a great love God has shown to us in that while we were yet sinners, Christ died for us! It is with a great salvation that God has delivered us through Jesus Christ. It is a salvation that is truly so much greater than the one Mary expected. Mary thought her son would somehow deliver Israel from national oppression. But Jesus came to deliver His own from our spiritual oppression. He came to deliver us from Satan. He came to deliver us from sin. He came to give us new life, everlasting life. A promise of life fulfilled in a way no Old Testament prophet could have dreamed possible. A promise of love fulfilled in a way Mary could not have dreamed possible.

What should our response be to God the Father for the love He has shown to us in Jesus Christ? We should have great gladness in our hearts, even as Mary did when she sang her song. We should rejoice in God our Savior, welcoming Him into our hearts, trusting in Him for our salvation, believing that Jesus is the fulfillment of God’s promises.

Every time you drive through town to see the Christmas lights, remember the promise of God’s love given to us through Jesus Christ. Remember also the assurance of new life given to all who trust in the sacrifice that Jesus Christ made on our behalf. May the red lights remind us of our sin and how they have been washed whiter than snow. Let the green lights focus you upon the promised Savior and the new life that is ours in Christ Jesus. Use the blue as a reminder that we, like the wise men, should worship the One whom the Father has sent to save us. And let the purple lights remind us to live all our lives in service to Jesus Christ.

We have seen a great light. Let us no longer walk in darkness.