By the 1990s it was apparent that a serious alternative to AIPRAL (the liberal Reformed association) was needed if any coordination and mutual support were to occur in Latin America among the confessionally Reformed churches. CLIR was founded in 1993 as a joint effort of the Mexican National Presbyterian church and the Presbyterian Church of Brazil, in conjunction with the PCA in North America. I attended the organizational meeting in Miami in 1994 and was assigned to the theological committee. Our goals were set high, and there was great enthusiasm, but as is the case with many of these kinds of efforts, most people forgot about CLIR upon returning home.

My wife and I had been working in church planting and theological training in Central America since 1985. There had been no effort by our mission agency to establish any relationship with other Reformed bodies in Latin America. As I began to relate to other Reformed leaders, I found that this was the case in many instances. Most Reformed leaders had no contact with anyone else, and many didn’t even know there were other Reformed bodies in Latin America. On the part of both mission agencies and national denominations there was a tremendous lack of vision for Latin America as a region, as well as a lack of vision for theological and educational resources in Spanish for the region. A myopic disease plagued the great majority and contributed to a Reformed church which was experiencing atrophy instead of health and vitality.

Because CLIR was not making any progress in its goal to help the Reformed denominations broaden their vision for ministry in Latin America, I was asked in 1997 to take the role of executive secretary. It was made known to me that there was no budget and no salary—that would be my responsibility! In faith I asked Bethany URC (Wyoming, MI) to call me, and the Lord has never failed us. Times were quite difficult at first, but God has been good, and eighteen years later we can truly say “Ebenezer”! As more and more churches found out about our work, support gradually increased, until today we have a significant ministry which employs several full-time and part-time people.

One of the first things we did was to establish the first Reformed theological journal distributed in all of Latin America: Reforma Siglo 21 (Reformation Twenty-first Century). Printing began on a small offset press donated by the Escondido URC, and our first run was three hundred copies, folded and stapled by my children in our home before they could go out and play! This memorable year was 1999. The journal was an immediate hit, and subsequent runs went from five hundred to eight hundred to one thousand to four thousand! Almost suddenly CLIR was able to spark theological interest and dialogue among Reformed denominations that had been sinking into lethargy. Several groups joined CLIR, severing their relationships with AIPRAL, and others began combatting liberalism in their denomination. CLIR’s place as a catalyst and a leader in promoting confessional, Reformed orthodoxy was quickly established. To date CLIR has published sixteen years of journals (bi-annually) and shipped thousands.

From the outset, the MINTS Seminary, directed by Dr. Neal Hegeman at the time, joined CLIR. MINTS and CLIR have coordinated jointly in many countries, mutually recommending each other. CLIR has published some MINTS books, and MINTS has recommended members for CLIR. CLIR as a networking fellowship became known further and further abroad.

The next thing we began, as soon as we had a bit of funding, was the promotion of conferences. Having sunk into semi-liberalism, many churches wanted only “practical” conferences. In this regard CLIR pushed for an alternative, and we began to give theological conferences that started to have an impact on our listeners. Dr. Alonzo Ramírez in Perú, Dr. Peter Jones from California, Dr. Nicodemus Lopes from Brazil, Ludgero Bonilha from Brazil, myself, and others began making an urgent call around the region for the practice of biblical, Reformed theology. The response was overwhelming. CLIR began to receive many more invitations than we could possibly meet. Up to the present this continues to be the case.

Friends in the United States became interested in supporting the publishing effort. Help was given to recondition our garage into a printing facility, more machinery was purchased and shipped, and the CLIR Publishing House began to roll. The Lord brought excellent translators to us who either donated their work or worked for less than half price. CLIR began the work that others had never done: the translation of John Calvin’s commentaries, J. Gresham Machen, Abraham Kuyper, and others. And because of our network with the finest Latin theologians, we began printing Spanish authors as well. Rev. Nicholas Lammé arrived from the United States in 2008 to complete our theological and editing department. Today CLIR has ninety titles in print, besides sixteen uninterrupted years of journals. CLIR always integrates published literature with its conferences, in this way providing a double reinforcement for the topics presented.

In more recent years CLIR has been approached to fill the other need that mission agencies and denominations had neglected: church education material, especially for youth. So we began the translation of the new URC catechism curriculum and have now published one volume in this series, with the other six in process.

As the Lord blessed the CLIR ministry in both publications and conferences, we faced other difficulties. On the one hand God opened doors for the preaching of the gospel in places of great need, but funds lagged behind. First the bombing of the Twin Towers, and then the housing crisis of 2008, threatened to close CLIR. During 2009 the CLIR print shop had to scrape together local jobs, printing invoices and forms to pay salaries. This was a stressful time! The ups and downs of funding “by faith” has often thrown CLIR up and down like a roller coaster. I am thankful for our staff, who have shown perseverant and uncompromising loyalty to this ministry. From our perspective, however, there is so much more we could be doing. The translation of Calvin’s commentaries is a monumental task in itself. And we have many other works, both translations and originals, that we hope to print. The issue of ensuring our funding is always on our mind, and always a concern. We would like to see some sort of planning for the future with a foundation set up, or the encouragement of endowments. Our prayer is that someone will take up this cause to ensure the long-term future of CLIR’s ministry, which is really just getting started. 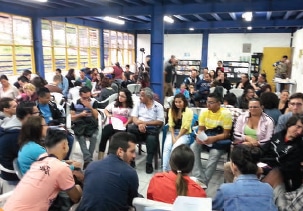 The second problem has been the increasing lack of space for the printing operation. We presently fill the small area that used to be my garage, and printing has become a tedious job of wending our way between one machine or another with reams of paper—going from the paper cutter to the press to the collator to the binding machine to the trimmer to the bookshelves—all the time dodging piles of paper or one machine or another! In order for CLIR to work efficiently we must move the print shop to a more spacious area. We have been working on this possibility, and we pray the Lord to open doors for this to happen.

Fruit for the Reformed Faith

The good news is that a growing number of evangelical pastors have become disenchanted with the emotionalistic versions of Pentecostalism and are searching for their Protestant roots. Many have come to the Reformed faith and are desirous of studying Reformed theology. CLIR was waiting! The Internet has allowed them to find us and has facilitated receiving payment. So every month that goes by, more and more people are asking for literature. Just yesterday I took ten packages to the post office. Each package was going to a different country.

The other good news is that many young people are finding the Reformed faith and expressing a tremendous eagerness to learn. Their enthusiasm has been a great encouragement to us. There is a whole network across Latin America that is coming together, a new generation of young Reformed servants, and we are optimistic about the future of Reformed theology in this region of the world. These young men are found in almost all the countries of the Spanish-speaking Americas and come from a variety of denominational backgrounds. We praise the Lord for this growing movement. We believe that in God’s providence, CLIR has been raised up just for such a time as this. CLIR has become the meeting place for new Reformed believers and the resource center for churches needing solid theological material.

I believe that many Reformed people in the United States and Canada are not aware of the extent of the growth of Reformed churches in Latin America, or the potential that CLIR has in promoting further growth. Doors are open wide in most countries. CLIR is making every effort to take advantage of all forms of media to promote sound doctrine, educational materials, and gospel preaching, from the printed word to audio-visual media to e-books. CLIR has the respect and confidence of huge portions of Latin America.

At present, CLIR’s progress is hampered by struggles to fund two important areas: the translation and publishing projects, and the print shop relocation.

Volunteers have played a key role in CLIR’s ministry. There are those who help from their homes and churches in the United States and Canada in one way or another, and there are others who have traveled to Costa Rica to help in different ways. Each one has played a part in the larger effort of CLIR. For each one we give thanks to the Lord!

If there is interest in further information about our Latin American Fellowship, please contact us at clirprint@gmail.com. And you are welcome to tour our central offices anytime (the Greens’ back yard). Please pray for our feeble efforts on behalf of Christ’s kingdom. Apart from Him we are nothing.

Rev. Bill and Aletha Green have  served the cause of missions for thirty years. They live in Costa Rica, raised their four children there, and have cooperated in planting three churches, founding a Christian grade school and high school, raising up the CLIR Publishing House, as well as other activities inside and outside Costa Rica. Rev. Green is presently the Executive Secretary of the Latin American Fellowship of Reformed Churches (CLIR). Rev. Green has an M.Div. from Westminster Seminary in California, and a Th.M. from Calvin Seminary.