A Chinese evangelist ’employed by the mission organization of a Reformed denomination in China had received his training in a Bible school which was evangelical but not Reformed. A missionary asked to see the textbook which he had used in studying Christian doctrine. Glancing through the pages of Chinese text, the missionary was somewhat surprised to note that Calvinism was listed as one of the heresies that have troubled the Church and must be guarded against! This incident may be considered almost typical of conditions, by and large, among Chinese Christians. Although nearly a century and a half of time has elapsed since Robert Morrison introduced Protestant Christianity to China, real Calvinism has not yet been whole-heartedly propagated in China on any large scale. Most Chinese Christians have never even had a fair opportunity to know what Calvinism is.

During recent years, the missionary body in China has been divided between theological liberals, on the one hand, and fundamentalists or evangelicals on the other. Very few of the missionaries have been real Calvinists, though there have been some. The great majority of the evangelical missionaries have been of Arminian, Lutheran or Anabaptistic faith. In the Chinese churches, distorted views of Christianity have been rampant. Such errors as Arminianism, dispensationalism, perfectionism, anti-ecclesiasticism, and mysticism have been widespread and popular. Fanciful allegorical interpretations of Scripture have been common among Chinese Christians, and are often considered more “spiritual” than expositions based on sober grammatical and historical exegesis.

Liberal missionaries have been giving many Chinese students and young people the notion that orthodoxy has no social message or application of Christianity to life in general. The youth of China have been given the impression that only modernism has a real social application of Christianity. Small wonder that thousands of them, after swallowing this modernist “line,” have climbed on board the Communist bandwagon.

Sometimes missionaries of officially Reformed denominations have entertained the idea that Calvinism is only for Europe and America, while a general evangelicalism is better for China. The result has been what might be expected. Calvinism, while not unknown in China, has not attained a vigorous growth on any large scale. Truly Reformed religious and theological literature has been very meager indeed. In short, China has had only a very slight and inadequate exposure to the Reformed Faith in its pure and consistent form.

The present writer was a missionary in China for about ten years prior to World War II, and during part of that time was a teacher in a Bible school for training evangelists. He noted a readiness on the part of some Chinese Christian students to learn and accept the Reformed Faith. In particular one student by the name of Charles H. Chao showed a very keen interest in Calvinism. Mr. Chao became concerned that basic Reformed literature be translated for his countrymen to read. He began himself, during the war years, by translating The Inspiration of the Scriptures by Dr. Loraine Boettner. This was published in Mukden in 1946.

After the war a Reformed Presbyterian missionary in South China, the Rev. Samuel E. Boyle, also became concerned about the great task of providing Reformed literature in the Chinese language. Providernially coming in touch with Mr. Chao by correspondence, and realizing that Mr. Chao was of like mind with himself, Mr Boyle invited this Chinese Christian to come to Canton, South China, to work with him in translating and publishing Reformed literature. Mr. Chao reached Canton from Shanghai at the end of 1948. At the same time Mr. Boyle asked the present writer to serve as American representative of this translation and publication work, to receive contributions and transmit them to China. Thus was born the Reformation Translation Fellowship. Financially it was very weak. The first contribution was $20.00. But our hopes were high and we believed that God would bless our weak efforts to present his truth more fully and consistently to the people of China.

Mr. Boyle had already translated Dr. J. Gresham Machen’s classic Christianity and Liberalism into Chinese. With the help of Mr. Chao the manuscript was gone over sentence by sentence and word by word, checking it against the English original. A Japanese translation was also used for comparison. Finally Christianity and Liberalism was published in the Chinese language. The reception of this book by Chinese Christians, especially pastors, evangelists and students, far exceeded our expectations. A copy was offered free to any pastor or theological student in China. A second printing was soon called for. Two thousand copies were soon distributed among Chinese Christians, both in China itself and in other countries such as Japan, Malaya, Formosa, Hong Kong, and elsewhere.

Because of the Communist advance in South China, Mr. Boyle and Mr. Chao moved to British Hong Kong, and later to Japan. A reliable young Chinese Christian in Hong Kong was engaged to serve as agent in that colony, where all the Chinese printing of the Fellowship was done. A magazine called The Reformed Faith, in the Chinese language, was published. This periodical reached about 700 readers in China, as well as some hundreds outside of China. Later because of government restrictions in Hong Kong it was necessary to cease publishing the magazine as a magazine, but the same work has been continued by the publication of occasional booklets which are mailed to the readers.

Our publications are mailed from Hong Kong and reach nearly all parts of China without difficulty. God in his providence is still giving us an open door. The Communist pressure on Christians is evidently not equal in all parts of China. A liberal “Christian” weekly published in Shanghai, entitled T’ien Feng (“The Heavenly Wind”), which has become virtually the mouthpiece of the compromising, pro-communist party in the Chinese churches, branded our magazine The Reformed Faith as “reactionary.” At the same time T’ien Feng criticized Dr. Machen’s Christianity and Liberalism as “reactionary.” The result of this attack was that some readers along the coast of China were afraid to receive our publications and wrote asking us to stop sending them. But we are still able to reach hundreds of readers in most parts of China, north, south, east and west, and we know from the letters we receive that our material is reaching them and that it is enthusiastically welcomed.

Our most recent Chinese publication is the first half of The Reformed Doctrine of Predestination, by Loraine Boettner. The second half of this work is now in process and it is hoped that we may publish it this summer. 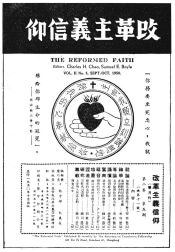 This book, too, is being enthusiastically welcomed by Chinese Christians, especially students, pastors and evangelists.

Besides Mr. Chao, who is working in Japan, the Fellowship has employed two Chinese graduates of Westminster Seminary to carry on translation work while they are in America. Mr. Paul Szto has been translating Dr. C. Van Til’s Introduction to Systematic Theology. Mr. Isaac Jen has been working on short articles and is now taking up Prof. Louis Berkhof’s book Vicarious Atonement Through Christ.

The doctrinal standard of the Fellowship is the Westminster Confession of Faith. The organization is recognized by the Internal Revenue Bureau as a non-profit religious and educational organization, so that contributions to it are deductible for income tax purposes. The work is supported by voluntary contributions of individuals and churches. During 1951 approximately $3550.00 was received and disbursed. A financial report is sent annually to all donors.

Although originally formed by members of the Reformed Presbyterian Church, the Reformation Translation Fellowship is in no sense a denominational undertaking. It is a Kingdom enterprise and welcomes the interest, co-operation and support of all lovers of the Reformed Faith. The Fellowship is not trying to do the work of the Church but to perform a special service which will be a help to all truly Reformed churches. We are trying to counteract the vague Biblicism and erroneous tendencies of Chinese Christianity by providing the solid, satisfying truth of the Reformed Faith, which we believe to be Biblical Christianity in its purest and most consistent form.

A booklet and newsletter concerning the work of the RTF will gladly be sent on request. Address correspondence to (Rev.) J. G. Vos, R.F.D. 1, Clay Center, Kansas. 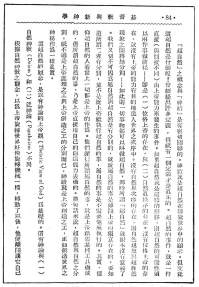