The Capital city of the world, Scripture reveals, is not on earth but in heaven. “I saw, and behold, a door opened in heaven…and behold, there was a throne set in heaven, and one sitting upon the throne; and he that sat was to look upon like a jasper and a sardius” (Rev. 4:1, 2, 3a). Before we hear the thunders and lightnings and trumpets and voices of the Apocalypse we are told that these are all the result of royal decree. Behind all things in history is the One on the throne, whom John does not bother to identify since he knows Him whom to know is to know the Father also.

John keeps things straight:, and so he tells us that we ought to be concerned with this question: From his vantage point in heaven what does God see? The answer might be most anything, and if the world is under the rule of God everything has its place and its importance, right down to the tears of the saints (Rev. 7:17; 21:4). But what does God always see as majestically he surveys all things from heaven’s throne?

The answer is: an iris, a “rainbow,” deep green in color. This encircles the throne. 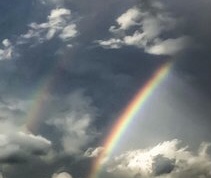 What is the significance of the rainbow? The Bible says, “I set my bow in the cloud and it shall be a sign of the Covenant between me and the earth. When I bring clouds over the earth and the bow is seen in the clouds, I will remember my covenant…” (Gen. 9: 13, 14, 15a, RSV). When Cod looks upon the rainbow he is reminded of his covenant. And the unusual thing is that the keeping of this covenant (“never again shall there be a flood to destroy the earth”) is in no wise dependent upon man’s obedience, but only upon God’s faithfulness!

The history that leads to the glorious consummation of that great Day when Christ shall return will not be interrupted by another catastrophe like the one in the days of Noah. The work area erected in Genesis 1 was so littered with the filth and dirt of sin that the Lord was sorry that he had made man on the earth. He decided to wash it clean by the Great Flood, and to make a new beginning, and he did. But that was the one and only kind of catastrophic interruption which the world’s history record—the next time universal catastrophe strikes it will be the final end of this world.

From Revelation 5:6 we note that the book of his royal decrees is laid in the hand of the Lamb. He has authority to open the book, and he has the power and the love to an awful history that the struggle of church and world must go. He has the love: “standing as it had been slain,” the Lamb reveals that he is willing to carry out the Father’s plan for the redemption of world and belivers to the very end.

Throughout 1963 that heavenly throne will stand undisturbed. But is Occupant will hear the intercessions of the Lamb and the Spirit and the saints in heaven and on earth, and looking upon the keep green bow which encircles his throne, he will remember to preserve the work area of this world in order that the day may quickly com in which it will become the re-newed, cleansed work area of the Church alone!

“Hence, when the world is enkindling the flames of hatred and slaughter and when the earth is drenched with blood, may our tear-dimmed eye catch a vision of The Throne which rules the universe. In the midst of trial and tribulations may our gaze be riveted upon the One who is King of kings and Lord of lords” (W. Hendriksen, More Than Conquerors, p. 100)