This is the Forward by Sinclair Ferguson for the newly published book of Dr. Comelis P. Venema. 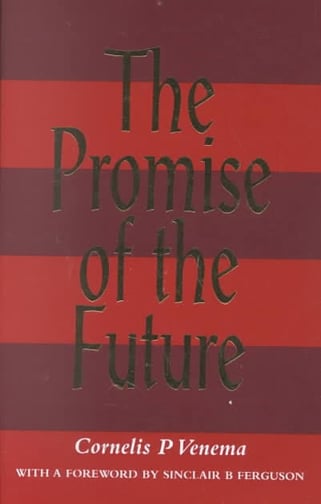 It is a pleasure to introduce Comelis Venema’s exceptional book, The Promise of the Future. Dr Venema is Professor Doctrinal Studies at MidAmerica Reformed Seminary. For some time now his acumen as a theologian and skill as a teacher and author have been recognized and deeply appreciated in the circles in which he has been known in the United States. I hope that the publication of The Promise of the Future will bring his work to the attention of a wider public on both sides of the Atlantic (and, indeed, the Pacific!). It is a model of what systematic theological exposition should be.

Doctrinal or (as it is frequently called) Systematic Theology has fallen into disfavor in the modern age, and also into a kind of self-created decline. Much that is taught in universities and seminaries under this heading is now little more than the study of the religious opinions of scholars. The views of various theologians are clarified, compared, contrasted and critiqued. While this is a legitimate enough exercise in itself,· its net effect has been that Systematic Theology is no longer viewed as a systematic presentation of what divine revelation teaches on any given subject. Rather it has become a kind of religious anthropology. The vision is downwards, sideways and inwards. To tinker a little with the well-known Latin proverb, the voice of the theologians is the voice of God. The voice of God in Scripture has come to be treated with skepticism, even with disdain; allusions to it (often by those who are most critical of “proof-text” theology) have been little more than occasional proof texts which buttress views held on other grounds.

In this atmosphere, charged as it is with a kind of theological carbon monoxide poisoning. Comelis Venema’s work can be safely inhaled. It provides us with a healthy injection of doctrinal oxygen. He stands in the august tradition of biblical theologians like Herman Bavinck, Geerhardus Vos and John Murray who, with John Calvin and Johannes Cocceius in an earlier age, sought to quarry doctrine from the rich and varied seams of biblical revelation.

The Promise of the Future is thus the fruit of long and patient study of the Bible. That is why it is such a satisfying, unfrustrating book for a Christian to read. In its pages the voice of God is not muffled by the philosophies of man but allowed to speak for itself. Here the reader will find that there is always the solid ground of Scripture under his or her feet.

This does not mean that Dr. Venema ignores the history of theology or is not well abreast of intellectual developments. Those more familiar with historical theology will recognize his sensitivity to the Christian tradition in the whole warp and woof of the tapestry of instruction he has woven here. In this respect, his foot-notes are but the tip of the iceberg.

The Promise of the Future introduces us to the full range of biblical teaching on eschatology (the study of the last things). It rightly stresses that in Scripture the eschatological dimension is never relegated to “the end.” Rather, from the beginning God’s purposes have had an eschatological perspective. Moreover, as Simon Peter pointed out on the Day of Pentecost, the resurrection of Christ and the gift of the Spirit mean that the future has invaded the present, so that we are already living in “the last days.” This helps to explain the sense of thrill and vibrancy that characterized the first Christian disciples. They realized that the new, longawaited age of God’s kingdom had already dawned in the advent of the Lord Jesus Christ.

Dr. Venema’s fine study is both comprehensive and careful. He is thoroughly biblical; he is also honest and fair in dealing with the variety of eschatological positions that are current in the Christian church. He does not shrink from tackling the hard questions which arise. Nor is he intimidated by the heavy artillery behind some of the views which he believes to be unbiblical. Furthermore, his commitment to serve the church, coupled with his background in pastoral ministry, guarantee that his exposition even of complex issues is expressed in a way that the average Christian should be able to follow. For these reasons and others, I believe that you will find [Venema’s] study…both intellectually satisfying and spiritually enriching. It will certainly inform you; more than that it will help you to sense what a glorious thing it is to be a Christian.

For this, above all, I believe you will share my gratitude to Comelis Venema for the labor of love for Christ’s people which this book represents.