That this is a rather common approach can be seen in many current books dealing with this period. A good example is the Viking Portable A Renaissance Reader, in which the Reformation writers are presented as part of the Renaissance scene. In like manner much of the sixteenth century Protestant political writing and art are taken as being fundamentally Renaissance in spirit and outlook.

If one is to agree with this point of view he must then admit that the true genius of Protestantism is humanistic rationalism, that Protestantism is fundamentally the product of man’s own spirit. Many who label themselves Protestants would perhaps accept this assumption, while it would undoubtedly find unanimous support in Roman Catholic circles. It would seem important, therefore, for Protestants to see if this is the case. Was the Reformation merely a baptized Renaissance, or was there a fundamental difference between the two? Only when one grasps the answer to this question can he appreciate what should be the true Protestant position in our twentieth century world.

In one thing, there is little doubt, both the Renaissance and Reformation were in agreement. They both disliked the Middle Ages, particularly the rather dry and arid mental gymnastics of the late scholastic thinkers. They both felt that the medieval philosophers had become so separated from life that they had actually little to say to the living world. 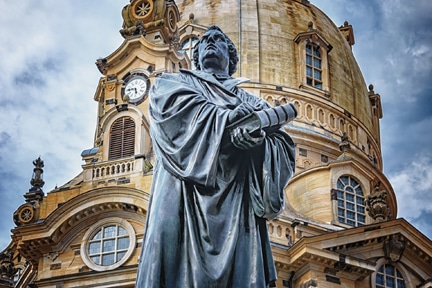 Yet the Renaissance, for all its antipathy to dry-as-dust scholasticism, was still strongly impregnated with medieval views and attitudes. This was only natural since the early Renaissance thinkers, such as Petrarch, Giotto, Boccaccio, had come out of a medieval environment which was never completely repudiated. Indeed, their continual lip service, if it is nothing more, to the doctrines and practices of the Roman Church indicates that they never ceased to be strongly influenced by the Middle Ages.

The humanists’ close link with the thought of the preceding five centuries comes out most clearly in the continued Renaissance emphasis upon the two poles of nature and grace. Thomas Aquinas had held that although by reason man could truly know things mundance, only by revelation could he grasp the meaning of those truths which were heavenly. Although accepting this medieval dichotomy of reality, the Renaissance reversed the order of importance, making grace and revelation secondary and placing their great emphasis upon the fuIl life here and now, whose only foundation was nature and reason.

The Renaissance “nature,” however, was not the same as that of the twentieth century. The highest form of nature, its very pinnacle, was man, who was a “little world,” or microcosm, of the universe. Nature in its broadest sense, therefore, was important only as a background for human activity. Petrarch, looking from Mount Ventoux, recalled to mind his duties and sins, Pico de Ia Mirandolla praised man as the heart of creation, and Descartes made his own existence the starting point of a scientific system of philosophy. This was Renaissance humanism.

Yet, while such humanism was common, it was not applied to the “common” man. Man in the mass was regarded with some dislike and distrust. Only the individuals who made up the elite wore of any real importance. The “genius” or “virtuoso” displayed his abilities to an astonished world, made history, and ruled the destinies of the nations. He ‘“bestrode the world like a colossus,” while lesser men sought their graves about his feet. To this point of view Castiglione’s Courtier, Machiavelli’s Prince, and the Spanish picaresque novels, such as Don Guzman de Alfarache, all bear abundant witness.

The virtuoso appears as the man of great artistic gifts and iron will who, striding through the world as an amoral superman, achieves his own rationally devised objectives. Although a Machiavelli or a Benvenuto Cellini or a Cesare Borgia all conformed to the external requirements of the medieval church ceremonies, they governed their lives not by any of its moral precepts but only by what they considered to be their own needs and wishes. Even the gentle Erasmus felt that in the final analysis man’s will and self-determination were absolute. The individual genius, sovereign in his own rights, was the model and ultimate objective of the Renaissance thinker.

This was new wine in old bottles. God was seldom denied or rejected. Rather he was regarded as irrelevant except in cases of sickness or death. The important thing was the knowledge of the ancient classics of art and literature, that on them man might model not only his life, but, what was even more important, his oratorical, artistic and literary styles. It was only when this was achieved that the genius could really show himself to be a true man of the world.

The consequence of such an outlook shows itself in the era’s economic, political and social history. It was a time of merchant princes, tyrants and despots alongside the numerous depressed lower classes. The Renaissance meant for the upper classes, elegance, beauty and refinement, but at the same time for the “common” man frequently oppression, exploitation and misery. When one turns to the Reformation, he finds a different state of affairs. In on e sense the Reformation was much more depressing, for it began with a deep sense of sin. Long before the sixteenth century appeared on the scene, men had been turning away from the medieval church’s teachings to the Scriptures of the Old and New Testament in order to find a word of forgiveness through Jesus Christ. Luther only fired the fuse already laid. As a result of the ensuing explosion men returned to the New Testament doctrine of God’s sovereignty, which destroyed the authority of both the medieval church and the virtuosity of the genius.

Of a kind different from that of the Renaissance, there now appeared a new individualism. It was new in that it applied to all men equally, for all equally stood in the need of grace. Moreover, it was a moral individualism which stood under the judgment and love of God, so that man was faced with the responsibility of serving God in life’s every task no matter how apparently unimportant or insignificant. Economics, politics, society, art and science were all to be brought under the divine nile, that they might manifest the glory, not of the genius, nor even of the church, but of the sovereign God.

This new attitude brought with it also a changed outlook on nature. In the writings of Jerome Zanchius, one of Calvin’s disciples, there is the deep consciousness that nature, an of it, is God’s creation and possession. The true knowledge of nature, therefore, presupposes the true knowledge of God through faith in Jesus Christ. Only the believer can see nature in its proper setting, the setting of the will and glory of God. He alone truly understands how this nature and its fruits are to be employed in God’s service.

The practical consequences of such an interpretation of life upon this planet had certain concrete results. While at its center lay an insistence upon Christian faith, there was the conviction that all things had to be for the glory of God. The effect of this interpretation upon science, politics, society and art was very great. Space forbids an attempt to show the results in detail. One may, however, see something of the Reformation’s influence by comparing the countries in which it predominated with those which remained under the medieval-renaissance philosophy of life. The resulting differences endure down to the present time, demonstrating clearly the important historic role of the Protestant Reformers.

One cannot adopt the attitude, however, that the Renaissance and the Reformation were phenomena which came into existence in separate, water-tight compartments. Although there was a deep and abiding difference between them, they exercised upon each other strong influences. The Renaissance in particular. since it reached its height some fifty years before Luther’s attack on indulgences, helped to prepare the way for the religious revolution which was to follow.

For one thing, the Renaissance helped to undermine the medieval church’s foundations. Not only did its incipient paganism help to cause an ecclesiastical deterioration, but the literary and historical studies of such people as Lorenzo Valla by disproving many of the historical claims of the papacy and of the church brought it into disrepute, thus destroying some of its prestige. Likewise, by establishing canons of scholarship, and by emphasizing the individual’s freedom, it laid a foundation for the work of Luther. Calvin, Knox, Cranmer and the others. Yet with all this, as can be seen in the debate between Luther and Erasmus over the bondage of the human will, it was not really sympathetic to the Reformation.

The Reformation, because of its fundamental disagreement with the Renaissance, did not accept without question its inheritance, but molded it to suit its own purposes. With a fundamentally different approach it gave such terms as “nature,” “the individual,” and “scholarship” a new content. Consequently even when apparently adopting much of the Renaissance’s knowledge and philosophy, it was in truth really adapting and changing it to suit its own needs and objectives,

The outcome of this was that, while there were at times seeming similarities, an apparent crossing of the border line between the two movements, their actual differences were always very great. In fact, at times they were even in violent conflict with each other, for one was a man-centered and the other a God-centered system of thought. Although most of the Renaissance thinkers would acknowledge the existence of God, when it came right down to ultimate issues their final authority was man and man’s reason. The Reformers alone clung tenaciously to the principal of “soli Deo gloria.”

In western thought this conflict has continued down to the present time. The medieval attempt to link together nature and grace as two independent coordinate areas of existence failed, so that men had to choose which partner would dominate. Equality was impossible. During the past four centuries and a half the battle has continued, with humanism gradually taking over even in the Protestant churches with the upstage of modernism. Thus, even today we are faced with the same conflict which beset our forefathers.

In the present hour, therefore, we have to make a decision much the same as that which confronted the sixteenth century Reformers. Will we accept the judgments of rationalistic humanism as the basis of our faith; or will we hold to the historic, supernaturalistic, biblical position? Upon the contemporary church’s answer to these questions depends not only its own, but perhaps also the western world’s future.