It was an ideal church. After a thorough investigation in order to choose the best location, the building committee had finally decided on a prominent corner in a rapidly growing community. l1lis same committee had also worked tirelessly to erect a beautiful, though not extravagant, edifice which would serve all the needs of the congregation. The consistory, knowing that the structure was only the means to the end, was faithful in seeing that the true doctrine was preached from the pulpit. The pastor labored conscientiously to proclaim the whole counsel of God in an interesting and fervent manner. The evangelization committee had conducted a systematic canvass of the area, with enthusiastic support from many members.

As a result. one Sabbath morning Mr. and Mrs. Pinanski ventured into the church for the morning service, which had been changed from the customary hour of 9:30 to 11:00 in order to appeal to the community. As it happened, the sanctuary was quite full when they entered, and they had to be seated on folding chairs in the aisle. The ushers, in the confusion, had neglected to give them hymnals. So during the singing of the Psalms and hymns—all of which were unfamiliar to them—they had to stand in awkward silence. No one thought of passing them a book or even sharing one with them.

At the conclusion of the service, which they enjoyed even though many aspects were strange to them, they turned to smile at the people to their right. However, their neighbors were already busily engaged in conversation with their friends in the row behind them. The Pinanskis, a friendly though not aggressive couple, then turned to their neighbors on the left. Again they met with backs.

Feeling a bit forlorn at this point, they silently filed out past the minister. He greeted ·them cordially and remarked that they must be new; but they could not stop to talk with him because of the line pressing from behind. Outside, the story was repeated. The worshippers had begun to gather in little groups here and there and seemed to be enjoying each other’s fellowship. But no one even turned to notice the Pinanskis. By this time, they were beginning to feeI about as useful as a funeral director at a wedding reception. Nevertheless, they stood there courageously for a little while longer, leaving themselves open to a friendly gesture or word. But since none was forthcoming, they reluctantly started down the street to their home two blocks away.

Exaggerated? Perhaps, in some cases; and in others, perhaps not.

And the outcome as far as the Pinanskis are concerned? You give the answer. Would you feel like going again to such a church, especially if you were not even a Christian and so could not appreciate the thoroughly Reformed preaching? If you were a believer and happened into an orthodox church, you might put up with all kinds of inconveniences and unfriendliness for the joy of hearing the Word proclaimed. But if you were yet to be won to the faith, you could just as easily be turned away by such unfriendliness. If strangers never return because they are not made to feel at home, the church can make no impact upon the community. Then all the good efforts expended for a choice location, an attractive building, sound preaching, and a community canvass are for nought in extending the church’s influence.

What are some of the causes of unfriendliness, which all too frequently has adverse effects on our out· reach into the communities where we are situated?

Perhaps foremost is thoughtlessness. As in the case of the Pinanskis, their neighbors to the right were undoubtedly neither hostile nor haughty. But they so quickly became involved in conversation with their friends in the row behind that they were simply unaware that a visiting couple was standing by ignored. Perhaps they had not seen those friends since the previous Sunday, and there was so much to catch up on! Yet their friends would certainly have waited a few minutes while they showed a little interest in the Pinanskis. 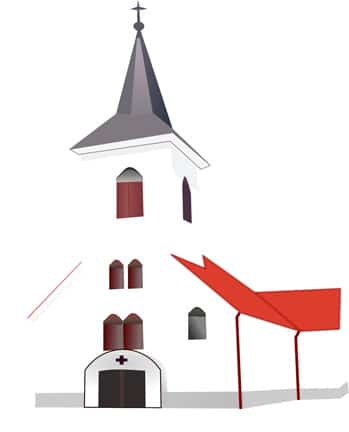 The others, to the Pinanskis’ left, perhaps had noticed the new couple. Maybe they had even thought to themselves: “How nice to have strangers in the church! I wonder if they were contacted during the canvass.” Yet they thoughtlessly did not put themselves in the place of the Pinanskis. Having always attended the same church where they knew just about everyone and felt very much at home, they did not try to imagine how strange everything must be for this new couple: the building itself, a different order of worship, unfamiliar Psalms, a new type of preaching—and all the other worshippers unknown to them. They did not realize how far a smile or a few words would go in putting these people at case.

A second reason for apparent unfriendliness is the embarrassment at meeting someone new. Undoubtedly there were others in the congregation that morning who saw the Pinanskis and who actually thought that they should go up and speak to them. But then, they did not quite how how to start. They were afraid they would not find any common ground for conversation. They thought they themselves would feel awkward if the new couple did not respond to their advances. So they took the easier and more comfortable course of seeking out their old friends rather than putting forth the effort to make the acquaintance of the Pinanskis.

But as with so many things that are difficult, the more you do them the easier they become. Someone who takes up a golf club and tries to knock the ball off the tee for the first time probably looks, and feels, very awkward and foolish—especially if he misses. But the more he tries, the more he succeeds, and the more confident he becomes.

In a similar fashion, with regard to meeting strangers, although in the beginning it may be a difficult and awkward thing to do, after a little practice it will become easier and even enjoyable. If every church member would develop an awareness of his own, not one visitor could slip out of the church unnoticed. If each member would speak to only one new person at each service, the results would be overwhelming. Not only would no visitor be ignored, but I dare say many members of the congregation would become acquainted with each other for the first time. Someone once asked an elderly couple if they were new in the church. A horrified elder, standing by, promptly introduced them as members of some fifty years’ standing. Needless to say, that person was embarrassed, but recovered with the remark that if that was the case, it was high time she met them! Perhaps a safer introductory remark would be, “I don’t believe I have met you,” or “My name is…”

The conversation should not be dropped with a mere introduction, however, but continued if possible. The more one finds out about where a person comes from, what his job is, how many children he has, etc., the more interest he will have in him and the more easily he will be able to remember his name and face. If some of that information is written down on arrival home and even looked over before the next Sunday, it will be a simple yet satisfying experience to speak again to the same person. And how warmed that newcomer will feel, too, to know that someone cared that much about him to remember who he was! And finally, the visitor should never be left until he has been introduced to someone else who can carryon. And if that second person never leaves the stranger until he has introduced him to still another person, and so forth, he will have had a warm and pleasant reception.

Perhaps it is difficult to get the church as a whole to engage in this kind of “missionary” activity. Sometimes all it takes is just a dozen or so alert members who make a point of scanning the departing worshippers before they say a word to their friends. (If you stop to talk to your friends first, the visitors have left!) It could be the consistory, or a half-dozen each from the ladies’ and men’s societies. But the make-up of this group should not be left to chance or impulse. A committee could be appointed which would make this matter its special concern. It would be their responsibility to see that every visitor was welcomed. And as a matter of fact, their interest and activity along this line would soon spread to other members of the congregation. Their own wives or husbands and their close friends, for example, would be drawn into the conversations, and soon they, too, would be taking the initiative themselves.

But is this really so important? What difference does it make if a visitor stands around neglected and awkward? To put it very strongly, it may make a difference between heaven and hell. For a coldness on the part of the church members can throw up a wall around the church, and around the message it proclaims. We know that no one can believe on Christ unless he hears the Word. And if something as seemingly trivial as a lack of friendliness stands in the way of others’ coming and hearing, it is not trivial. We know that not every unbeliever who is made to feel at home in a Bible-believing church is converted. But we know also that unless an unbeliever comes regularly to a Bible-preaching church, his chances for conversion are considerably smaller. And it is not likely that he will come regularly, or even a second time, if he is not made to feel welcome.

Many of us are reticent about speaking to others about the faith that is in us. We feel that we fail miserably in spreading the Gospel by our own lips. But if, at least, we do our part in welcoming strangers into a church where they will hear that very Gospel from the pulpit, we will have done something—not all we should do—but something.