In Jeremiah 32, God says, “I am Jehovah, the God of all mankind. Is anything too hard for Me?” In this verse, the fact of God’s almighty power is stated in the form of a challenge. We are asked to see if there is anything we can find that God cannot do. Certainly there are things God cannot do. He cannot do anything that is inconsistent with His nature. For example: God cannot lie; He cannot deny Himself; He cannot go back on His promises. In the Old Testament, God makes various promises and in many of those promises God swears an oath by His own name that He will keep those promises. If God were to go back on those promises, He would no longer be God. He cannot and will not go back on His word.

It does not take very long before you realize that there are certain things that are just impossible for us to do as human beings. When we are in our teens we think that we are invincible. Nothing is going to get in our way as we attempt to conquer the world around us. By the time we hit forty or fifty, we begin to realize how limited we are. Work in the garden takes longer to accomplish, cleaning the garage used to be easier. Let’s face it, as we get older we have to admit that it takes us twice as long to do the things we used to do in half the time.

When we approach God’s throne, however, we come into the presence of a God who is omnipotent. His power has no limit.

The first thing that we confess in the Apostles’ Creed is that God the Father Almighty is the Maker of heaven and earth. That means that the eternal Father of our Lord Jesus Christ created out of nothing the heavens and the earth and everything that is in them. The prophet Jeremiah writes: “God made the earth by His power. He founded the world by His wisdom and stretched out the heavens by His understanding” (Jeremiah 10:12).

If we are willing to admit that our God has infinite power, that He is almighty and omnipotent, able to create out of nothing this vast universe and all that it contains, as the Bible teaches; then all this talk about evolution and the earth being billions of years old is really nothing more than a bunch of nonsense. They are nothing more than foolish thoughts by foolish people who really do not understand God nor His power.

God could also have taken six seconds to make all things, if He had wanted to create in that way. For that matter, God could have created everything just five minutes ago and implanted the idea into our minds that I wrote this article and that you have read it thus far. And there are some philosophers that believe that to be true. How can you prove them wrong? God could have done it that way if He had wanted to do it that way. The power certainly is His.

Not only did God create the heavens and the earth, but q/a 26 of the Heidelberg Catechism teaches us that He “still upholds them and rules them by His eternal counsel and providence.” Not only is the power of creation a marvelous display of God’s almighty power, but so is the power necessary to hold all of this creation together. The Book of Hebrews reminds us that God “sustains all things by His powerful word.”

Everything is in God’s hands. Lord’s Day 10 of the Catechism reminds us that “The almighty and everywhere present God upholds the heaven, earth, and all creatures, and so governs them that herbs and grass, rain and drought, fruitful and barren years, food and drink, health and sickness, riches and poverty, yea, all things, come not by chance but by His fatherly hand.” This Lord’s Day is explained elsewhere in this issue by Rev. Hyde in his article on the Belgic Confession.

As we look at this planet and see the beauty of nature we must recognize that this is only one tiny planet of the nine in our solar system. Only one planet of the millions that must exist with the millions of stars in the galaxies. And God holds them all in His wisdom and His power. As you look under the microscope at the tiniest of cells you also see His wisdom and power.

In addition, nothing can so much as move without His express will. In the providence of God, all things remain under His complete control. We cannot even lift this issue of The Outlook without it being God’s will.

Everyday, God’s power in creation and providence shout out as to the incredible power of God. So much so, that Paul writes in Romans 1 that those who want to deny God need just look at nature. All their theories about evolution and chance are ludicrous and they are left without excuse.

The almighty power of God has been demonstrated for us over and over again in the Bible. Moses and the Israelites had this power revealed to them time and time again. God delivered them from the bonds of Egypt, He fed them daily in the wilderness, and brought them into the promised land. Moses exclaimed: “O sovereign Lord, you have begun to show your greatness and your strong hand. For what God is there in heaven and on earth who can do the deeds and mighty works you do?” (Deuteronomy 3:24). 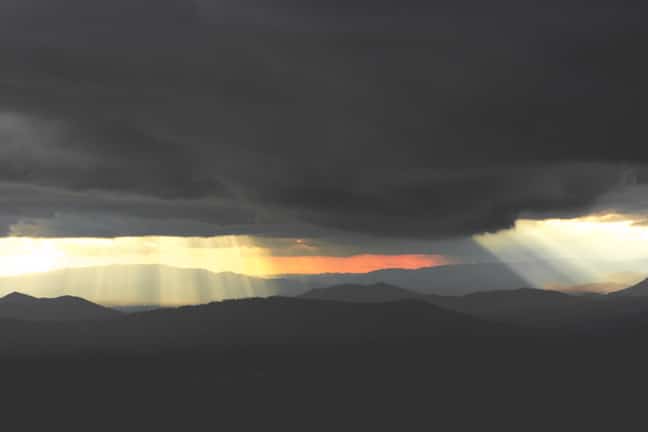 We have witnessed God’s power in a way far greater than the Israelites could ever have dreamed. The greatest evidence of the omnipotent power of God is displayed in the raising of Jesus Christ from the dead. Through His resurrection there is victory over death, hell, Satan, and sin. It is the power and the victory that brings to us the forgiveness of our sins.

God has made His power available to all those who believe in His Son. This power will not only save you from destruction; it will not only turn all things to your good; it will not only free you from bondage to Satan, but it will keep you free! Peter writes in his first epistle: “Through faith we are shielded by God’s power.”

You may be saved today, but what about tomorrow? Is there a way that you can lose your salvation? That is not what the Bible teaches! We have a blessed Savior who not only saves us, but, by His omnipotent power He keeps us saved! What a great comfort that should be to us. We are kept safe not by our own power, but by the power of the Almighty God.

A year ago, we committed my father’s body to the grave. We took his body and put it in a hole in the ground. That sounds morbid and horrible. I am certain that many who read this article have done the same with their loved ones. We rest assured, however, that those bodies will not stay in the ground. Paul writes, “By His power God raised the Lord from the dead and He will raise us also” (I Corinthians 6:14).

That is God’s promise to all those who believe in Jesus Christ and God is faithful to His promises or He would not be God. That our mortal bodies could become immortal and that our sinful selves could be made holy requires an omnipotent power. We need the Almighty God to make us holy! The God who has the power to create our bodies from the dust of the earth has the power to recreate them into new and perfect bodies that will join Him in glory.

When God makes a promise, whether it is to uphold the earth in His providential care; or to forgive our sins through His Son; or to keep us safe, you can know that His promise will be fulfilled because He is the Almighty God.