Jehovah’s power over the gods of Egypt had been clearly displayed up to this point. Yet it was important that the plague of darkness be reserved as the final note of judgment before the sound of death. Throughout the Scriptures, darkness is associated with judgment and the Day of the Lord.

The ancient Egyptians regarded Amon-Ra to be the personification of the sun. The sun god was their chief deity. They considered Amon-Ra to be the creator-god. His rising in the east was the symbol of life. When Amon-Ra sank in the west, it was understood to represent death and the underworld.

It should have been clear that when Jehovah darkened the sun, He had overpowered Amon-Ra. By means of the ninth plague, it is clear that Jehovah was sovereign over Egypt’s most powerful God, Amon-Ra. By implication, therefore, Jehovah was sovereign over life and death. During the ninth plague Amon-Ra did not rise over Egypt; he did not give light and life. He was confined to the realm of death and judgment. It only makes sense that the tenth plague, the plague of death, would follow the darkness that was associated with death and judgment. 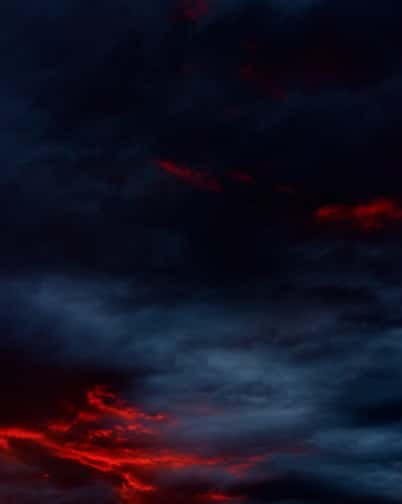 The first thing that we notice about the darkness associated with the ninth plague is the supernatural character of this darkness. It is not uncommon for Bible commentators to try to explain the ninth plague through some type of natural means, such as a sandstorm. There is no justification for such an explanation. For example, in regard to the eighth plague, the Biblical author tells us that God used a wind to deliver the locusts. We are also told that the Lord changed the direction of the wind to remove the locusts from Egypt. The means associated with the eighth plague demonstrates God’s sovereignty over the wind, but in regard to the ninth plague there is no mention of means. Therefore, we should be careful about speculating how God darkened the sky, unless there is Biblical warrant for doing so.

The darkness in Egypt was so intense that it could be felt. It put an end to all activity in Egypt for three days. Three days was sometimes used in the Old Testament to symbolize completeness and finality. In the case of the ninth plague, it indicated the final defeat of Amon-Ra and the other gods of Egypt. Unlike and then rose to life again, Amon-Ra was powerless. He remained dead; he had been overcome by Jehovah.

During this plague, a distinction was being made between the Egyptians and the Hebrews. God’s people had light, and Pharaoh’s people were in total darkness. Egyptians had no reprieve from the darkness. They were unable to light lamps or candles, whereas the Hebrews had light.

For three days the Egyptians saw no one: “No one could see anyone else or leave his place for three days. Yet all the Israelites had light in the places where they lived.” The Hebrews could light lamps and candles, but the Egyptians could not. This fact drives home the point that Jehovah is the author of light, not Ra. Apart from Jehovah there is no light. In addition to this, Jehovah will give light to those whom He wills, and likewise He will withhold His light from those that he wills.

Judgment and a New Creation

In the Bible, darkness was either associated with judgment or the pre-creation state of darkness and chaos. Both of these meanings are present in Exodus 10. The exodus was a picture of God’s judgment, but it was also a picture of God’s reversal of the creation order. Jehovah had uncreated Egypt, causing Egypt to return to a semi, pre-creation state. In the exodus, Jehovah was the great judge. Jehovah had the ability to save His people. In conjunction with His saving activity, the salvation theme merged with the re-creation theme.

The language of creation was applied to Israel, but, likewise, the pre-creation state of darkness was applied to Egypt. Egypt was becoming uncreated, a place of chaos and death, just like the earth before there was light. In contrast, Israel represented the new creation. Throughout the Bible, Israel was used as a shadow of the heavenly creation, the new heavens and the new earth, and the new Jerusalem. The earthly city of God was a shadow of the heavenly city. This applied to the land, the temple, the monarchy, and the people.

The Day of the Lord

God’s special presence is associated with both with His judgment and His salvation. He is present both to judge and to save. This is the way that the Biblical authors describe the Day of the Lord. “Woe to you who long for the day of the LORD! Why do you long for the day of the LORD? That day will be darkness, not light. ‘In that day,’ declares the Sovereign LORD, ‘I will make the sun go down at noon and darken the earth in broad daylight’” (Amos 8:8-9). Amos warned the nation of Israel that the Day of the Lord would be different from what they had thought. They assumed that they would be saved because they were children of Abraham. However, they are told that if they continued in unbelief, the day of the Lord would be a day of judgment instead of a day of salvation.

In the book of Revelation, John describes the day of the Lord as a Day of Judgment for the beast and everyone associated with his kingdom. “The fifth angel poured out his bowl on the throne of the beast, and his kingdom was plunged into darkness. Men gnawed their tongues in agony and cursed the God of heaven because of their pains and their sores, but they refused to repent of what they had done” (Revelation 16:10, 11).

The Day of the Lord is a day of salvation. It is also a day of intense darkness. At the end of this age, the kingdom of the beast will be thrown into darkness and misery. The misery will be so great that the members of this kingdom will gnaw their tongues in agony. Just as God made a distinction between night and day and between Egypt and Israel, God continues to make the same distinction between the two seeds, between the seed of Satan and the seed of the woman (Gen. 3:15), between darkness and light.

In first Samuel we read, “He will guard the feet of his saints, but the wicked will be silenced in darkness. “It is not by strength that one prevails” (1 Samuel 2:9). Second Samuel says, “You are my lamp, O LORD; the LORD turns my darkness into light” (2 Samuel 22:29). The psalmist comments on this same theme. “You, O LORD, keep my lamp burning; my God turns my darkness into light” (Psalm 18:28). “Even in darkness light dawns for the upright, for the gracious and compassionate and righteous man” (Psalm 112:4).

The spiritual principle of God’s light shining in the darkness for His people is illustrated in Exodus 10 in a literal way. The Hebrews had light in their homes while the Egyptians lived in total darkness. Just as God provided light for the Hebrews, when they lived in the midst of darkness, God has provided light for His people even now. The light that God provides His people is a spiritual light, it is the light of His Word and His presence.

In the book of Ecclesiastes, the author compares God’s wisdom to light and folly to darkness. “I saw that wisdom is better than folly, just as light is better than darkness. The wise man has eyes in his head, while the fool walks in the darkness” (Ecclesiastes 2:14).

The apostle Paul wrote “So I tell you this, and insist on it in the Lord, that you must no longer live as the Gentiles do, in the futility of their thinking. They are darkened in their understanding and separated from the life of God because of the ignorance that is in them due to the hardening of their hearts” (Eph. 4:17–18). If this were not explicit enough, Paul goes on to teach, “For you were once darkness, but now you are light in the Lord. Live as children of light (for the fruit of the light consists in all goodness, righteousness and truth) and find out what pleases the Lord. Have nothing to do with the fruitless deeds of darkness, but rather expose them” (Eph. 5:8–11).

Paul writes that the ungodly are darkened in their understanding. They live in folly and ignorance. They lack the basic elements of wisdom, faith, and the fear of the Lord. But everyone that belongs to Christ is in the light. Paul’s logic for living an obedient life is based on your relationship with the light of Christ. Because you belong to Christ you are in the light. Since you are in the light you should put off those things that are associated with the darkness, like sexual impurity, greed, obscenity, foolish talk or coarse joking, which are out of place; rather you should put on thanksgiving. In other words, live according to who you are in Christ. “For you were once darkness, but now you are light in the Lord. Live as children of light.”

Just as the Hebrews enjoyed the light of God in their homes, likewise you enjoy the light of God through your fellowship with Christ. If you believe, then you have been spiritually united to Jesus Christ, the first fruits of the New Creation. The nation of Israel was a picture of the new creation, the heavenly creation, but you are a member of heaven if your are a member of Jesus Christ. Just as the light of God illuminated the Hebrew homes, the light of Christ has illuminated your mind and heart, causing you to see your sin and to turn from your evil ways. This process is incomplete, in this age, but this is no excuse for slothfulness. You should strive to live in obedience to Christ and you should actively reject that which is associated with darkness. If you have come to faith, then you are obligated to walk in the light of Christ, because your life is hidden in Christ.