Much has been written and perhaps more will be written about the thought-provoking article by Dr. James Daane in the Reformed Journal of September, 1957, on “The State of Theology in the Church.”

We wish to reflect in this article on just one phase—an important one of the argumentation of Dr. Daane. We have in mind his contention that we should make the Lordship of Christ instead of the sovereignty of God the central doctrine of our theology. This means, as we see it, that Dr. Daane wants to begin in the middle instead of at the beginning: with Christ the Mediator, not with the triune God. In our judgment this is the Barthian rather than the Reformed approach.

Even a novice in matters of doctrine can see that there are many themes which logically precede that of the Lordship of Christ. To be sure, the latter is one of the great themes of the New Testament, witness the fact, for example, that the New Testament speaks far more often about the “Lord Jesus Christ” or Jesus as Lord, than about him as Savior. (See “A False Gospel” and “The Meaning of the Lordship of Christ” The Banner, 1929, pp. 76, 77.) But we must add at once that the idea of Saviorhood is inseparable from, in fact basic to, that of Lordship. This is brought out with crystal clarity in Question and Answer 34 of the Heidelberg Catechism. 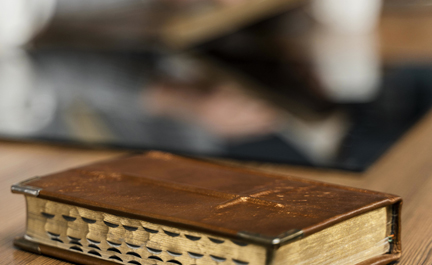 However, before we can speak or write intelligently about the Lordship of Christ, we must know about the eternal decree in which God said to his Son: “Ask of me, and I will give thee the nations for inheritance, and the uttermost parts of the earth for thy possession.” And after that we must deal with creation and providence, for the historical Christ and his mediatorial Lordship (the Lordship stressed in the New Testament) implies that there is a creation, a world, and that God sustains and loves this world; but also that this world has fallen into sin and misery and therefore needs a Mediator. And so we could go on to show that it is pointless to approach all of Scripture from the point of view of God’s relation to man in Christ.

There is, of course, a certain sense in which we can speak of orthodox, Scriptural theology as being Christocentric (that is, centered in Christ). As Dr. Fred Klooster wrote in a recent issue of The Banner on “Neoorthodoxy and Jesus Christ”: “Barth’s position is attractive to many Christians because of his so-called ‘Christocentric’ or ‘Christological’ approach. Does not every Christian wish to acknowledge Christ as the center of all things and to see all doctrines related directly to Christ?” But that is something quite different from making what Scriptures teach about Christ the starting point in a theological system. Dr. Daane has failed to explain just what he means when he writes about understanding the sovereignty of God in terms of the Lordship of Christ. Neither has he explained what he means by this Lordship.

There are some significant remarks on this subject by Dr. James De Forrest Murch in United Evangelical Action (October 1, 1957). We quote him as follows;

“There was strong emphasis on ‘the new Christology’ which the Evanston Assembly (of the World Council of Christian Churches H.J.K.) enunciated as the technique by which ecumenicity will be achieved (See The Coming Church, pp. 33, 34). The delegates were urged to turn from the findings of the regional study groups and from further attempts to clarify and understand the existing differences between the churches to a new appreciation of Christ as Lord of the Church. It was repeatedly stated that in the recognition and acceptance of the Lordship of Christ will come a new freedom and a new sense of our unity in the One Church. This approach has a gripping appeal and stirs the hearts of all who deeply desire the unity so beautifully expressed in our Lord’s Prayer for Unity in the seventeenth chapter of John’s Gospel.

“We hesitate to even suggest that such an approach may have an ulterior motive which is entirely foreign to the spirit of the unity for which Christ prayed. But we cannot be true to our Lord and fail to point out that this new Christology could well be non-biblical and cleverly fabricated to promote the erection of the ‘coming great Church’ which the ecumenical professionalists have already designed.”