“And they sang a new song: ‘You are worthy to take the scroll and to open its seals, because you were slain, and with your blood you purchased men for God from every tribe and language and people and nation.” Revelation 5:9

During the summer months our spiritual walk may at times be in need of spiritual renewal. Bible studies have come to an end, vacations are planned, and the church—and sometimes our spiritual walk—are put on a back burner. We still go to church and have our devotions, but it seems like we are just going through the motions of Christian work and Christian life.

We need spiritual renewal. Every Christian does. And there is no better way to seek spiritual renewal than to be reminded of who it is whom we serve and why it is that we serve Him. We must place ever before us the passion and death of our Savior, Jesus Christ. This meditation seeks to rekindle our zeal for Christ by looking at Him as the Lamb of God.

In the Gospel according to John there are two references to Christ as the Lamb of God. Both are made by John the Baptist who, when he saw Jesus, said, “Behold the Lamb of God who takes away the sin of the world” (John 1:29).

The apostle John wrote not only the Gospel according to John, but he also wrote the book of Revelation. In Revelation John makes mention of Christ as the Lamb almost thirty times. It is rather surprising that this particular designation of Christ—as a Lamb—would appear so often in Revelation, since Christ is revealed to us in His ascension and glory. John’s description of Jesus in Revelation 1:13–16 is hardly a picture of a lamb!

The Old Testament portrayed the Lamb of God as a sacrificial lamb. At the first Passover a lamb had to be slain and its blood was put on the door frames of the Israelite’s homes. By putting the blood on their doors, the Israelites were assured that the angel of death would pass over their homes and spare the firstborn within the house. The death of the lamb provided life for the firstborn—its blood saved the life of the child.

In the book of Revelation, Jesus is that slaughtered and stricken Passover lamb. He is, however, the Lamb exalted. He is addressed as God (compare Revelation 4:11 with 5:13). He is the One declared as “worthy.” In the song sung by the elders in heaven, the worthiness of the Lamb is not based upon His deity, His relationship as the Son to the Father, nor His perfect life of obedience. The reason the Lamb is praised by all of heaven and declared worthy is because of His sacrificial death. In his vision, John sees the lamb in the midst of the throne standing as though He had been slain.

The lamb received His reward for His willingness to suffer and die for the salvation of His people. It is His right to rule because He has merited all things through His sacrifice. The Lamb has overcome through His death and resurrection. Through His death, He conquered sin, death, and hell. He has defeated Satan and his dominion. As a result of His slaughter, He receives authority over heaven and earth.

Before the declaration by the elders that the Lamb is worthy, we read of a scroll that cannot be opened. The scroll contains the decrees of God. In it is the way of salvation; restoration for mankind to God. No one can open it. No one can break the seven seals that lock the scroll. None of the mightiest men on earth, none of the elders in heaven, none of the powerful angels around the throne can open the scroll that lead the human race back to Eden.

The news that none can remove the seals from the scroll caused John to weep. John knew his sin and his need for reconciliation with God. He could cry out with Paul, “O, wretched man that I am! Who will rescue me from this body of death?” (Roman 7:24). There is no one! Indeed this is cause for great weeping—to know that we are forever bound in our sin and enslaved to Satan.

In the midst of his tears, John sees an elder approach who tells him that there is one so powerful that He can defeat the powers of darkness; He is able to break the seven seals and open the scroll. It is the great Lion from the tribe of Judah. John turns to the throne, expecting to see the great Lion, the great powerful warrior, but instead upon the throne is a precious little lamb looking as if it had been slain.And the great book of our salvation is entrusted to this Lamb. He is declared worthy. He is exalted above all. He is the One who has been slain.

This refers to a particular time in history and to a particular act performed by the Son of God. It points us to the time when Jesus purchased mankind from sin and Satan for the service of God. The price of that purchase was not silver or gold, but the precious blood of Jesus Christ. We can never think too much of the cross! It is to the Lamb that was slain, who through that event redeemed us by His blood, that all glory, praise, and adoration must be given.

Blood is life. The essential idea is the self-sacrificed life of the Christ. Upon the Lamb remain the marks of the One who has been slain. He bears the death wounds upon His body. It is not just that He died, but that He died a very specific death as a sacrifice to save the lives of His people.

There are millions of people who have made sacrifices. Many have sacrificed their own lives for what they thought was the greater good. They did not, however, sacrifice their lives in the way Jesus did.

First of all, the sacrifice of the Lamb was in accordance with the eternal plan of God. He was the Lamb slain from before the foundation of the world. There was nothing accidental about His death. From the very beginning—even before the beginning of Genesis 1:1—it had been planned that the Son of God would lay down His life for His people. “He chose us in Him before the foundation of the world, that we should be holy and blameless before Him” (Ephesians 1:4).

In addition, this was a voluntary death. Among the millions that have died in battle, few do so willingly. The New Testament tells us repeatedly that Jesus set His face toward Jerusalem, knowing full well that He would go there to lay down His life a ransom for many. He did so willingly so that those who believe in His sacrifice would have their sins removed from them and placed upon Him, reconciling the sinner to the Father in heaven.

Finally, the sacrifice that Jesus offered was absolutely free from all imperfection. Not one of all the heroes who gave their lives for great and noble causes can make that claim. Jesus the Christ was spotless. He was in every way as we are, yet was without sin. His greatest enemies could not convict Him of any wrongdoing—even the false witnesses could not agree on their testimony. He was holy and separate from sinners. He did not have to pay the penalty for sin that is death.

Our Savior freely took upon Himself our sin and died in our place. The wounds upon His body indicate that He has paid the price. He has obtained the victory for all who believe in Him.

One day we shall see those wounds. John describes Jesus as the lamb standing as though it had been slain, which signifies that the body had been cut into pieces (Leviticus 1:10–13) but now is healed and able to stand before us. The marks of His wounds are still visible. We shall see the nail prints upon His hands and the wound in His side. The scars of His sacrifice upon His perfect body will remind us of the great love that prompted the sacrifice the Son of God made on our behalf.

Through all eternity Jesus Christ will be the Lamb that was slain. We will praise Him because He was slain as a sacrifice for our sins.

Round about the throne are the elders representing the redeemed, the four living creatures who represent all of nature, and the myriads of angels who do the beckoning of Jehovah. And at the very center, in the middle of this great multitude, is the Lamb of God. He has the highest and most exalted place. 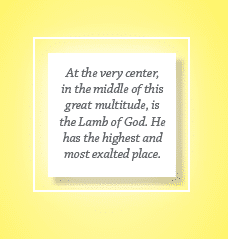 In Revelation 7 there is a great multitude that no person can ever number. They are arrayed in robes of white. They carry in their hands palms of victory and join in the universal song of praise and triumph.

An elder approaches John and asks him, “Those who are clothed in robes of white, who are they and where do they come from?” (Revelation 7:13). The elder was among the others who sang in Revelation 5, “Worthy is the Lamb that was slain.” He represents the church triumphant. He is speaking to John who is still a part of the church militant.

The picture given to us is one of the church triumphant comforting the church militant in her grief, assuring her that the victory has already been won. The Lamb has been slain!

Who are those dressed in robes of white? They have come out of the great tribulation and have washed their robes—made them white—in the blood of the Lamb, Jesus Christ. “Therefore they may come before the throne of God” (Revelation 7:15). The blood of the Lamb assures us that the victory is ours because the Lamb has been slain for our sin.