Of late we have become almost inured to shock by things written in certain periodicals that circulate especially in the Christian Reformed Church. But we were really shocked by two articles in Stromata, organ of our Seminary students and one in Calvin College Chimes.

These articles have caused grief as well as dismay. How we wish the three young brethren had consulted with their professors before publishing their doubts about Scripture. Having publicly committed themselves to deviating views about the character of Bible inspiration they will probably find it difficult to acknowledge that they have erred. We trust they do not have a closed mind on the subject, but are still willing to be instructed in the Reformed approach to Scripture.

First year seminary student Marv. Hoogland wrote an article in the September issue of Stromata entitled: “Infallibility Questioned.” He defends the position that though the Bible is the inspired Word of God it is not infallible since it contains errors in matters pertaining to grammar, poetry, science, and history. It is infallible only when it teaches religious truths.

This article was lauded in a contribution to Calvin College Chimes by William Brown. It states, for example, that Hoogland’s article is “an example of the kind of clear critical thinking so much needed in the current atmosphere of uninformed polemic. Hoogland has bad the good sense to question a doctrine that has become an idol of the Evangelical Tribe.” We never thought we, would live long enough to see members of the Christian Reformed Church vilified in one of our student publications for holding to the Reformed doctrine of the infallibility of the Scriptures.

The third article referred to is another Stomata article, by J. Hoogland, the editor-in-chief, who has difficulty with the inspiration of poetic portions of the Bible; who also maintains that though the Bible is inspired it contains inaccuracies and mistakes in its historical and scientific references.

There are many questions which come to us when we read and reread these three articles. We shall ask only one at this time: Why are not the contributions to Stromata reviewed by Faculty members before publication? We assume this is not done. We cannot imagine Faculty approval of the two articles under discussion. We know that the material that appears in Calvin College Chimes is not submitted for approval. So we have been told. In our opinion it is reckless, from the point of view of public relations, to permit immature students to write what they please and publish it in their school paper without previous consultation with wiser heads. That applies to the Seminary as well as the College. We believe it is cruel to let promising students jeopardize their own reputations in the Church and their opportunities for future usefulness in the ministry by publishing their doubts about certain doctrines which they have just begun to study.

The infallibility as well as the inspiration of the Bible is taught by all Reformed theologians. Great Reformed scholars like Kuyper and Bavinck, Warfield and Machen have defended both. Have the brethren mentioned above studied what these scholars have written on the subject, before they began to write? Why did they not first consult their professors in the matter?

For some time it has been the intention of the men who publish TORCH AND TRUMPET to write on the doctrine of Inspiration. The latest developments show that a discussion of this subject from its various angles is by no means superfluous. One of our number will give special attention to the arguments used in the articles under discussion. Others will discuss the question what the Bible claims for itself. Still others will comment on the Barthian view of inspiration and the teachings of leading Reformed theologians on the matter. We have little room in this issue for a treatment of this very broad subject. But let it be well understood that there is no doctrine so basic and fundamental as that of the infallible Holy Scripture. If this bastion falls all our defenses of the truth of God have crumbled.

A DOGMA AS WELL AS A DOCTRINE

There is just one thought that we wish to present at this time on this truth of the Inspiration of the Bible. It is this, that according to our creed, inspiration and infallibility are inseparable. 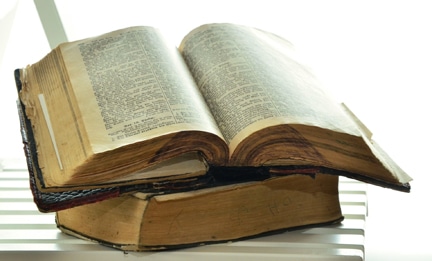 It is not correct to say that our creed teaches that the Scriptures are divinely inspired but not that they are infallible and inerrant.

Not all Christian doctrines are dogmas. Dogmas are Bible doctrines which the Church has enshrined in its doctrinal standards and which therefore have officiaI approval. From such doctrines no deviation can be permitted. The only legitimate way in which an officer or a member of the Christian Reformed Church is permitted to question any article or teaching of our creed is by way of gravamen. He must present his objections or difficulties to the consistory, classis, or synod that the same may be there examined, and he must abide by the decision made. Meanwhile he is not permitted to teach or defend his deviating views either privately or publicly. Hence if it can be shown that the doctrine of the infallibility of Scripture is taught in our creed directly or indirectly, the publication of views which conflict with this doctrine becomes a most serious matter.

There is of course no special article or paragraph in our Belgic Confession which deals directly with the matter of Scriptural infallibility. The explanation is simply this, that this truth was not questioned by anyone in the Reformed Churches at the time when the Confession was written and adopted. Nevertheless, it was clear to the author of the Belgic Confession and the Church which adopted it that inspiration means infallibility.

Thus we read in the first sentence of article IV: “We believe that the Holy Scriptures are contained in two books, namely, the Old and the New Testament, which are canonical, against which nothing can be alleged.” Note that we do not merely read that nothing can be alleged against the religious or moral truths of the Bible. Hence, if we say that there are errors in the Bible, scientific, poetical, and even historical, we are indeed alleging something against the Word of God, even though we say a hundred times that its religious truths are infallible.

Article V begins as follows: “We receive all these books, and these only, as holy and canonical, for the regulation, foundation, and confirmation of our faith; believing without any doubt ALL THINGS contained in them…” Those who hold that there are errors and inaccuracies in the Bible cannot honestly say that they believe all things contained in Scripture. They do not believe “Joshua’s error” about the sun standing still. Neither do they believe that Abraham was in any sense a Hebrew, though the Bible states it. (What objection anyone can have against the statement, considering that “Hebrew” means: one who crosses the river [Euphrates] is hard to imagine. Not less puerile is the contention that Genesis errs when it states that Abraham “pursued unto Dan” the captors of Lot inasmuch as Dan did not exist until Israel had taken and divided the land. We assume that an editor of Genesis substituted the name of Dan, which that northern city of Israel had after Israel had occupied Canaan, for the name of that region or place in Moses’ time—a name which was no longer familiar to the readers of Genesis hun d red of years after the Exodus.) If such statements are errors to us, we can not truthfully say that “we believe without doubt all things contained in the Scriptures.” We should then say that we believe only the religious truths in the Bible. We then belong to that group of people who believe that the Word of God is in the Bible but not that the whole Bible is the Word of God.

Turning to article VII of our Confession, we read: “…it is unlawful for anyone, though an apostle, to teach otherwise than we are now taught in the Holy Scripture; nay, though it were an angel from heaven, as the apostle says. For since it is fm·bidden to add unto or take away anything from the Word of God, it does thereby evidently appear that the doctrine thereof (doctrine means teaching and includes all of Scripture) is most perfect and complete in all respects.” The two writers in Stromata already mentioned cannot in all honesty agree with these statements. They contend that certain elements of the teaching of Scripture are imperfect, in fact erroneous.

Lastly, in the conclusion of the next paragraph of this same article the Church declares: “Therefore we reject with all our hearts whatsoever does not agree with this infallible rule, which the apostles have taught us saying: ‘Prove the spirits whether they are of God.’ Likewise: ‘If any cometh unto you, and bringeth not this teaching, receive him not into your house.’” The words: “this infallible rule” refer to what has just been mentioned: the Holy Scripture. By the way, a comma, missing here, in our Psalter Hymnal, should follow the word “rule,” as in the French original and Schaff’s English translation. There is no expressed antecedent in what follows the words: “this infallible rule.” The antecedent precedes. The thought in what follows is rather crowded. Proving the spirits and receiving not those who reject the Bible cannot be “this infallible rule.” That would not make sense. The thought is simply this: “This infallible rule” of the Holy Scriptures was in the mind of the apostles when they said: Prove the spirits and receive not into your house those who bring not the teaching of those Scriptures. By that “infallible rule” the spirits must be tested, and those who reject the teaching of that “infallible rule” should not be received as fellow-Christians.