ANNOUNCER: The court room is crowded to capacity for the hearing. Will the defendant be brought to trial for his crimes, or will his vast wealth and great influence in high places set him free to continue his career of violence and lust? We will know shortly. The judge raps his gavel for silence in the court. Mr. Baker, the attorney for the plaintiffs, is questioning his first witness, Mr. Ralph Stone…

BAKER: Now Mr. Stone, will you tell the court briefly, and in your own words about your relationship with the defendant?

STONE: Yes…(CLEARS THROAT)…I had my doubts about him from the very first…but I learned that he was a personal friend of some of the best families in town, so we had him in one evening. I must say he was very agreeable company. Both our children, Sally and Bob, took to him right away. In fact I would say he really has a way with children. I have never met a child who didn’t hang on to his every word.

BAKER: Tell us more about his influence on Sally and Bob.

STONE: Well I began to notice that every once in a while he would tell an off-color joke. This I didn’t like! Then another thing…he was often talking about sex in a way I didn’t like. I told my children that if he did not know how to respect our home and our standards of right and wrong he would have to leave. But they put up such a howl, and so I didn’t do anything about it. I really hated to take any drastic action because…well…I…The children so enjoyed him.

BAKER: Tell us briefly what happened next.

STONE: Well, when our Sally was fifteen, he told her a fascinating story about a girl who was just about her age. This girl ran away from home and went to Hollywood and became a big movie star. It sounded like a lot of nonsense to me…but Sally believed him…and our daughter ran away from home six months ago.

BAKER: And did she go to Hollywood?

STONE: She left a note saying she was going there. We’ve had the police looking for her, but she just disappeared. We’re half out of our minds with worry.

STONE: He told Bob that it was smart and up-to-date to smoke and drink. I told Bob that he was crazy…but he told my son about some of his personal friends who are big celebrities and they smoke and drink. Bob is a steady smoker now and I know he drinks when he’s out of the house…and twice now, Bob has come home drunk. He didn’t learn that from us, his mother and father, because we are against those things.

BAKER: Do you see the man who did these things to your family in the courtroom today?

STONE: Yes…the man over there in the brown suit…with the one eye. SOUND: (MURMUR OF CONCERNED VOICES RISING)

ANNOUNCER: The next person to take the stand was Mrs. Brenda Marks.

BAKER: Please be seated Mrs. Marks. Now please tell the court in your own words, exactly how the accused led your teenage son to violence and death?

MARKS: Our son Steve was only five years old when we first met the defendant. I must say I never dreamed the harm he would eventually do in our home, or I would not have permitted him inside the door. Little Steve was especially fond of him and would sit at his feet, fascinated by the wonderful stories he could tell of his travels all over the world… 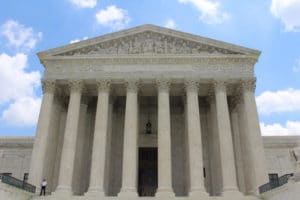 BAKER: But about this crime your son committed…What connection was there between that and the accused?

MARKS: He told him how to do it!

BAKER: Were you present on this occasion?

MARKS: Oh no! I would have run him out of the house if I had had any idea. It happened when Steve was fourteen. My husband was working that night…and I had a club meeting. It was while we were out of the house that he told Steve he had a foolproof plan for robbing a store. He told how someone else had committed this very kind of robbery, and was caught and arrested only because he had made one foolish mistake. If he had not made this one mistake, it would have been a foolproof plan.

BAKER: And then…MARKS: Steve left the house that very night. He knew we would not be home for another hour or so. He got a toy gun and tried to rob a store. But the owner of the store had been robbed twice before. He had a gun…a real gun…and he shot my son! My boy is dead. Our only child!

BAKER: Now, Mrs. Marks…do you see the man who masterminded this attempted robbery here in the courtroom?

MARKS: Yes…There he sits on the right side of the room…The man with the one eye.

MUSIC: (TRANSITION) ANNOUNCER: And so it went all morning as one witness after another was brought to the stand to testify against the defendant…the mystery man…the man with one bright, shining eye. Now the defendant is taking the stand in his own defense! He is sworn in. He takes the oath, and his lawyer, Mr. Graves, speaks.

GRAVES: Will you give the court your name?

GRAVES: If the court please, I think the very best defense I can make for my client, Mr. T. Vee, is to simply let him answer the charges which have been made against him.

VEE: Well, a lot of nonsense has been aired in this courtroom today about me and my so-called wicked influence. I have been accused of teaching children to smoke and drink, but I defy the right of anyone to challenge my liberty in this matter! I have been accused of influencing the children I’ve known, and I do not intend to deny it! But the point is this…if I am guilty as charged then these parents who accuse me are just as guilty as I am! I have never gone into any home unless I was invited by the mother and father. I have influenced their children only as much as they would allow it…and I was ready to make my exit whenever they told me it was time to go. But they never did! Don’t blame Mr. T. Vee for your troubles parents. Blame yourselves .. for YOU are the guilty ones …not me!

ANNOUNCER: The hearing is over. The judge is about to render his decision regarding the testimony for and against the defendant, Mr. T. Vee. The judge speaks …

JUDGE: There is no question but that the accused, Mr. T. Vee is guilty of every charge brought against him in this court today. However, it has become very evident that he cannot be brought to trial.

JUDGE: Mr. T. Vee cannot be brought to trial, for in each case, the parents of these children have testified that Mr. T. Vee was an invited guest into their homes. When they saw the evil influence he was having on their children, they could have ordered him out of the house once and for all, BUT THEY DID NOT! Case dismissed!