The Latin phrase Ecclesia reformata, semper reformanda “The church reformed must always be reformed”—originated in 17th-century Holland. Its use in that context makes our contemporary habit of quoting it to justify significant change in the church seem not just questionable, but incorrect. Among the Dutch theologians who first expressed this thought, it spoke of the need to extend the Scripture principle of the Reformation to every aspect of life, and to guard the progress of this “Further Reformation” against our sinful human tendency to laxity in faith and morals. This phrase places a question mark beside every proposal for change in the teaching and practice of the Reformed church, and asks about its Biblical warrant. This does not mean that no change at all is envisioned, but that all change in our faith should be justified in terms of the plain, literal sense of the Bible. 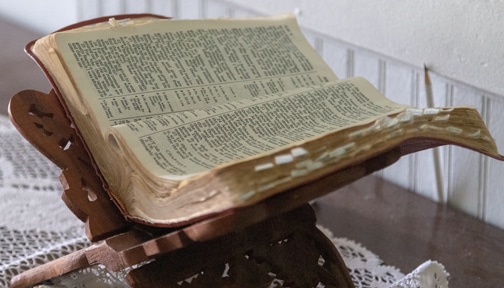 The Utrecht theologian Johannes Hoornbeeck (1617–1666) appears to be the original source of the thought (Brienen, et al., De Nadere Reformatie, 1986, p. 93). One of his former students, Jodocus van Lodensteyn, quotes “a learned man,” using the Latin terms that are familiar to us: “The church desires not to be called reformata, or reformed, but reformanda, or being reformed. What a pure church would it become, which always was thus occupied!” (Beschouwinge van Zion, 1676, 11/137). (Some have thought van Lodensteyn’s reference to a learned man spoke of Gjisbert Voet, a better-known Utrecht theologian of the same period. This now seems to have been a mistake, although Voet does sometimes speak of the need for continuing reform.)

Van Lodensteyn was a scrupulous Christian, andsomewhat suspicious of the institutional church. He came to see the decline of faithfulness he observed in the Reformed church as part of a pattern of renewal followed by decline. In order to stop the cycle, constant willingness for the church to be reformed according to the Word of God was necessary. He was deeply aware that we never come to perfection, but rather we tend to “sag” in our piety (Beschouwinge van Zion, vol. 2, p. 65). In this context, van Lodensteyn spoke of the need for continual reformation.

Similarly, another former Hoornbeeck student, Jacobus Koelman, quotes his teacher as having said, “We must want to be called Reforming, and not simply Reformed, so that we must always be reforming if we want to be Reformed and deserve the name. Otherwise we do not make the effort” (De Pointen Van Nodige Reformatie, 1678, p.619). The passive voice in Dutch is a bit awkward,and native Dutch speakers tend to avoid it. As a result, this quotation sounds as if the church is thought of as responsible for its own continuing reformation. However, in the larger context of Hoornbeeck’s theology, it is clear that an act of God upon the church and society consistent with the Word of God is meant, and not self-motivated change for its own sake.

All these theologians were part of the international Protestant movement that in the Netherlands was called the Further Reformation, while in other parts of Europe it was known as Pietism, and in England and America, Puritanism. Dutch theologians such as Hoornbeeck and Voet, as well as the English expatriate William Ames, provided important leadership in that movement. Thus, what we know as the Puritan effort to build a Christian social order on the foundation of a Biblically ordered church is the intellectual home of the semper reformanda idea.

The form of the phrase that is familiar to us is not the only one. As it moved out of Holland, it appears to have developed in different forms in other areas.The Swiss historical theologian Alexander Schweizer is said by one scholar to refer to ecclesia semper reformari debet as “a statement of our old orthodoxy” (Barczay, Ecclesia Semper Reformanda, p. 19, n. 36; but there is an error or incompleteness in the reference. It is not in Schweizer at the specified location). This form of the slogan, supposing it is genuine, may be translated, “the church ought always to be reformed.” Reformari in Latin is the present passive infinitive of the verb reformo. It is important to note that it is passive, as other formulas including the one in the Book of Order also are. This means the slogan asks us to see the church as the recipient of reformation and renewal, not the agent of its own change.

In German-speaking Reformed churches, the most common form of the phrase is ecclesia semper reformanda. It is not easy to account for this shortened form of the phrase before the middle of this century. While it clearly depends upon Hoornbeeck’s basic thought, it appears to have emerged in exactly this form fairly recently. In 1959, the Roman Catholic theologian Hans Kung lectured at the University of Basel on the topic, “Ecclesia Semper Reformanda.” Karl Barth suggested the theme, and it may have come to him through the work of his friend Wilhelm Niesel, a Calvin scholar. In a book that grew from that lecture, Kung speculates that the phrase emerged, “perhaps quite recently, in Calvinist circles” (The Council, Reform and Reunion, 1961, p. 9). He is sometimes said to have argued that it developed before the Reformation, but this is a mistake. On the other hand, it is a theme in Kung’s work that the Reformation was not the first (or last) time a need for reform was recognized in Christian history.

About this time, two prominent Presbyterians began to use the phrase, or the thought it expresses, around the church. In 1959 James I. McCord made it a theme in his inaugural address as president of Princeton Seminary, and thereafter he used it often in lectures and sermons. Then in 1960, Eugene Carson Blake used it in his well-known sermon in San Francisco’s Grace Cathedral which led to the formation of the Consultation on Church Union (COCU). In this sermon, Blake shows that he knows that reformation is always according to the Word of God. At the same time though, he appears to have introduced the misunderstanding of the phrase with which we are struggling today, which subordinates the reformation according to the Word of God to a more comprehensive authority of ecclesiastical tradition.

Despite its long history, our phrase had apparently never been used in the official documents of a Reformed church until the 1983 Book of Order of the Presbyterian Church (USA) (G-2.0200). Unfortunately, the translation in the Book of Order, “the church reformed, always reforming,” is incorrect and therefore misleading. It employs wording Blake sometimes used, as when he spoke of “our reformed and reforming tradition” (The Church in the Next Decade, 1965, p. 107). However, the word reformanda is a gerundive in Latin grammar, and the gerundive is always passive in force. Ecclesia reformata, semper reformanda is better translated, “the church reformed must always be reformed.” It is understood, as the Book of Order notes, that this means “according to the Word of God.”

The Biblical standard, while it is only implicit in the formulas as we have them, is important for correct understanding of the phrase. A high Biblical standard was an element of the Reformed tradition from the beginning This is what gave content to the idea of a distinctly Reformed church in the first place. In 1577, Queen Elizabeth I needed, in a letter to the Elector of the Palatinate, to distinguish the churches that adhered to this strict Biblical standard from Lutherans, who were somewhat less concerned about human traditions. To do so, she spoke of the ecclesiae reformatiores, the “more reformed churches.” This appears to be the first instance of the word Reformed used to specify the churches of our tradition. Thus, whenever one speaks of an ecclesia reformata, a Reformed church, this Biblical standard is implied. The term “Reformed church” can be understood as shorthand for “The Church Reformed According to the Word of God.” From this understanding of the slogan’s history, several conclusions for its use today follow.

First, the basic meaning of the motto is that reformation is an ongoing necessity in the church. Reformation must be continual, because human weakness in faith and morals is inevitable. This idea is related to Calvin’s conviction that the human soul is a factory of idols. Because of this human trait, the reformation of the church’s faith and practice according to the Word of God can never be finished. In his History of the Reformed Church in France, Theodore Beza, Calvin’s successor in Geneva, refers several times to the necessity and difficulty of sustaining the reform of the church. The Reformed recognized early on that the task of purifying the faith and practice of the church from accretions that lack Scriptural support would be unending.

Second, reformation is a matter of grace and not of works. The passive sense of reformanda shows that the slogan calls the Reformed church to modesty in faith and life rather than to innovation. Reform and renewal do not come to the church through interest group activism in church government. Nor does it arise out of cultural pressure, or from religious needs and experiences. Instead, continual reformation is the result of the illuminating work of the Lord God through careful, clear-minded and prayerful attention to the words of Scripture applied to the faith and life of the church. Though it is necessary that the church be willing to be reformed according to the Word of God, such reformation is God’s work, not ours.

Third, the idea of a church that is Reformed and perpetually in need of reformation expresses a willingness on the part of the whole church to repent. The church is made up of sinners saved by grace. Our lives and so inevitably our churches are filled with self-service where the service of God alone is called for. Repentance, reformation and renewal are therefore always necessary. Our confidence in our forms, traditions and habits must always be limited, because the church on Earth can never say the final word concerning our own faithfulness. An ecclesia reformanda recognizes this, and seeks reform and renewal as an act of God.

We must clearly understand, though, that the slogan does not justify change in any simple way. The slogan tends to privilege the Reformed status quo, while requiring that both the status quo and proposed change be justified by reference to Scripture alone. The call to continuing reformation is not acall to spin new faith and forms out of our own heads, or out of the surrounding cultural mix. It is not a call to be either innovative or relevant. Rather, it points us to the text of Scripture interpreted prayerfully as a bulwark against human innovations and modifications in the church’s faith and practice, which slip into our common life in spite of our attempts to be faithful. This slogan states our determination to let the Word of God be a filter that strains out such accretions. Continuing reformation occurs in the church through the discipline that comes from hearing the Word of God, and “listening not to the voice of a stranger.”

Ecclesia reformata, semper reformanda proposes a limit on every extravagance in the Reformed church through the Protestant principle: sola Scriptura, Scripture alone. When it is used to justify dramatic change in response to cultural pressures or interest group activism, or when the church is understood to be reforming itself by its own effort and lights, the formula is fundamentally misunderstood and misused. It is a call not to innovation, but to modesty, exegesis and self-examination.

Michael D. Bush, a Presbyterian minister, is a graduate student at Princeton Seminary.