The Word of God begins with profound simplicity: “In the beginning, God created the heavens and the earth” (Gen. 1:1, English Standard Version). It states with the same profound simplicity, “So God created man in his own image, in the image of God he created him; male and female he created them” (Gen. 1:27). Yet, humanity, even within the churches, continues to be confused with these simple truth statements of divine revelation. 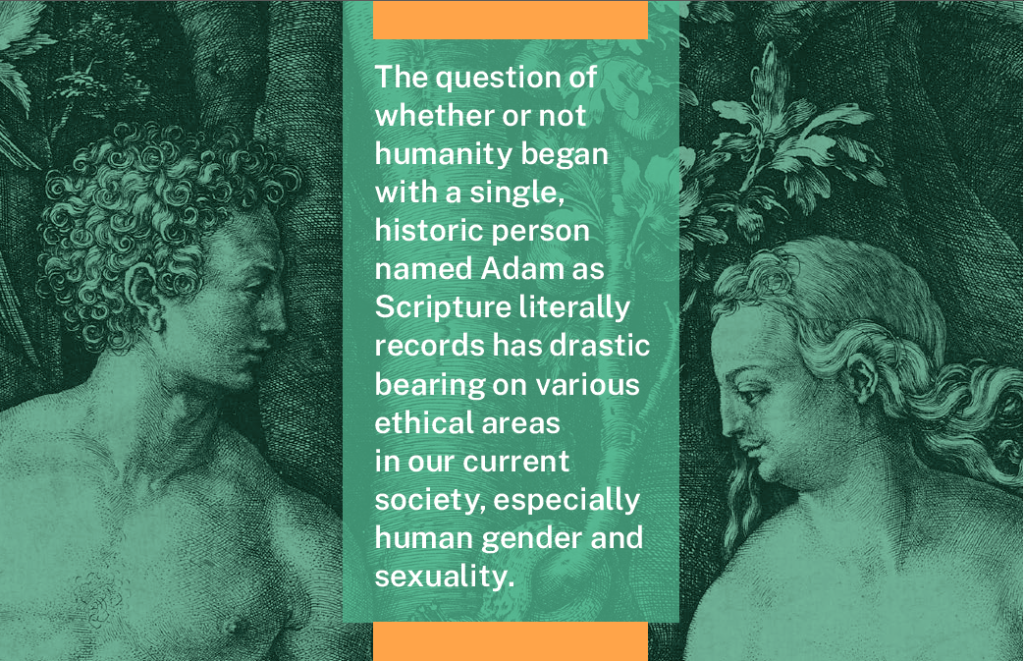 Throughout the history of the New Testament church there have been those in the church and the world who have challenged and denied the literal account and interpretation of creation as recorded in Genesis 1 and Genesis 2. Under the influence of pagan philosophy and with an erroneous allegorical hermeneutic for interpreting the Scriptures, some of the early church fathers held to a figurative interpretation of the days of creation. These men included Origen, Augustine, and Aquinas.

However, among the major Protestant Reformers there was a recommitment to a literal sense historical-grammatical hermeneutic in the interpretation of the Word of God. This hermeneutic, or method for interpreting the Bible, led Martin Luther and John Calvin, as well as the vast majority of the Dutch Reformers and Puritans, to reject a figurative or allegorical view of the creation days in favor of a literal interpretation of the days of creation.

During and subsequent to the Reformation era, in the 1700s and 1800s, the Enlightenment movement gave rise to Socinianism and Deism. These movements emphasized man’s mere reason as the standard for interpreting the Bible. All of the alleged supernatural events of Scripture were denied and reinterpreted in line with man’s scientific discoveries and knowledge. In summary, natural revelation and/or scientific observation eclipsed special revelation in the Word of God, the Holy Bible. This was especially prevalent among the academia of the leading universities of Britain and Europe.

A macro-evolutionary explanation of the origin of all things was in existence before the writings of Charles Darwin. However, it was especially through Darwin’s work, in response to his exploration and exposure to “primitive savages,” that the macro-evolutionary process as the cause of the origin and development of humanity became popularized. His ideas included theorizing about co-Adamites and a hierarchy of “races.” These ideas were used to justify horrific practices of inhuman treatment of some races, including the justification of the institution of slavery. Many persons conveniently omit or forget the full title of Darwin’s infamous book, On the Origin of Species by Means of Natural Selection, or the Preservation of Favored Races in the Struggle of Life. The recent edition of this work advertised on Amazon is simply entitled On the Origin of Species.

In the second half of the nineteenth century, such macro-evolutionary explanations of the origin of the human race were adopted by German theological liberals and infiltrated European universities and seminaries. These theologians explained away the literal historical-grammatical interpretation of the days of creation by referencing a combination of Near Eastern cosmology and mythology along with an alleged ancient worldview of the author of Genesis. In their view, the author of Genesis was a simple-minded child of his times. Based upon these factors, Genesis 1 and Genesis 2 were read as an “ancient poetic literary device,” and the literal days were denied.

Throughout the early 1900s, Calvin Theological Seminary and the Christian Reformed Church stood fast against these theories under the leadership of professors such as Geerhardus Vos, William Heyns, and Louis Berkhof. However, in the 1950s, under pressure from the science department of Calvin College and the writings of Howard Van Til, some Christian Reformed pastors and theologians began speaking and tolerating views of a “literary framework” understanding of Genesis and a “progressive creation.”

Today, this tolerance has spread to include teachers and organizations within the Christian community who aggressively deny the origin of the human race to be a historical Adam. These efforts include the organization BioLogos, headed by a former Calvin College professor, and Jesus Loves You and Evolution Is True: Why Youth Ministry Needs Science, a book by a religion professor at Northwestern College. It also includes Reasons to Believe, an old-earth advocating “ministry” with a 3.1-million-dollar annual budget.

Many Christian colleges, universities and seminaries are now adamant in their denial of a literal interpretation of the days of creation. They do not ignore or deny the Bible outright, but rather they propose a different way of interpretation. In their view, Genesis 1 and Genesis 2 are to be viewed as a Near Eastern, culturally conditioned, literary framework through which God revealed some general truths concerning the origin of all things. This then allows for a belief in a macro-evolutionary theory of the origin of the human race, which they believe matches the scientific evidence and data concerning the age of the universe.

Now a further step is being taken by some Christian professors and teachers. This step is advocating that the origin of the human race likely included one or more pre-Adam hominids from which Adam and Eve were perhaps selected as representatives in relationship to God. Adam is not viewed as the head of the human race in the sense of being the first human being, created by an immediate act of God by the formation of his body and the impartation of his soul.

The views of evolution have evolved. And ideas have consequences. But why pick up this debate again? What is at stake? This matter of truth and interpretation is important in relationship to biblical reliability, doctrinal fidelity, and ethical morality. While attention could and should be given to the first two areas, great concern is also raised in relationship to the realm of ethical morality.

The question of whether or not humanity began with a single, historic person named Adam as Scripture literally records has drastic bearing on various ethical areas in our current society, especially human gender and sexuality. The past decade has seen an alarming evolution of perversions within human sexuality, including the advancement and acceptance of homosexuality and gender fluidity. How does this relate to one’s view of Genesis 1–3?

The biblical and historical understanding of the Christian church, and of human society, of the binary genders of humanity is based upon the clear statement of Genesis 1:27, “So God created man in his own image, in the image of God he created him; male and female he created them” (emphasis added). Recognizing the reality of the consequences of sin in defects resulting in rare cases of sexual ambiguity, it is true and should be clear that there are two genders or sexes, male and female. These two genders comprise the race of humanity and are designed and created to be complementary to one another. That is why Genesis 2:18 states, “Then the Lord God said, ‘It is not good that the man should be alone; I will make him a helper fit for him.’” That helper was a woman.

Furthermore, the biblical and historical understanding of the interrelation between these two genders is that sexual expressions of intimacy are morally good and pleasing to the Creator only when exercised between two persons of opposite gender who are united together in the creation ordinance of the sacred institution of marriage.

However, once the moorings of literal historic-grammatical interpretation are loosed for a figurative interpretation of the opening chapters of Genesis, the ship of human ingenuity is set free for all sorts of deviations in regard to human sexuality. An evolutionary model for the explanation of the origin of humanity practically erodes the inerrancy, sufficiency, and clarity of the Bible. It also denies the veracity of the account of creation, the fall, and redemption. Culture and the Christian church are reaping the fruits today of a shift in methods of interpretation in regards to Genesis 1–3 that became popular yesterday.