Elijah’s lament when he lay discouraged under the juniper tree: “the children of Israel have forsaken thy covenant, thrown down thine altars” was not the utterance of a religious pessimist. The actual religious situation in Israel at that particular time was correctly indicated by the Lord’s prophet. Every word in his description of Israel’s apostasy was true. In his response the Lord did not deny the truth of Elijah’s complaint. Israel had indeed forsaken God’s covenant and thrown down his altars.

Are we approaching a situation in the Christian churches, even those of Reformed persuasion, in which it could be said of us and our children: “they have thrown down thine altars”?

What about our family altars? What about the worship of our covenant God in our homes? Can it be denied that family worship has deteriorated in many of our Christian homes during the last 50 years? Half a century ago the Bible was read and prayers were offered at every meal and every day of the week. Usually an entire chapter was read and the Bible books were read consecutively, with no omission even of genealogies. True, sometimes it was a drab performance, a mere form. Besides, the method could have been improved, but this can be said in its favor: It made our parents or grandparents conversant with Scripture. They knew where important passages or verses could be found and they were able to quote from the Word of God. How many of our people today can quote from it?

We do not say that fa mily worship has lost its vitality, its spiritual tone, in all our homes. It could be shown that in at least a small proportion of our families there has been improvement in the matter. We believe that the daily usc of such aids as the Daily Manna Calendar, the Family Altar meditations of the Back to God Hour, or of the Daily Devotions page in The Banner has been instrumental in keeping our altar fires burning in per hap s many thousands of our homes.

NO ROOM FOR OPTIMISM

Nevertheless, we cannot be optimistic about the future of our family worship. We are unable to quote pertinent statistics to prove that our family altars are on the way out. It might be well for one of our organizations with sufficient prestige to evoke the necessary response to send out questionnaires to learn just where we stand in the matter. Yet we believe that few if any will feel inclined to question our assertion that in a large number of our families the worship of God at mealtime has deteriorated to such an extent that, unless the trend is reversed, it will disappear in many of them within a single generation.

We know from persistent inquiries made when we were still in our last church that in about 75 percent of our families the Bible was read only once a day. We are sure that it was no better in other churches, perhaps worse in some. That was at least fifteen years ago and there is every reason to believe that the increasing popularity of radio and television and in general the ever intensifying rush of modern life have worsened the situation. In most of our families God is worshipped only once a day at the most and in many instances, we fear, in a perfunctory manner. We believe that unless more will be done than has been done so far to prevent the gradual decay and disappearance of our family altars, the time is not far hence when family worship will be extinct in the majority of our Reformed homes. 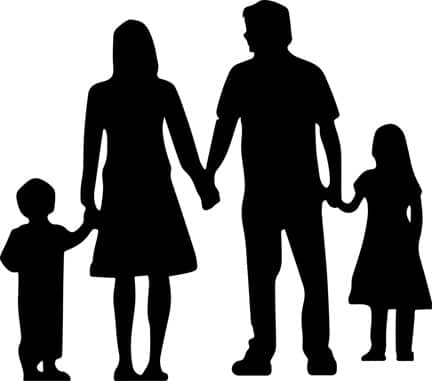 THE HOME UNDER ATTACK

There are powerful forces in modern life which militate against the preservation of the religious distinctiveness of our homes. The family is the innermost fortress of Christianity. Even the church depends on the home for its well being. Once the home was more or less isolated from the destructive influence of the evil world, but this is no longer true today. It is exposed to all manner of evils which threaten its very existence.

Christians should be genuinely alarmed about the perils which confront their homes. We all know what devastation is being wrought in the non-Christian homes of our country, and aU other countries which are nominally Christian, by such mammoth evils as contract marriage, easy divorce, widespread marital unfaithfulness, the breakdown of parental authority, obscene literature, suggestive radio and television programs, and many others. Are not our Christian homes in danger of being engulfed by this flood of ungodliness? One of our strongest defenses against all these evils is the family altar. Without it our Christian homes will be swept off their foundations. Many have already succumbed to the evils just mentioned. If the process of degeneration continues the outlook for the church is grave in deed. Though we have the promise that even the gates of hell will not prevail against the church we cannot sit idly by. When the enemy comes in like a flood Christians must Eight to the death against the evils that crowd in upon us from all sides under the leadership of Satan. God will not save our homes from destruction if we raise only feeble voices of alarm and fail to act.

WHEN THE FAMILY ALTAR CRUMBLES

What will be the consequences if we fail to work and to fight for the preservation of family worship?

First, the result will be the complete secularization of our homes. A home without the family altar can be a Christian home only in name, even though the members still have church connections. When God no longer speaks to the family through the reading and study of his Word and the family no longer speaks to God in prayer, God’s covenant is broken and apostasy has taken over. Religious tradition may still keep that family in the church but the break with Christianity will be complete in the next generation.

Moreover, the secularization of the home is bound to lead to the secularization of the church. When Bible reading ceases in the homes of which the church is composed the spiritual ignorance of the members becomes so great that they will have no taste for Biblical preaching and no ability to understand solid sermons. Besides, there will be no interest in the meetings of church societies where the Word of God is studied.

HOW TO SAVE OUR FAMILY ALTARS

It will be easier to mend our family altars than to rebuild them after they have once crumbled. What can be done to prevent their disappearance? How to improve family worship is another question which will have to wait for attention till a following issue. What else can be done to save it?

First, more attention should be given in our preaching to the indispensability of family worship and in general to the spiritual needs of the Christian home. In catechism classes and society meetings much emphasis should be placed on what constitutes a Christian home. In family visiting the importance of family worship and the need of improving it should be the most important subject for discussion. A mere inquiry whether prayer is offered and the Bible is read at mealtime is not sufficient. In many instances it may be advisable to concentrate on that subject to the exclusion of everything else.

We believe the precious doctrine of the covenant as taught in Scripture. We hold that God wants to save the children as well as the parents in the home and to perpetuate his grace from one generation to the next. But this does not happen automatically. Merely teaching and believing that our children are covenant children and sending them to the Christian school is not sufficient. All this will fail to make the church strong and virile unless Christ is honored in our homes, unless all its relationships are controlled by his Spirit, unless the family as a unit daily seeks the face of God in prayer and listens attentively to his Word. We must live as a covenant people in every phase and ramification of family life.

LOSING OUR FAMILY ALTARS BY NEGLECT

Elijah complained: “the people of Israel have thrown down thine altars.” Today God’s people do not have the kind of altars which can be thrown down; but the kind we have can disappear through sheer neglect. The consequences will be the same. God’s covenant is broken, his Name dishonored. Thank God, there are more than five thousand among us who have not bent the knee to Baal many more. But there was a time in Israel’s history as well as ours when there were many more than five thousand who worshipped Jehovah. Apostasy too comes in on sneakers.

We arc living in a much richer spiritual dispensation than Israel in Elijah’s day. This is the age of the indwelling Spirit, the completed Bible, and the printing press, so that every family and every individual can have one or more copies of God’s Word for a small price. Is there a greater sin in such a day than the neglect of the Word of God?

Let us pray earnestly that men may again hunger for the Word. Let there be a revival of interest in good religious reading and a solemn determination to let no modern invention, no social engagements, no earthly pleasure, and no press of business interfere with the worship of God in our covenant homes.