In this article we will consider the Fourth Plague, and the distinction that Jehovah makes between the Hebrews and the Egyptians. The application of this theme is profound for both the church and for individual Christians.

pattern. In both accounts, Moses is commanded to meet Pharaoh in the morning, at the bank of the Nile. During this encounter Moses is instructed to confront Pharaoh with the demand to release God’s people so they might serve Him in the wilderness. In regard to the first and the fourth plagues the warning is the same and the time of the warning is the same. The instructional formula is the same. The similarities between the first and the fourth plague indicate that a new series of plagues is beginning with the fourth plague. With the beginning of this plague a new wave of judgment will roll over Egypt unless Pharaoh humbles himself.

With the fourth plague there are also important differences. The magicians are no longer present. They have been defeated with their inability to imitate the third plague. As a result they have withdrawn from the scene of the conflict. In spite of the acknowledgment by the magicians that the plagues are the result of the gods, Pharaoh continues to struggle against Jehovah. We should view Pharaoh’s refusal to acknowledge defeat as evidence of his hard heart and his arrogance.

If Pharaoh’s appearance before the Nile was religious in any way then it reflects the hardness of his heart. Even after his god had been humiliated and defeated, the king of Egypt returns to his defeated god. This illustrates the thinking of men and women that are dead in sin. At the very core of their soul they remain committed to that which is false, even if it makes no sense. In Pharaoh we have a picture of man’s hostility toward the one true living God, even when it makes no sense. 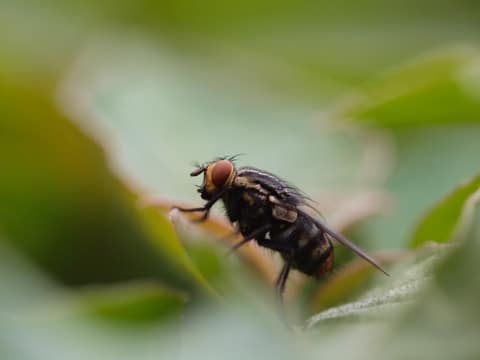 The announcement of the fourth plague includes a play on words: “If you do not send out my people, behold, I will send out swarms of insects on you.” The extent of the plague is accentuated by the fact that not only will the Egyptian houses be filled with flies, but all the ground will be filled with insects. It will be as if all of Egypt is covered in a dense cloud of biting insects. There will be no open space that is unaffected. We are told that the land will be ruined by the insects.

“But on that day I will set apart the land of Goshen on which my people are standing. No insect will be there, in order that you might know that I am Jehovah in the midst of the land.” The setting apart of the land of Goshen is an example of election. God elects the nation of Israel as His own; they are objects of His mercy. God protects the Hebrews from the fourth plague. This is the first time that we are told that the land of Goshen did not suffer from one of the plagues.

The purpose for the division is plainly stated and restated. “‘But on that day I will deal differently with the land of Goshen, where my people live; no swarms of flies will be there, so that you will know that I, the LORD, am in this land. I will make a distinction between my people and your people” (8:22, 23).

The distinction between the Hebrews and the Egyptians is described in verse 23 as a distinction between My people and your people. The distinction between My people and your people does not mean that Jehovah is not in authority over the Egyptians; in fact, the opposite is true. We are told explicitly in the text that the purpose for this distinction is to demonstrate that Jehovah is present in the land of Egypt and that He has authority over the land. Jehovah is present and He is clearly sovereign over the land. and He is sovereign over the people of Egypt, in fact, He is sovereign over Pharaoh. God allows Pharaoh to rule the land, He allows Pharaoh to exercise authority over the people of Egypt, but he does so as one who enjoys a delegated authority. In no way does Jehovah forfeit His own authority. By delegating the rule of Egypt to Pharaoh. There is no authority that functions independently of God’s sovereignty. Every human authority is a delegated authority.

As God caused David to rule in the midst of his enemies, likewise the Messiah rules in the midst of His enemies. During this present evil age, Christ continues to rule in the midst of His enemies, but in the age to come His enemies will experience the unveiled wrath of God. The fact that God allows His enemies to continue in this age should not be viewed as a sign of weakness or an indication that God is not in control. Even in this present evil age God is in control, but a time is coming when we will see and experience the perfected rule of Christ as His enemies are dethroned and judged. On this day Jesus will divide between the sheep and the goats. This distinction will be just as public as the distinction between the land of Egypt and the land of Goshen.

Psalm 110 describes the rule of Christ in this age, but it also describes the end of this age as a day of wrath for God’s enemies. “The Lord is at your right hand; he will crush kings on the day of his wrath. He will judge the nations, heaping up the dead and crushing the rulers of the whole earth.” Therefore in this age God allows hostile rules to continue, but He rules in their midst. They enjoy a delegated authority, but a day is coming when this will no longer be true.

The Kingdom of God

The apostle Peter in his first epistle addresses this book to God’s elect, strangers in the world, scattered throughout. Peter thinks of us as strangers, aliens, and pilgrims living in a place where we do not quite belong because we belong to another land. Likewise, in the book of Hebrews we read “by faith Abraham made his home in the promised land like a stranger in a foreign country; he lived in tents, as did Isaac and Jacob, who were heirs with him of the same promise. For he was looking forward to the city with foundations, whose architect and builder is God.”

Every believer should live with the conviction that although the earthly governments may not acknowledge Christ as King; this does not change the fact that Christ continues to rule in the midst of His enemies. Knowing that Christ rules over every established power and authority, even those that deny His existence, should be a source of great comfort.

As Christians it is vital that we live our lives with an understanding that there is a distinction between the world and the people of God. This distinction is critical to the spiritual health and well-being of the Church and of every individual that claims to be a Christian. Apart from this distinction the church will never maintain its unique identity and its spiritual mission. In conclusion when a church loses this distinction it forfeits the gospel.