An average of 1.04 billion people see this question every day.1 It’s the welcoming query of Facebook, a social media platform designed to help people around the world stay in touch. It’s an invitation to post something personal on your “wall” so that other people can “like” it (and recently, also react with “love,” “haha,” “wow,” “sad,” or “angry”). It’s the portal into a new global culture.

Don’t let your eyes glaze over at the statistic I just mentioned. An average of 1.04 billion people worldwide use Facebook every day. Not every year, not every month; every day. That’s 15 percent of the world’s population; that’s three times the population of the United States. Imagine a room big enough to hold 1.04 billion people—you can’t. And now imagine all 1.04 billion of them talking at the same time. That’s Facebook.

Like its fellow platforms YouTube, Twitter, Instagram, Snapchat, and Yik Yak, Facebook lies at the heart of a strange dilemma. On the one hand, the idea of a global forum is thrilling. I love being able to interact with friends from Long Island, Grand Rapids, and the Philippines simultaneously. I love being able to easily stay in touch with my family or my home church, even amid a crazy college schedule. For these things, Facebook is wonderful.

But at the same time, social media is a little unnerving. Besides the torrent of overt immorality facilitated by these technologies, much of Facebook’s content has a subtler undercurrent. It’s sarcastic, trivial, and insipid. It’s thoughtless, dishonorable, and narcissistic. The headlines say it all: “2 Seconds to Reshare Could Save a Life” . . .”Remove Wrinkles with This Gross Trick” . . .”I Got Snow White! What Disney Princess Are You?” A friend joked that there should be a Facebook link entitled, “Take This Quiz to Determine How Self-Obsessed You Are!”

My grandmother doesn’t own a computer, but she knows just enough about Facebook to hate it. And really, can I blame her? I think most of us, Facebookers and non-Facebookers alike, would admit that there’s a problem with social media. The hard part is diagnosing where that problem lies, and how we as Christians should respond to it.

Prior to some of my recent studies in communication theory, I would have argued that Facebook is just a tool to be used for good or ill. After all, it’s what comes out of a man, not what goes into him, that makes him unclean. From this vantage point, “What’s on your mind?” is just a question we have to answer sincerely and scripturally before proceeding with social media. Set your minds on things above; now you’re qualified to use Facebook. It’s that simple . . . but is it? 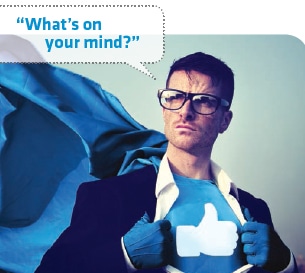 Over the past year I’ve interacted a lot with a school of communication thought known as “media ecology,” espoused by the likes of Marshall McLuhan, Neil Postman, and Jacques Ellul. Media ecology is just a fancy name for a simple idea: We shape our tools, but our tools also shape us. This means I have freedom to choose my tools for interacting with the world, but I need to realize that the tools I choose will unavoidably shape me as a result.

The media ecology perspective often garners intense criticism as a deterministic, almost superstitious belief that grants technology more power than humans. This is a valid criticism, but it reveals a fundamental mistake: confusing how technology acts with how it affects us. To be sure, our tools can’t follow moral codes or exercise free will; to use a familiar phrase, “Guns don’t kill people, people kill people.” But just because technology can’t make moral decisions doesn’t mean it’s neutral. Our tools affect the way we live in the world, sometimes more deeply than we’d like to believe. As Don Ihde points out, the “guns don’t kill people” argument (whether valid or invalid) seems to miss the fact that “the human-gun relation transforms the situation from any similar situation of a human without a gun.”2 I have the capacity to make a broader range of choices with a gun in my hand; to that extent, I am a different person.

To use a less extreme example, consider driving a car to get groceries instead of walking. At first glance, the effect of this switch seems simple. The car allows me to reach the store faster and with less fatigue than walking. But consider some of the other possibilities (or “affordances”) the car offers. I am able to carry more groceries home than I would be able to with my own two hands. I am also able to drive to multiple stores in order to get the particular ingredients I want. As a result, I will probably buy more food. I might also be pickier about the food I get. I might even give in to wastefulness or gluttony as a result. The car didn’t do anything to change my lifestyle, but it did change my lifestyle nonetheless.

If this seems painfully obvious, ask yourself why we so easily apply this principle to our physical surroundings, yet shy away from applying it in cyberspace. We all know that walking around with a stick of dynamite in your back pocket is a bad idea, regardless of how much you might protest that you’ll use it responsibly. So why are we so slow to recognize that Facebook—a network that has successfully overcome both space and time, a tool with the capacity to connect billions of people instantly—might have enough power to be even slightly dangerous? No, watching one funny cat video never killed anyone, but might the constantly-refreshing feed of social media be slowly draining our souls?

Now that I’ve explained the basic principle of media ecology, let me apply it to an aspect of Facebook that seems to have a particularly powerful impact on how we live our lives and communicate with other people.

Have you ever felt that nervous rush of adrenaline just before speaking to a crowd of people? Public speaking is often cited as one of the most feared activities known to man. At the very least, we probably wouldn’t describe it as fun.

As unpleasant as it may be, I tend to think this fear is a good thing. Public speaking reminds us that we have an obligation to make our audience’s time and attention worthwhile, and that our hearers will judge our character based on our words from the podium. We feel the pressure of a few dozen or a few hundred pairs of eyes. As a result, we feel accountable for saying something that’s worth hearing. But have you ever gotten this same adrenaline rush as you compose a Facebook status update? Do you feel nervous that people might not be interested in your views on the current political season or where you went for lunch? If you’re like me, the answer is probably no. Sitting in front of a laptop screen feels nothing like standing in front of a crowd. As a result, we feel strangely comfortable broadcasting vapid details about our day to a potential audience of thousands. Granted, our Facebook “friends” may not care much—they’re probably scrolling past our posts anyway. But if anything, doesn’t this further indicate that Facebook might be degenerating into noncommunication?

The apostle James urged Christians to “be quick to hear, slow to speak, slow to anger” (James 1:19). Unfortunately, Facebook turns this heavenly wisdom on its head. With Facebook, it is easy to speak, easy to become angry, but exceedingly difficult to listen. It seems to me that if this tool tends to oppose James’s model for Christian living, it will also hinder our ability to “receive with meekness the implanted word, which is able to save your souls” (v. 21).

Many other Facebook features could be analyzed in a similar way to evaluate their effect on the Christian life. I hope this brief exploration can point the way toward applying this principle to other aspects of our digital activity. But for now, I’d like to reflect a bit on trying to establish a biblical framework for understanding technology.

The debate over the nature of technology is ongoing and gargantuan, lending itself to multiple levels of misunderstanding and often placing its combatants in the pigeonholes of “technophiles” or “Luddites.” I can’t begin to treat the whole problem in a single article, but here is one biblical pattern that seems especially helpful in illumining our understanding of social media.

Isaiah 44 describes the folly of those who bow down to idols: they take common materials like iron or wood, they make something with them, and they fall down and worship what they have made. “No one considers, nor is there knowledge or discernment to say, ‘Half of it I burned in the fire; I also baked bread on its coals; I roasted meat and have eaten. And shall I make the rest of it an abomination? Shall I fall down before a block of wood?’” (Isa. 44:19 ESV). This is the pattern of idolatry throughout Scripture: not only bowing down to a physical idol, which is certainly part of it, but more generally worshiping the work of our own hands rather than the One whose hands made us.

If one studies the Old Testament with this pattern in mind, one finds that many of the things we would call “technological advancements” are built in implicit or explicit rebellion against God. The tower of Babel is an obvious example, but consider also the city built by Cain (Gen. 4:17) and even the fig leaves sewed together by Adam and Eve after their sin (Gen. 3:7). Each of these technologies was built in fear by sinful men, in an attempt to find safety and protection outside the realm of God’s love. Jacques Ellul reflects on how man’s perception of reality changed after the Fall in a beautiful passage in The Humiliation of the Word:

[Before the Fall,] human beings as limited creatures were fragile and weak, but placed in God’s love; this reality was seen within the context of eternal and perfect love. It was seen by God’s own sight. It was therefore a happy reality, and weakness was just one more joy, another perfection: that of the little child who buries himself in his father’s shoulder. He is glad to be weak, since his father is so strong. But now their eyes are opened. They see raw reality, with realism and accuracy: reality outside God’s love and therefore unpleasant, dangerous, and broken.3

This does not make technology inherently evil. God told Noah to build an ark; he told Solomon to build a magnificent temple; he gave us his inspired Word in the form of a book. But before we can understand how to interact with a world of technology, we must understand the true strength of the urge to idolize technology.

Because of the victory accomplished for us by Christ, we are freed from bondage to the futile things of this world. But we must carefully and consistently ask ourselves questions like these: Is our devotion to technology hindering our devotion to Christ? Might our reliance on technologies like Facebook reveal that our priorities are out of alignment? Do we derive our sense of meaning and satisfaction from our tools, or from our Savior?

In short, the dilemma of Facebook is multifaceted. The question “What’s on your mind?” may, in fact, be a good place to start looking for a solution. But perhaps the answer to that question is far deeper and more convicting than our social networks would like to have us think.             1. newsroom.fb.com/company-info, retrieved February 23, 2016. 2. Don Ihde, Bodies in Technology (Minneapolis: University of Minnesota Press, 2002), 93. 3. Jacques Ellul, The Humiliation of the Word, trans. J. M. Hanks (Grand Rapids: Eerdmans, 1985), 98–99. 4. See Jacques Ellul, The Meaning of the City, trans. D. Pardee (Grand Rapids: Eerdmans, 1970).