In the book of Exodus there is a conflict between Jehovah and Pharaoh. The conflict is really between Jehovah and the false gods of Egypt. The ten plagues as they are recorded in the book of Exodus represent ten mighty acts of judgment against Egypt and her false gods. The ten acts of judgment serve as a mere foreshadowing of the plagues that God will impose on the followers of Satan at the end of time. At the end of time God’s judgment on the earth will far exceed the ten mighty acts that God imposed on Pharaoh and all of Egypt. The plagues associated with the end of time are symbolically portrayed in the book of Revelation.

Likewise, the salvation that Israel experienced portrays the salvation of God’s people. This salvation was secured by Jesus Christ at the time of His first coming and will be experienced in fullness when Jesus Christ returns in glory and power. As we consider Exodus 7 and the first plague, we should ask ourselves about the significance of this plague. Why did God begin to judge Egypt by first striking the Nile river?

The ancient Egyptians considered the Nile river to be the primary source of life. As a result, the Egyptians worshiped the Nile. They personified the Nile River as a god with the name Hapi. This is illustrated through a hymn to the god of the Nile:

Hail to your countenance, Hapi, Who goes up from the land, who comes to deliver Kemit (Egypt). Who brings food, who is abundant of provisions, Who creates every sort of his good things. Who is enduring of customs, who returns at his due season, Who fills Upper and Lower Egypt. Everything that has come into being is through his power; There is no district of living men without him. 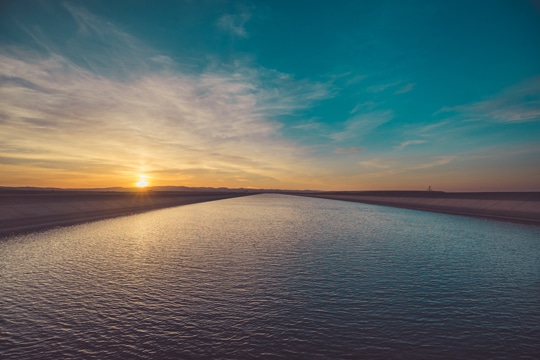 However one might seek to understand the significance of the first plague, it is clearly a significant moment! It is completely wrong headed to say, as one Bible commentator does, that the first three plagues were little more than a softening up process, a major nuisance but little more.

This plague follows the event in which Aaron threw his staff to the ground and it became a snake. His snake then consumed the snakes that Pharaoh’s magicians had produced through their magic arts. The fact that Aaron’s snake destroyed all the snakes that Pharaoh’s magicians produced was a sign portraying the destruction of Egypt and the supremacy of Jehovah. This first plague marked the beginning of Egypt’s demise. Judgment has come upon the house of Pharaoh.

There is a parallel between this plague and the death of the Egyptian army in the Red Sea. Both the beginning and the end of Israel’s deliverance involve water. Both events are mighty acts of God and both events use water as a source of judgment. In other words, the first plague and the Red Sea frame the story of deliverance. This is certainly consistent with the New Testament concept of baptism as an act of judgment and an act of salvation. The waters of baptism are the waters of judgment for everyone that dies in unbelief. But for everyone that believes, they are the waters that purify. The same waters that portray judgment are the same waters that portray salvation. This is also consistent with the Genesis flood. The same waters that destroyed evil men purified the earth. The difference was where you stood, whether you were in the ark or outside the ark.

Another reason why this was the first plague has to with what has already taken place. In Exodus 1, Pharaoh commanded all the Hebrews to cast their infant sons into the Nile. He tried to turn the Nile into an instrument of death against the Hebrews. But now, by the command of God, the Nile had been turned against Egypt.

When Jehovah turned the waters of the Nile into blood, all the fish died and the water was no longer fit for human consumption. This was a great hardship for the Egyptians. They depended on the Nile for food, irrigation, and drinking water. The very thing that had been a source of life was now a source of death.

Ironically, the very instrument thatPharaoh had tried to use againstGod’s people was now turnedagainst Egypt. And Pharaoh remained powerless to change this; he did not have the ability to undo what God had put in place.

Judgment begins with the Nile because Pharaoh had already used the Nile as an instrument of judgment against God’s people. Since Pharaoh had already used the Nile in this manner, it seems fitting that God would first strike the Nile and use it as an instrument of judgment. By so doing, God would demonstrate His sovereignty over the Nile and over Pharaoh. The Nile is the servant of Jehovah, not the servant of Pharaoh.

The first plague was both a retribution for the previous attempt to kill the infant males of Israel, and it was a preview of Egypt’s ultimate fate. The waters of the Nile will no longer bring security and prosperity to Egypt. Through the instrument of water, the Red Sea, the elite males of Egypt will perish. Their bodies will wash up on the shores of the Red Sea just as Pharaoh had intended for the infant males of Israel to wash up on the banks of the Nile. Judgment and deliverance begin and end with the use of water.

By way of application the entire plague account is a mere foreshadowing of the plagues that will strike the followers of Satan at the end of time. This first plague is prominent in the description of the judgment associated with the end-times. The apostle John makes use of this plague in Revelation 16:3-4 when he describes the second and third bowls as an act of judgment.

“The second angel poured out his bowl on the sea, and it turned into blood like that of a dead man, and every living thing in the sea died. The third angel poured out his bowl on the rivers and springs of water, and they became blood” (Revelation 16:3-4). The similarities between this description and the account in Exodus are obvious. The only real difference is the extent and the intensity of the plagues in Revelation are much greater than the plagues in Exodus. The second and third bowls in Revelation includes the sea and all the waterways of the earth. Just as all of Egypt was covered in blood, in the end-times all the earth will be covered with blood, but the devastation will be much greater than what Egypt experienced.

Still another angel, who had charge of the fire, came from the altar and called in a loud voice to him who had the sharp sickle, “Take your sharp sickle and gather the clusters of grapes from the earth’s vine, because its grapes are ripe.” The angel swung his sickle on the earth, gathered its grapes and threw them into the great winepress of God’s wrath. They were trampled in the winepress outside the city, and blood flowed out of the press, rising as high as the horses’ bridles for a distance of 1,600 stadia. (Revelation 14:18-20).

At the end of time, God’s wrath will be poured out on the earth. Every man will experience either God’s judgment or His salvation. Just as the turning of water into blood in Exodus was a just retribution because Pharaoh had commanded the Hebrews to destroy their infant sons, likewise John describes the turning of the Sea and the waterways into blood as a just act of retribution against the seed of the serpent for shedding the blood of God’s people and His prophets.

Satan has been conquered. He was cast down from heaven with a third of the angelic host, but Satan continues to be active in this age. The conflict between the two seeds continues in this age, but the conflict takes place according to the will of God. We should never think that God is any less sovereign now than He was in the book of Exodus. We can rest in the knowledge that this world is never outside of God’s control. We can also rest in the knowledge that God’s judgment is just.

Then I heard the angel in charge of the waters say: “You are just in these judgments, you who are and who were, the Holy One, because you have so judged; for they have shed the blood of your saints and prophets, and you have given them blood to drink as they deserve.” And I heard the altar respond: “Yes, Lord God Almighty, true and just are your judgments. (Revelation 16:5–7)

In conclusion, you can be assured that God rules over the earth just as he ruled over Egypt in the book of Exodus. It is a mistake to think of the Exodus as a historical fact that has no bearing on your life. If you call upon Jesus Christ as your Lord and Savior, then you know what it is to be led out of sin and darkness. You can rest in the knowledge that your salvation has already been secured by the finished work of Christ. You can be assured that you will know the salvation of your God in its perfected form when he returns in glory as the great Judge and as your Savior.

Your life ultimately will be defined either by God’s judgment or by God’s salvation. Peter wrote “Since everything will be destroyed in this way, what kind of people ought you to be? You ought to live holy and godly lives as you look forward to the day of God and speed its coming. Therefore, dear friends, since you already know this, be on your guard so that you may not be carried away by the error of lawless men and fall from your secure position. But grow in the grace and knowledge of our Lord and Savior Jesus Christ. To him be glory both now and forever! Amen” (2 Peter 3:17-18).