In Luther’s refutation of Erasmus, “The Bondage of the Will,” Luther attacked the theological impulse behind Erasmus’ defense of free will. That impulse, Luther believed, undermined the Bible’s authority and distorted the character of God as revealed in the Bible. Luther insisted on strong assertions of Christian truth against the tolerant and skeptical approach of Erasmus. 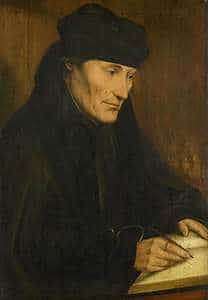 Erasmian impulse is not unique to the sixteenth century. That spirit is alive and well today among theologians that see themselves as evangelical and Reformed. Consider some of the current thinking on the Bible and God.

On the Bible Luther said that the Bible was clear in itself, but was sometimes unclear to us because of faults in us. The first fault he mentioned was laziness.

Many Christians are lazy today. They say that the Bible is not clear so that we must rely entirely on Biblical scholars. In many discussions in recent years about a variety of theological topics, I have discovered that people have not even tried to study an issue for themselves, but are very. content simply to rely on the conclusions of some professor. Even if you point out that the work of that professor has been rejected by several other professors on the basis of clear evidence, they are unimpressed. They have their professor who says what they want to hear and they will stick with him.

This attitude bears an interesting resemblance to the seventeenth-century Jesuit ethical theory called probabilism. This theory stated that if one learned doctor held a particular view, even if rejected by all other learned doctors, a confessor could follow the views of one learned doctor. This theory allowed for moral laxity and made some Jesuits very popular as confessors. This theory was finally condemned by the Roman Catholic Church. But something like it seems to have developed in evangelical and Reformed circles.

Our modern probabilism was certainly not learned from the Jesuits. It rather comes from a culture that has little interest in any claims to exclusive truth and is determined to find a rationale for what it wants to believe. For many Christians such an attitude is born basically of laziness. Such lazy Christians have lost a passion for God’s truth.

Luther’s second contention about the Erasmian impulse on the Bible is the misuse of reason to judge the Bible. Today also many misuse reason allowing it to determine how the Bible functions for Christians. The radical application of the impulse today embraces the idea of the deconstruction of texts and argues that texts mean only what readers conclude that they mean. Therefore the Bible does not have any objective meaning at all and its meaning derives from what readers find in it for themselves. This attitude exceeds even the serpent in the garden of Eden in its cleverness. The serpent asked, “Did God say…?” Deconstructionists say, “God could not have said….”

A somewhat less radical application of the impulse is to allow reason to distinguish what in the Bible is important and directs us from what is unimportant and does not bind us. This distinction is often expressed in terms of whether a teaching of the Bible is a salvation issue or not. But the presumption to judge which parts of the Bible are important is profoundly unchristian. The sons of Aaron thought the type of incense used in the tabernacle was not important. Uzzah thought whether he touched the Ark of the Covenant or not was unimportant. Ananias and Sapphira thought that telling one lie was unimportant. They were all very wrong (whether they were saved or not!). Reason (or our sense of what is right) is not a reliable judge of the Bible and tends simply to tell us what we want to hear.

Luther’s third observation about the Erasmian impulse was that it evaded the clear meaning of the Bible by redefining the Bible’s words and contexts. The process of redefinition has happened again and again in the controversy over women in ecclesiastical office. Every text that relates to that issue has been examined and turned on its head by proponents of women in church office. Against the best evidence words have been wrenched to new meanings (e.g., “authority” in I Tim. 2:12) and speculative new contexts for passages of Scripture have been invented (e.g., the suggestion that I Tim. 2 is only local, temporary advice to the Ephesians because of some special problem there). Luther was adamant that the Bible was clear and so must we be. Dr. J. Gresham Machen in his defense of the Bible once observed that words do not “wobble.” Such a statement in our day seems naive, because so many have adopted attitudes towards words that not only make them wobble, but make them wax noses. Yet Machen and Luther were right. The sovereign God who created words can and does use them with clear and effective meaning to reveal Himself and His truth.

Luther insisted that the clarity of the Bible was inextricably connected to the character of God. If we do not know what the Bible teaches, then we cannot know the true God. Today the Erasmian impulse is eroding our knowledge of God and His character.

The Erasmian impulse again today is attacking the Reformation understanding of the power of God. Again God’s power and activity in salvation is being limited by false teaching about man’s power. Consider the recent statement called “Evangelicals and Catholics Together.” That statement suggests that there are no basic differences between Roman Catholics and Evangelicals on grace and faith. The statement implicitly rejects the importance of the great Reformation doctrines of grace alone and faith alone. Man—his decisions and his actions -again stand at the center. A truly God-centered theology is abandoned.

This impulse also attacks the power of God in its teaching on the final judgment. The reasonable theology of the Erasmians tends to insist that a God of love will not send anyone (or at least only a very few) to hell. God’s holiness and justice evaporate in the heat of an unbiblical understanding of love.

Not only the power of God suffers at the hands of this impulse, but so also does His person. God Himself must be redefined. The language used for God must be feminized and the Trinity become Parent, Sibling and Spirit. But such radical changes are not enough. “Evangelical” theologian Clark Pinnock embraces a theology called process, declaring that God has no fixed, immutable nature. God is always rather in the process of change. Process theology intends to suggest that this changing God is more sympathetic, understanding and responsive. In reality such a god is simply unreliable. The promises of God in Christ in a process theology can count for nothing.

If Luther were writing today, he would be appalled at the extremes to which the Erasmian impulse has gone in theology. But he would not be surprised. He knew that the Erasmian impulse opened the door to the most radical distortions of the Bible and of God. He knew that only strong assertions of Biblical truth would preserve the Gospel. He knew that the church of Jesus Christ would flourish only as God raised up strong preachers who would not compromise the Bible’s message. May God bless His church in our day with leaders who will courageously make the strong assertions of God’s Word.

Dr. Godfrey, editor of this department, is President of Westminster Theological Seminary in CA.