Last month the author disclosed the Eastern Orthodox contention that although man bears responsibility for his personal sins, he does not bear the guilt of Adam’s sin. This has ramifications for the Eastern Orthodox teaching concerning the person and work of Christ and its application to the human condition.

This month we will examine the Orthodox soteriology, or doctrine of salvation. As we do so, we will find that Eastern theologians employ much rich, biblical imagery which Reformed Christians will find useful and edifying. At the same time, we will also find important themes missing or neglected in their soteriology. We will try to give due attention to both and formulate a Reformed analysis of Orthodox thinking in this area. To accomplish this, we will focus first upon the Orthodox view of Christ and what His work accomplished, and, second, upon how people come to possess this salvation and of what this salvation consists.

THE PERSON AND WORK OF CHRIST

We turn, then, to the Eastern theology of Christ and His work. In regard to the doctrine of the person of Christ, East and West share all the same foundational beliefs. Orthodoxy believes, as we do, that Jesus Christ is the eternally begotten Son of God, of the same divine nature as the Father. It confesses that He became incarnate by the virgin Mary, and that the incarnate Christ was truly God and truly man, one person in two natures. In fact, to say that the East shares these beliefs with us may be giving it less than its due. For in the early church, it was predominantly theologians in the East who pushed forward advancements in Christological doctrine, and most of the main players in the Ecumenical Councils were from the Greek-speaking churches. Though the West did participate in these councils and did at times make important contributions, the West owes the East a large debt for its theological creativity in this area.

Despite the great measure of agreement between East and West on this topic, we are not yet ready to move on to a discussion of the work of Christ. We must emphasize at this point the tremendous theological importance which Orthodoxy places on the incarnation. Though the West also recognizes its importance, we tend to view the incarnation as something of a means to an end. More specifically, we often look at the reality of God becoming man as little more than a necessary prerequisite for the accomplishment of redemption in the crucifixion and resurrection. In the East, however, the incarnation is viewed much more as an end in itself. Orthodoxy does not skip quickly from the incarnation to a discussion of Christ’s saving work. Rather, it pauses over the incarnation, meditates on it and marvels at it. Orthodox theologians, while at their best never ignoring the necessity of Christ’s work, at times almost speak as if the incarnation itself accomplished our salvation. They often speak of human nature as itself some sort of independent entity, and of the incarnation as God’s embracing of this human nature. Therefore, the Word becoming flesh has cosmic implications. When Jesus became man, human nature as a whole—perhaps even all of creation was brought into some sort of union with God. In the incarnation, the human and the divine were brought back to their pre-fall communion, and human nature was restored to its true position as the imagebearer of God. These words from John Meyendorff indicate the way Orthodox theologians speak of the incarnation:

Moreover, the fact of the Incarnation implies that the bond between God and man, which has been expressed in the Biblical concept of the “image and likeness,” is unbreakable. The restoration of creation is a “new creation,” but it does not establish a new pattern, so far as man is concerned; it reinstates man in his original divine glory among creatures and in his original responsibility for the world. It reaffirms that man is truly man when he participates in the life of God; that he is not autonomous, either in relation to God, or in relation to the world; that true human life can never be “secular.” In Jesus Christ, God and man are one; in Him, therefore, God becomes accessible not by supers eding or eliminating the humanum, but by realizing and manifesting humanity in its purest and most authentic form (italics his).10

What place is there then, for the saving work of Christ? In Orthodoxy theology, there is generally quite little said about the atonement, which is often the focus of Western reflection on Christ’s work. Instead, the great emphasis falls upon Christ’s work of conquering Death and Satan and emerging victorious over them in His resurrection. His dying and rising again are not ignored, but they are not seen primarily as a substitutionary atonement for sins resulting in a judicial pardon of sin and declaration of righteousness, as they generally are in Reformed thought. 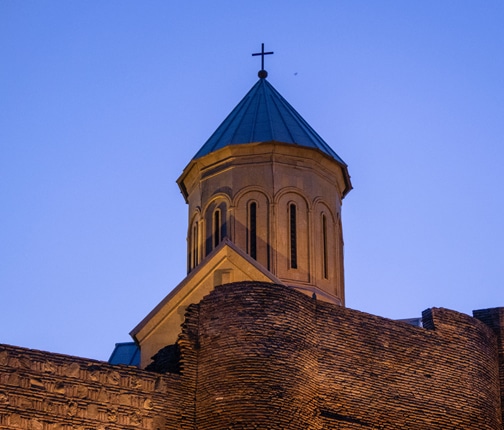 Whereas Reformed theology often uses imagery of a courtroom to describe the work of Christ, Orthodox theology would rather use imagery of a battlefield, of a fight to the death. Athanasius, for instance, spoke of death reigning through Satan, of Christ struggling and warring against Satan, and of His triumphing over death by His own death on the cross. Christ bound Satan (who is called a “tyrant”) hand and foot, and Christ’s resurrected body was His “trophy of victory.”11 The imagery used by Athanasius is graphic and moving. The important 8th century Orthodox theologian, John of Damascus, also used such imagery. In regard to Christ, he writes:

He was put to the test and He conquered that He might gain for us the victory and give to our nature the power to conquer the Adversary, so that through the very assaults by which the nature had been conquered of old it might conquer its former victor. 12

(Notice here again how human “nature” is spoken of as some sort of concrete entity.) Later in this same work John changes his imagery slightly, but the ideas are similar:

Wherefore, then, death approaches, gulps down the bait of [Christ’s] body, and is pierced by the hook of the divinity. Then, having tasted of the sinless and life-giving body, it is destroyed and gives up all those whom it had swallowed down of old.13

Although this imagery we have been surveying above is undoubtedly the favorite imagery employed by Orthodox theologians to describe the work of Christ, they do not completely ignore terms which are more commonly used in Reformed theology. Athanasius also referred to Christ as our “substitute” and “propitiation,” and he spoke of Christ as fulfilling our “debt.” John of Damascus called Christ’s death a “sacrifice” made to win our “redemption.” Yet none of these terms take on any real importance in Eastern theology. Why is this? Surely much of it has to do with the Orthodox view of the consequences of Adam’s sin, which we discussed above. Since Orthodox thinkers focus their attention on the corruption and mortality that comes from Adam, Christ’s work is portrayed as doing away with this corruption and mortality. Death, the ever present enemy, must be destroyed, and Christ accomplishes this task. But because guilt is not seen as a significant problem in Orthodox theology, there is also little attention focused upon Christ’s work as a sacrifice, substitution, or propitiation, since these ideas are primarily connected with Christ’s bearing guilt on our behalf. The converse is true of Reformed theology. Since the imputation of Adam’s guilt plays a critical role in its understanding of the consequences of sin, it also places great importance on Christ’s vicarious, substitutionary atonement, by which the punishment due to our guilt is laid upon the Lord.

What ought Reformed Christians to make of the Eastern Orthodox presentation of the person and work of Christ? There is undoubtedly much material to appreciate. In regard to their reflections on the incarnation, that is, on the person of Christ, we could probably learn a great deal from Orthodox theologians. Perhaps we ought to pause a moment longer contemplating the awesome reality of the eternal God taking on human flesh. Perhaps we too quickly move on to other doctrines rather than fully think through the implications of the incarnation. We may well not wish to go as far as they do in speaking of “humanity” as a whole being united with God in the incarnation, but it would certainly be worth our time to seriously consider Orthodox thinking on this matter.

There is also much to appreciate in the Orthodox portrayal of the work of Christ. The imagery of Christ as the victorious hero conquering the tyrannous Death and Satan is not only exciting, it is also quite biblical. To offer but one New Testament example, Hebrews 2:14–15 says: “Since the children have flesh and blood, he too shared in shear humanity so that by his death he might destroy him who holds the power of death—that is, the devil—and free those who all their lives were held in slavery by their fear of death”(NIV). We might also think of all the Old Testament stories in which salvation in Christ is typologically portrayed by the salvation of the people of Israel through destruction of the enemy (e.g. the drowning of the Egyptians in the Red Sea and the conquest of Canaan). The first Question and Answer of the Heidelberg Catechism itself speaks of Christ freeing us from the tyranny of the Devil. Certainly there is much to work with here, and Reformed preachers and teachers would do well to explore these themes further.

And yet, we cannot overlook the fact that in giving relatively short shrift to the biblical teaching that Christ’s death was an atoning sacrifice, Eastern Orthodoxy has downplayed a crucial aspect of the doctrine of salvation. It is imperative that Christians recognize that we bear guilt that must be atoned for, and that Christ’s sacrifice on the cross accomplished just this: “But he was pierced for our transgressions, he was crushed for our iniquities; the punishment that brought us peace was upon him, and by his wounds we are healed” (Isaiah 53:5) (NIV). It is imperative that Christians acknowledge that they have not matched the standard of obedience demanded by God, and that Christ’s obedience met the standard on our behalf: “For just as through the disobedience of the one man the many were made sinners, so also through the obedience of the one man the many will be made righteous” (Romans 5:19) (NIV). These are not matters that Eastern Orthodoxy can ignore if it wishes to be faithful to the biblical record.

Mr. Van Drunen has a Master of Divinity degree from Westminster Theological Seminary in CA. He is a student at Northwestern University School of Law in Chicago IL and at Trinity Evangelical Divinity School in Deerfield IL. He is a member of the Western Springs CRC in IL.