In the book of 1 Chronicles we read some interesting history. In Chapter 13 we read that King David gathered all Israel together to bring the Ark of God back to Jerusalem. They put it on a cart and proceeded to go to Jerusalem. But on the way something went wrong. One of the oxen stumbled and a man named Uzza put out his hand to hold the ark. This, we are told, angered the Lord and He took Uzza’s life. This angered King David and made him very afraid of the Lord. They stopped the procession and the ark stayed at the home of Obededom.

No doubt King David reflected on this event wondering why this had happened. He came to see that he was the cause of Uzza’s death. I suspect he got a cart to carry the ark because they had seen how wonderfully this had worked for the Philistines. They had hitched untrained cows to a cart. While lowing for their calves those very same cattle took the cart to the place the Philistines wanted it to go. In this way the Philistines would know the God of the Hebrews was guiding the ark. David evidently judged that if it worked so well for the world why not for the Lord’s people. No doubt he came to see that his mistake was a very serious one. He had forgotten and disobeyed the Lord’s command that only Levites were to carry the ark.

This event certainly has a lesson for us. We, too, are called to serve the Lord in obedience to His will. That is the only way we can expect His blessing. One song expresses this beautifully, “When we walk with the Lord, in the light of His Word, what a glory He sheds on our way. While we do His good will, He abides with us still, and with all who will trust and obey.” (New Christian Hymnal, edited by Rev. H. J. Kuiper)

There is a similar event in Scripture where two of God’s children are severely rebuked and corrected by the Lord. Aaron and Miriam said to Moses that they had as much right to speak for the Lord as he did. No doubt there was some jealousy as family members were involved in this complaint (Numbers 12:1) The Lord reminded them of Moses’ very special calling and communion with the Lord. It was a very sinful mistake they made and Miriam especially paid dearly for it. 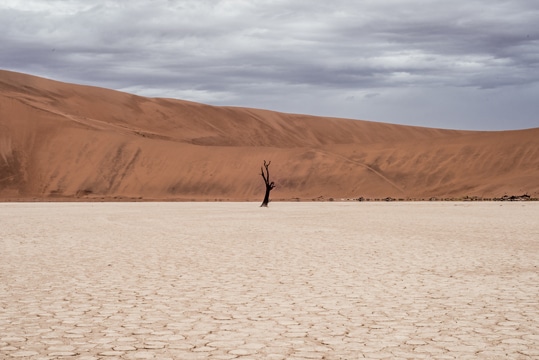 Are conditions any different today? Scripture clearly reveals to us that the whole Bible was written only by men, and that only men were officers and instructors for God’s people. Jesus only choose men to be his disciples. As if this evidence isn’t sufficient the Lord spells out clearly and emphatically that elders (bishops, overseers) should only be men able to be both instructors and rulers over God’s people. Similar requirement are given for deacons (1 Tim.3). We read in Acts 6:3 that sever men were appointed to serve the needs of the widows. It is important that only men are to be officers in God’s church. As if this were not clear enough it is repeated in Titus chapter one.

Very unfortunately this clear revelation of Scripture has been set aside by many in recent years. We have many Reformed churches who have decided that woman can also be ministers, elders, and deacons in the church. This follows a similar reasoning like Aaron and Miriam used. They maintained they had as much right to speak as Moses.

They were rebuked by God and as mentioned before, Miriam was severely punished with leprosy. Will the Lord punish us today, too? He most decidedly will and does. In the 1960’s the Gereforemeerde Kerk (Christian Reformed Church) in the Netherlands introduced the practice of ordaining women as office bearers in the church. We visited the Netherlands for the first time in 1985. We saw how far the Gereforemerde Kerk had fallen in those years. They had introduced special stories for the children before they left the church service for some kind of service of their own. The sermons for the adults were rather dead and the church attendance very low. It was very regrettable to see. Our relatives realized what was taking place. What could one do in such a case?

Ten years later we went back to the Netherlands. Conditions in the churches were most pathetic. We attended one church which still held two services on Sunday morning when we had attended ten years earlier. It was no longer being used. We were instructed to attend an Herrforde Kerk (Reformed Church) on the same block. The service was attended by both Gereformeerden and Herrformde members. This was part of the program called “Samen op Weg,” which in English is “Together on the way.” The church was packed full but was about half the size of the Gerefermeerde Kerk.

There were, if I remember correctly, four female deacons and one male deacon. The people stood up when the minister came into the sanctuary. I saw only two women leading in the minister. The first woman opened the service. The sermon the minister had was clearly spoken but was a very liberal message. It was said that God is the father of all mankind and we are therefore all brothers and sisters. There was no service in the afternoon. Very, very sad indeed.

How about the Churches who have introduced this same practice among us? Do we see this same thing taking place in them? We certainly do! We not only see women serving as ministers, elders and deacons, we also see the sad decline in attendance. Most evening services are very poorly attended. In the summer some of the larger churches join services so as to have enough for a decent service. Young people are especially missing. Some churches have only one service, others have Bible study instead of a service.

Yes, many of these churches are concerned about this. They realize something must be done to save the church. Many seek to make the service more appealing, especially to the young people. One colleague said to me, “We are in competition with the entertainment of the world. If we fail to have entertainment in our services we will loose our young people.” So some add songs by choirs, or solos, or numbers by various musical instruments, or even plays by children or young people. Beside this, children can leave a service before the sermon begins. Then, so it is reasoned, they get something that at their age they can understand and benefit from.

The introduction of these practices are completely contrary to God’s Word and most destructive. Any church that sets God’s Word aside is headed for destruction. We see this happening in many churches today. They are playing church. Everything seems to be done to please the members while everything should be done in obedience to God’s Word.

We sing a beautiful song in our church services at times, that is number 324 in our Psalter Hymnal, “God Himself is with us, let us now adore him, and in awe appear before Him. God is in His temple, all within keep silence, prostrate lie with deepest reverence.”

As mentioned the reason for letting children out of the service is to give them something they can understand on their own level. This is an insult to the Holy Spirit! On the one hand we are called to gather as covenant families. On the other we must trust the Holy Spirit to give our children a real blessing while in church. Dr. A. Kuiper emphasized how the Holy Spirit would instill in children a due reverence for God’s service by observing the church at worship. In my early years I experienced this and am happy our parents took us to church to attend the whole service. In our early years most of the services were led by elders. Some were good readers others poor readers. All the sermons were long and we did not like sitting still that long but the Holy Spirit blessed it and used it for His glory.

What are we saying to our children when we remove them from the worship service? What will the impact on them be in future years? Can you blame young people when they only come once to church, or not at all? Have we not left the impression that going to church is not that important? And have we lost the wonderful and great blessing of being gathered in the presence of and under the great blessings that our heavenly Father bestows on us as covenant families?

When we fail to instill this wonderful truth in our children we lose the beauty of being united as covenant families. Jesus rebuked the disciples for considering children as not belonging in the circle of those who met with Him. He said to them, “Suffer the little children and forbid them not to come to me. For of such is the Kingdom of heaven.” (Math.19:14). That holds true the same way today. Where God’s people meet in worship there the children belong as members of a covenant family.

How wonderful it would be to see all churches return in obedience to God’s demands for meeting as covenant families in our Sunday services.

Rev. Cecil Tuininga is an emeritus pastor in Edmonton, Alberta where he is an active member of the United Reformed Churches in North America.