In the midst of his letter to the Ephesians, the apostle Paul drew attention to the prayer that he of­fered for the saints of God in Ephesus, expressed in one long sen­tence.

“For this reason I bow my knees before the Father, from whom the whole fam­ily in heaven and on earth derives its name, that he would grant you, according to the riches of his glory, to be strengthened with power through his Spirit in the inner man, so that Christ may dwell in your hearts through faith, and that you, being rooted and grounded in love, may be able to comprehend with all the saints what is the breadth and length and height and depth, and to know the love of Christ which surpasses knowledge, that you may be filled up to all the fullness of God” (Eph. 3:14-19). 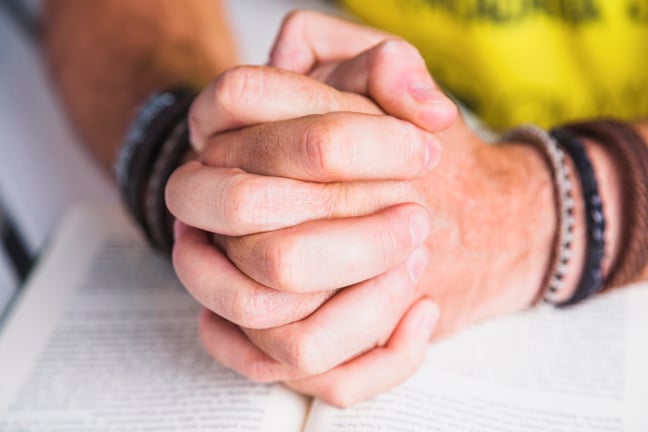 As Paul found himself upon his knees before God, he reflected upon the reason for such a posture of prayer and humility before the Almighty. Why did he bow his knees before the Father?  Unto what cause did the apostle attribute his prayer of intercession?  In the thinking of Paul, it was God Himself who had put him on knees of grati­tude and supplication by a loving conquest of sovereign grace.

Prayer and the Triumph of Grace

Paul had already acknowledged within the same epistle that his pre­vious life had been unacceptable to the Almighty, meriting even the wrath of God (Eph. 2:3).  The deci­sive change in his own life—bring­ing him from death in his transgres­sions to life in Christ—could only be traced to the wonders of mercy, love, and grace (Eph. 2:4-5).  But for Paul the favor of God over­flowed the deep channels of grace that flow into the lives of all the people of God.  To him “the very least of all the saints” was given the added grace and privilege of proclamation, “to preach to the Gentiles the unfathomable riches of Christ” (Eph. 3:8).  He was “Paul, an apostle of Christ Jesus by the will of God” (Eph. 1:1).

It was divine grace that prompted gratitude unto God, which issued forth in service in behalf of the church.  This then was the reason for his prayer.  Paul loved God and His people.  His prayer was an act of love, a word of intercession for the Ephesians who had come to “faith in the Lord Jesus” and who were known for their “love for all the saints” (Eph. 1:15).

Paul rendered homage to the Fa­ther.  His knees bent.  His head bowed in humble supplication.  His thoughts filled with the mystery of the Trinity.  He petitioned the Fa­ther that we be strengthened in the inner man through the Spirit in order that we may advance in our knowledge of Christ.

Even as he mused upon the Trinitarian Godhead, he poured out his concerns for the saints in Ephesus.  Paul ever viewed the Christian life as the seedbed in which there would be the cultiva­tion of faith, hope, and love (1 Cor. 13:13)—what medieval the­ology would later expound as the three theological virtues, the fruit of grace and not natural ability.  In this prayer, imbedded in his letter to the Ephesians, we find the same three longings—that the saints in Ephesus would have faith as the appropriate response to gospel proclamation, love as the foundation of their new life in Christ, and hope directed to that future of complete conformity to the moral image of Christ.

As a son of God by the grace of adoption, Paul came to the Father in a position of adoration and thanksgiving.  Bowing himself in lowliness before him, he recog­nized at the same time that the Father has a household and that he, Paul, was one child among an innumerable multitude in the vast household of God (Eph. 2:19).  It is one cosmic family, many of whom are already in heaven and the rest of whom are still on the earth.  The whole family belongs to the Father.  They are His chil­dren.  They bear His holy name. The bonds of love and brother­hood within the family of God are the matrix out of which this prayer ascends into the presence of the Heavenly Father.

What exactly did Paul pray for? What concern did Paul have for the flock of God committed to his care?

The great desire that Paul had for the Ephesians was that they would saturate themselves in the knowl­edge of the love of Christ.  He longed that they would be gripped by the love that Messiah Jesus has for man in his misery and sin.

He recognized though that such a spiritual comprehension is contin­gent upon the presence of God in our lives.  The Spirit and Christ Himself must powerfully dwell in the inward man, even in the heart of the believer.  This then was the foundational petition of the apostle—he entreated God that we his readers, believers in Christ, would increasingly experience the powerful presence of Christ and the Spirit in our lives.

An increase in their mighty pres­ence would come only “through faith” (Eph. 3:17)—which only “comes from hearing, and hearing by the word of Christ” (Rom. 10:17).  Thus the sequence of bless­ing begins with proclamation.  The Word of God must be proclaimed. This preaching must be heard with faith in the heart.  Such belief brings a renewed manifestation of the di­vine.  The presence of God comes once more with power.  The be­liever experiences afresh the pro­found mystery, “Christ in you, the hope of glory” (Col. 1:27).

The potent indwelling of Christ in the heart is transformative.  It changes the life.  Love permeates. Benevolence reigns.  Such folk are changed.  They are “being rooted and grounded in love” (Eph. 3:17). They love God, the church, and even their enemies (Matt. 5:43-48).

It is this kind of person, and only this kind of person, who is quali­fied—morally able—to apprehend the love of Christ.  If we would begin to comprehend to some mea­sure this multidimensional love of Christ—even the elements of its breadth and length and height and depth—we must have the pervasive indwelling of Christ in our hearts, and we must have love at the base of our lives.

It is no wonder that Gregory Nazianzen commented, “Not to every one…does it belong to phi­losophize about God; not to every one; the Subject is not so cheap and low.”  He went on to say, “It is permitted only to those who…at the very least are being purified.”  He added this warning: “For the impure to touch the pure is, we may safely say, not safe, just as it is unsafe to fix weak eyes upon the sun’s rays” (The First Theological Oration XXVII).

If we will follow the Lord’s direc­tion in this prayer of Paul, we will find an expansion in our knowledge.  If we will give ourselves to the means of grace—to hearing the Word of God and receiving the sac­raments with faith, to prayer and fellowship with the saints—we shall experience the nearness of Christ and the Spirit, indeed their enabling presence in our hearts. When love increasingly saturates our lives, we shall then grow in our knowledge of that which surpasses knowledge—the supreme manifes­tation of the love of Christ in which He “gave Himself up for us” (in our place) “an offering and a sacrifice to God” (Eph. 5:2).

Here Paul reminds us that even as the evil powers of this age laid their vile hands upon an innocent man and did away with Him, the Lord Jesus endured the acts committed against Him with His gaze fixed upon heaven.  He was self-con­sciously giving Himself to God as an offering and a sacrifice in our stead.  It is this reality and the love that impelled it that must grip our minds and hearts so that we can be mastered by its conquering power.

The End of the Gospel

The life of the believer—indwelt by God, suffused with love for others, basking in the warmth of the love of Christ—has an ultimate end that entails blessing beyond measure. Paul draws our attention to this in the final clause of his prayer: we shall “be filled up to all the fullness of God.”

We are not complete in ourselves. We have great need.  That which fills God needs to be found in us. This does not mean, of course, that we will become God.  As Augustine said, “To be a partaker of God is not the same thing as to be God” (The City of God XXII.30).  It does mean, however, that we “become partakers of the divine nature” (2 Pet. 1:4).  This, indeed, as Calvin remarked, is “the end of the gos­pel.”  Its purpose is “to make us eventually conformable to God” (Commentary on 2 Peter).

Luther concurred with this per­spective, even while expanding upon it.  Preaching on the Incarna­tion in a Christmas sermon in 1514, he declared, “Thus power becomes powerless so that weakness may become powerful.  The Logos puts on our form and pattern, our image and likeness, so that it may clothe us with its image, its pattern, and its likeness.  Thus wisdom becomes foolish so that foolishness may be­come wisdom; and so it is in all other things that are in God and in us, to the extent that in all these things he takes what is ours to him­self in order to impart what is his to us” (WA 28).

We rejoice that our ultimate end by divine predestination is conformity to the moral image of the Son of God (Rom. 8:29).  Yet even now in this life it is the intention of God that His moral excellencies will be found within His household among His children by the sanctifying work of the Spirit.  May we pursue the holiness which God gives us. Unto that end may we embrace the apostolic prayer and make it our very own.