This year marks the 60th anniversary of J. Gresham Machen’s death on January 1, 1937. Machen was one of the most prominent scholarly defenders of the Christian faith in its conflict with modernism in the early part of the twentieth century. He founded the Orthodox Presbyterian Church (OPC) and Westminster Seminary in Philadelphia, PA. Early on, the Christian Reformed Church recognized and lauded his achievements, thereby demonstrating the common bond they shared with Machen. Knowing what we do about the deterioration of the Christian Reformed Church raises nostalgia as we read the following words written by Dr. Machen in the Presbyterian Guardian, 1936.

“The grass withereth, the flower fadeth: but the word of our God shall stand forever.” —Isaiah 40:8. 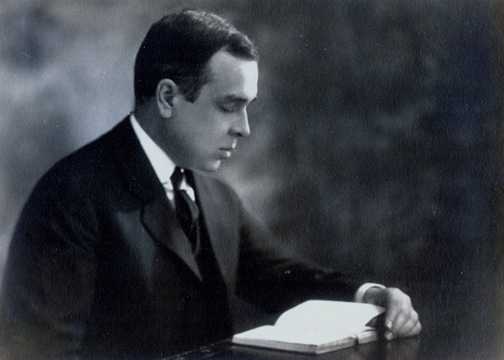 From no ecclesiastical body in the whole world could greetings have been more welcome, both because of the deep debt of gratitude that we already owe to the Christian Reformed Church—I need only mention the fact that that church has given to Westminster Seminary R. B. Kuiper, Cornelius Van Til and N. B. Stonehouse—and also because of the noble testimony which that church has carried on in the defense and propagation of the Reformed Faith. Fraternal greetings coming from such a quarter as that over-balanced by far all the detractions and opposition which have come to us from other sources, and make us feel anew that all the years of struggle through which we have passed were well worth while if now at length we are members of a church that is truly Reformed and that is worthy even in slightest measure to receive the right hand of fellowship from such a truly Reformed church as the Christian Reformed Church unquestionably is.

I am not going to make any attempt just now to review the splendid history of this ecclesiastical body that has just sent us greetings. I am not competent to do so; and even if I were more competent than I am I doubt whether it would be necessary. The faithfulness of the Christian Reformed Church is widely known, and any mere general words of appreciation on my part might seem almost like an impertinence.

What I do want to do, however, is just to mention, though in a necessarily desultory way, a few of those things about the life of the Christian Reformed Church which have kept it from falling away into the dominant Modernism and have been the instruments in preserving its truly Christian witness.

1. Separation for the Sake of Faithfulness Like the Presbyterian Church of America, the Christian Reformed Church was formed through a separation from compromising associations. That separation was not schism. On the contrary it was separation entered into in order that schism might be avoided. The Christian Reformed Church separated from a certain organization in order that it might not separate, or might not, to say the least, risk separation, from the true Church of Jesus Christ. Similar was the great separation led by Abraham Kuyper in Holland. God has very richly and wonderfully blessed such separation as that. It is separation undertaken not in the interests of schism but in the interests of the true unity and purity of the Church.

2. Theological Consistency The Christian Reformed Church has never been content with being vaguely “evangelical” or “conservative” or “fundamentalist,” but has always endeavored to be truly “Reformed.” That is, it has not been content with some particular piecemeal presentation of the truth that the Bible contains, but has held firmly to that glorious system of revealed truth which is summarized in the great Reformed confessions of faith.

3. Indocrination by the Pastors In the Christian Reformed Church it is the custom for every pastor to base one sermon each Sunday on the Heidelberg Catechism. The result is that in the Christian Reformed Church the laity has been soundly and systematically indoctrinated, while in other churches preaching, even when orthodox, has for the most part been desultory and the people have not really been built up in the Faith.

5. Christian Schools If you go into a city where there are many people of the Christian Reformed Church, you will see scattered, here and there throughout the city, certain school buildings which are not public schools and arc not the parochial schools of the Roman Catholic Church. These are the “Christian Schools” in which an integral part of the instruction given is instruction in that system of truth that the Bible contains. These schools are not under ecclesiastical control, but are conducted by associations of parents. In an overwhelmingly predominant way, however, they are conducted and supported by the people of the Christian Reformed Church. Those people pay their taxes like other citizens, but in addition to that part of their taxes which goes to the support of the public schools they give—voluntarily and out of love to God and to the children of His covenant—what is needed for the maintenance of the Christian Schools. They love God and love their children too much to allow Christian instruction to be tagged on one day in seven as a kind of excrescence upon an education fundamentally non-Christian. They have tried to make the education of their children Christian throughout. God has wonderfully blessed them in that effort.