Communion Sunday has a very special place in the hearts of believers. I would say that at no place do heaven and earth come closer together than at the Lord’s Supper. The past, the present and the future of the glorious story of salvation are brought together. The Lord’s Supper is a meal of remembrance. It brings to Our attention the death of our Lord and Savior Jesus Christ. The believer who comes to the table of the Lord does this to proclaim the death of Christ. For him the Lord’s Supper is the monument to the fact that in the death of Jesus Christ God and man were reconciled. Everything at the table of the Lord speaks to him of the terrible death of him who came to die in his stead. He sees the cross in all its horror and at the same time in all its glory. He comes to confess that this sacrifice was brought for him and has brought him under the wings of righteousness which has made him free from the curse of sin. 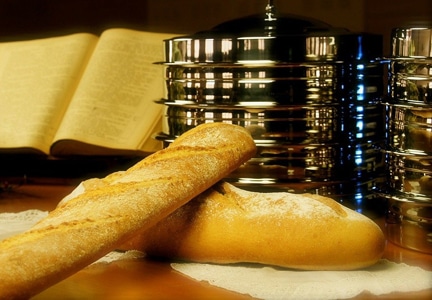 Out of the memory of the past is born the consciousness of the peace which the believer enjoys. For the Lord’s Supper is the table of the Covenant at which the believer and God meet above the altar of sacrifice. The believer comes in obedience to the command of God to rededicate himself to the covenant made With him by God in Christ Jesus. God once again assures him of his faithfulness and love and of the fact that the riches of Christ are truly his portion. Thus it is at the table of the Lord that our covenant consciousness is strengthened and enriched. It is here that the pilgrim on his way to a better land rests a while from the difficult and exhausting labor of being a witness for Christ and good soldier in his army, which claims all the kingdoms of the world for him who is the king of kings and the lord of lords. It is here that we sing:

With the abundance of Thy house

We shall be satisfied;

From rivers of unfailing joy

Our thirst shall be supplied.

The fountain of eternal life Is found alone with Thee

And in the brightness of Thy light

We clearly light shall see.

The celebration of the Lord’s Supper has also meaning for the future. It does not only assure us that God is our ally and that in our life we find him on our right and on our left; but it also gives us once again the assurance of the final victory. We are called to proclaim the death of our Lord until he comes again upon the clouds of heaven to judge the living and the dead. The Lord’s Supper reminds and assures us of a coming marriage feast. Our Lord and Savior shall return as the Bridegroom to take unto himself the Church as his bride. In faith we rest in the past in the death of our savior, and therefore rejoice in a living fellowship with God through him today, and upon it build the hope of an eternal good which no eye has ever seen nor ear have ever heard. It is no wonder that Communion Sunday is of such great importance to the worshipping congregation.

The question has been asked why we do not celebrate the Lord’s Supper every Sunday instead of only four times a year. As you undoubtedly know there are churches were the opportunity to partake of communion is presented every Lord’s Day. Experience has taught however that this has not led to a frequent use of the sacrament. Such practice separates the sacrament from the congregation. It is difficult and requires effort to rise to the spiritual level necessary for a fruitful use of the sacrament. The result has been that in churches where the Lord’s Supper was celebrated every Sunday only a few individual members would come to communion on any given Lord’s Day. The use of the sacrament became a matter of the individual and not of the congregation. The individual as a rule was not strong enough to lift himself continually out of the earthiness of his life to the spiritual heights demanded by the sacraments, The use of the sacrament became less and less frequent on the part of the individual. In many cases it became the custom of proclaiming the death of the Lord once a year and than preferably at Easter.

In order to improve this situation it was felt that the administration of the Lord’s Supper should be less frequent in order to encourage the actual use of the sacrament. I t was the conviction of the leaders in the church that once a year was not enough. Moreover the Lord’s Supper calls for a united action on the part of the church, an action strong enough to help one another to create an atmosphere favorable for the worthy partaking of the broken bread and the poured out wine. It was felt that this could not be done too often and so it was decided to celebrate the Supper of the Lord four or six times a year. History has proved the wisdom of this choice. The celebration of the Lord’s Supper is a celebration by the congregation. This is as it should be. It is especially at the table of the Lord that the unity of believers comes to expression.

Another tradition among us found its origin in the desire to help the congregation collectively and the individual member to come to the Lord’s Table in a worthy manner. It was decided to introduce the administration of the sacrament by the preaching of a preparatory sermon on. the Lord’s Day preceding the celebration of the Lord’s Supper. This tradition is rooted in the Scriptures. The apostle Paul writing to the Corinthians admonishes them in connection with the evil way in which they celebrate the Lord’s Supper. His words of admonition are of great importance to all Christians throughout the ages. To come to the table of the Lord in a worthy manner it is necessary that we prove ourselves, and so to eat of the bread and drink of the cup. For he that eateth and drinketh, eateth and drinketh judgment unto himself, if he discern not the body. The Lord’s Supper is only for believers and so we read in II Corinthians 13:5, “Try your own selves, whether ye are in the faith; prove your own selves.”

And thus the preparatory sermon becomes an introduction to a week of the searching of heart and life. The congregation is placed before the question whether we should or should not go to the Lord’s table. This custom has been and is of inestimable value for the spiritual life of the congregation. It is impossible to escape the question whether one truly belongs to the Church of Christ or whether one is only a hearer and not a doer of the Word. Four times a year every member of the church is placed before this question. And every true child of God will testify that it is good to be called continually to the searching of his heart and the examination of his life.