For it is written in the law of Moses, Thou shalt not muzzle the ox when he treadeth out the corn. Is it for the oxen that God careth, or saith he it assuredly for our sake? I Corinthians 9:9, 10a 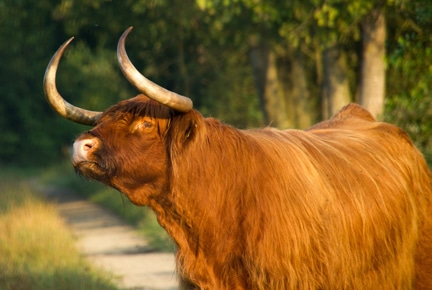 Frequently this Bible text is assumed to furnish an ironclad defense for a guaranteed annual wage for the minister of the Gospel.

In I Timothy 5:18 the same quotation is found, and the context there indicates a definite applicability to the care of elders who labor in the Word and doctrine. But I Corinthians 9:9,10a as under consideration in this article can hardly be said to warrant that application. It was in Corinth that Paul was challenged on his claim that he was truly an apostle. Paul had taken the liberty not to marry. nor to ask for a salary. Apparently this gave rise to doubt on the part of the Corinthians as to the validity of his claim to office.

We may imagine that their reasoning ran something like this: The other apostles are married and receive financial aid from the churches. Paul, a late comer to the apostolic office, is not too sure of himself. Just to be on the safe side he has chosen to do without these privileges, rather than endanger his status by placing a demand upon the Christians. Conclusion: Paul is not an apostle at all. Deeply aware of the precariousness of his position, he does not dare to claim apostolic privileges. Paul is a deceiver, and he knows it!

This charge is met by Paul with the text quoted above.

Obviously, the text contains far more than a mere demand for a financial stipend for ministerial labors. But we might say that the point which Paul is proving is that it is not compulsory to accept a salary in order to be a genuine apostle. His official status is provable beyond doubt: “the seal of my apostleship are ye in the Lord.” All those that work for the Gospel may live of the Gospel, Paul included. Yet they do not have to live of the Gospel. Paul might have taken a wife, or he might have demanded a salary like the others, but he chose not to do it. Why? Because of the case of the muzzled ox.

Moses and the Ox

The laws of Moses as found in the first five books of the Bible seem to present us with a veritable labyrinth of commandments, seeming often to be without “rhyme or reason.” The Israelites were simply swamped with laws. Seldom do many take the trouble to read the books of Leviticus and Deuteronomy because of their apparent indigestibility. They do not seem conducive to profitable meditation, and so we would rather read the gospels. Yet, ‘“Thou shalt not muzzle the ox when he treadeth out the corn” is here quoted in the New Testament, obviously to present us with Gospel truth and comfort. Is the ox, then, to be our comfort?

Moses wrote these laws. Moses is not just anybody, but he is the mediator of the Old Testament. To him is given the assignment to lead God’s people in the green pastures of the Promised Land. He is not merely a lawgiver presenting us with laws suitable for agriculture, etc. Nor is he the forerunner of the Society for Prevention of Cruelty to Animals! He is a type of Christ, and with all other prophets prophesies unto Christ.

Consequently every page of the Old Testament law manifests Jesus Christ. The free grace of Jesus Christ must be visible in every sphere of life, the field as well as the tabernacle. The fields of Israel are, therefore, not ordinary fields, as in Moab or Philistia. To be sure, they are made up of a similar soil. But there is one vital difference: the fields of the Promised Land bask in the rays of God’s grace. That land is the beginning of the new earth which the meek shall inherit. Over that land every fiftieth year the trumpets of jubilee were sounded to remind the people of the Covenant of the complete redemption in Jesus Christ.

That is why the ox might not be muzzled when he is threshing out the com. The animal must be dealt with in terms of the difference between the fields and stables of the righteous and the unrighteous. He must work, but he is working for a child of the Promise in the land of Promise. He must work, but he may eat, for God has joined the must and the may together, and no man may be allowed to put them asunder. The grace of Jesus Christ must be proclaimed everywhere; such is the purpose of the law.

God and the Ox

Does God care for the ox? Most assuredly—he feeds the fowls of the air. But “of how much more value are ye than the birds!”

God gives laws for the welfare of oxen, but he does so entirely for our sake. The laws pertaining to the oxen are not an end in themselves. In them the grace of Christ is illustrated. The grace exemplified in the union of must and may is given to the sons of the Covenant. The Redeemer did not come to redeem angels or animals, but he came to redeem Abraham’s seed.

This is the law that Moses wrote, according to which oxen must demonstrate grace. When Moses speaks he speaks in hope of that which is to come. Now Paul has seen the One who is greater than Moses. For the Mosaic law was fulfilled in Jesus Christ. He has borne all our burdens; he was compelled to bear them, being the Messiah. For him there were no privileges. His was the must, not the may. He hungered and thirsted while at work in our behalf, but God had muzzled him with the curse which was upon him.

Upon the Cross he suffered the terror of the must without the may. The illustration of grace in the case of the ox is beautiful, but the realization of grace in the fulfillment of that law is far more beautiful. It does not refer only to the apostle, but embraces everyone who acknowledges his Covenant relationship with Christ. God has joined together the must and the may. We must, therefore, bear our cross, but we may do so joyfully—the curse has been removed!

If we bear our cross without finding joy therein, we have never understood the suffering of Jesus. If we desire joy without accepting the fellowship of his suffering, we have no part in Christ who for the joy that was set before him endured the Cross. But salvation’s heirs have seen Jesus Christ revealed in the law regarding the muzzling of oxen. Gratefully, therefore, they perform Kingdom labor, both in tho Lords house and on the field. as heirs of the world to come. Paul and all his fellow Christian must work, but they also may eat and drink and do all things by the grace of Christ to the glory of God.

“Thou shalt not muzzle the ox…”

The Rev. Lambertus Mulder is pastor of the Christian Reformed Church at Neerlandia, Alberta in Canada.